While Latinos are just 23 percent of the SLO County population, they made up 56 percent of the local COVID-19 cases to date—which was close to their percentage of statewide cases, as of press time. 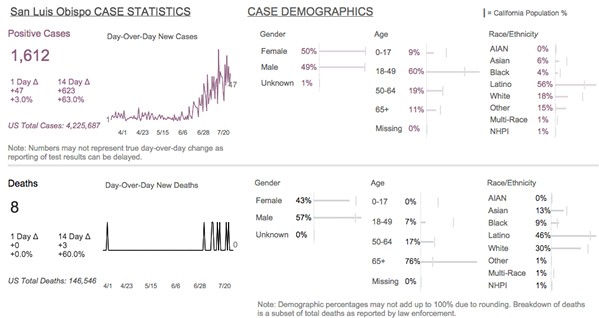 Their focus is to educate about ways to prevent COVID-19 and share what services are in place to support those in isolation and quarantine, including sick leave and unemployment, she said.

Shoresman also pointed to a Centers for Disease Control (CDC) July 10 report about populations that are historically affected by health disparities, including certain racial and ethnic minority populations, which are now being disproportionately impacted by and hospitalized with COVID-19.

According to the report, among the 2,729 COVID-19 patients cared for at Boston Medical Center between March and May, nearly half were Black, approximately one-third were Latino, and one in six were experiencing homelessness. Compared to Black or white patients, a higher proportion of Latino patients were hospitalized; this finding was most notable among persons 60 years and older.

Long-standing systemic health inequities and systemic racism—which influence life expectancy, underlying medical conditions, and health care access and utilization, as well as current work and living circumstances—are all factors that can play a crucial role in groups' risk for COVID-19, according to the CDC.

SLO County does not publish race or gender data for its confirmed cases, but the information is available at the state Public Health Department. Shoresman said the county is collecting data on race and ethnicity, but it is not complete.

"Testing sites were not always asking for this information, and while we have asked for it from early on, it is often hard to get people to provide it," she said.

County Public Health Officer Penny Borenstein has previously said that she believes the state's statistics on the county's confirmed COVID-19 cases are at least a day or two behind.