A hole in the ground

A local remembers 9/11 from New York

The E train barreled through the subway tunnel, listing and rattling along its tracks toward its final destination: the former site of the World Trade Center. Most days five years ago, the train would be full of suited businessmen heading toward one of the world's major hubs of commerce. Today a blustery wet Saturday it was mostly tourists and a few shoppers on their way to the famed Century 21 department store, upon which locals have bestowed the cynical motto "Bargains for Millionaires." 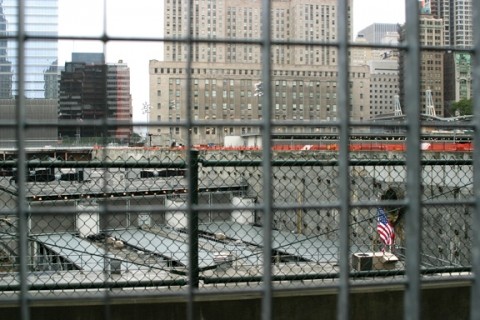 # As I sat rocking back and forth on the subway car, I couldn't help but wonder: What will it look like? What will I feel? I didn't really know. I was in New York for vacation save one small assignment: Visit Ground Zero and write about it. "And say what?" I silently asked myself as the train ground to a halt.

The 9/11 terrorist attack is imprinted on the collective conscience of the United States to varying degrees. Certainly New Yorkers claim the deepest stamp, a looming memory made fresher by the foot-dragging and squabbling over how to best memorialize the victims, celebrate the heroism of those who helped in the attack's aftermath, and revitalize an important place on a tiny island whose main function has always been to make oodles and oodles of money.

As one moves west, however, the imprint of 9/11 falls softer, and by the time you reach the West Coast, for most people, the event seems like something out of a movie, which of course it now is twice over. Hollywood has moved considerably faster than developers have in capitalizing on this empty piece of real estate.

When the planes hit the Twin Towers, I was even more removed than the opposite side of the continent, at that time on vacation in Cuba, of all places. Shock and outrage and helplessness best described my initial feelings. Then disgust at the warmongering and the squandering of international goodwill toward our wounded nation.

I couldn't help but think of other nations that suffer such horrors on a near-daily basis, places where U.S.-made weapons and ordnance explode and destroy and maim and kill without regard for innocence or guilt. In other places, like Iraq and Afghanistan and Lebanon and Israel and Kashmir and Darfur, people are dying so frequently that those citizens have become numb to the carnage. But not here. In the United States, we are not numbed by the ongoing death count. We're numbed by the forgetting. Here, terrorist attacks don't occur every day. I wondered, "Do we deserve to make such a big deal out of 9/11?"

So here I was, climbing up the concourse toward the site of the worst terrorist attack the United States has ever known. I came upon a broad landing and faced a substantial-looking fence, not the typical chain link surrounding most building sites. It completely surrounded the site, some 16 acres in all, a gaping scar on a city otherwise built tight, with no patch of ground left bare. I looked through the fence. I saw a big hole in the ground. Some trucks. The most rudimentary beginnings of infrastructure.

Attached to the fence just outside the subway station were photographs of the attack aftermath. A little girl squatting down beside flyers asking for help in locating missing loved ones. Horrified faces looking skyward (you didn't need to see what they saw to know it was beyond terrible). A man holding a sign offering a room in his home to someone in need. These were reminders of American compassion, reminders that even in our individualist, do-it-yourself, self-reliant nation we could and would and did come together in our time of need.

I made my way around the fence, trying in vain to find an angle from which to shoot a photo unimpeded by fence and concrete barrier. Security stood vigil, hard-faced men uninterested in my explanation of a job to do, a shot to capture. I continued on, making my way through tourists with video and still cameras, camera phones faces representing all cultures and scraps of unfamiliar sounds of foreign languages wafting in my ears.

Around I went, coming upon a small fire station, obviously added after the attack, swarmed by tourists who squeezed elbow-to-elbow to talk to a fireman who stood patiently in front of a fire truck, showing the crowd photos from a picture book released just that week that depicted the aftermath of 9/11.

"Look at that rubble," he said, pointing to an image. "How do you find anyone in that?"

Clearly visible on the station wall was a shrine to the "Ten House Bravest," six fallen firemen who went in to help the victims only to become victims themselves.

I kept walking and found a nearby building, making my way to the second floor where a broad window looked down on Ground Zero. An older man held a video camera to his face and narrated: "There it is, a solemn sight, a terrible reminder. I guess that's all there is to say." He stood silent a moment, shut off the camera and lowered it, took one last look, and walked away.

I watched him leave and then I turned back to the former World Trade Center site and took a long look. Yes, there it is. A hole in the ground waiting to be rebuilt upon. I slowly packed up my camera and made my way back to the subway, which would whisk me up to the Museum of Modern Art so I could look at Picasso's Les Demoiselles d'Avignon and Van Gogh's The Starry Night. I walked through the galleries looking at one masterpiece after another. I looked, but all I could see was a hole in the ground.

Glen Starkey returns from vacation next week. Contact him at gstarkey@newtimesslo.com.