Pops by the Sea brings Hollywood to life ... musically 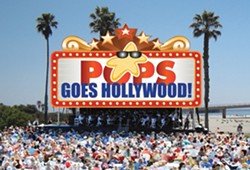 New Times Tell me something about Damon Castillo that we may not know.

New Times The SLO Symphony has some kind things to say about you, and this is the first time they have played rock music. What do you think about that?

Castillo I’m so excited. It all began with the CD release. Michael Nowak (SLO Symphony maestro) heard us play live and we talked about doing something together and when they formally invited us to be a part of the Pops I was excited, but also intimidated and scared.

New Times In what way were you scared?

New Times It’s a pretty forgiving audience. Have you ever been?

Castillo No, but I hear the wine is flowing.

New Times Yes, and the Champagne! What will you bring to Pops?

Castillo I’m not going to reinvent my band or rewrite my music but I will say this, we play in Hollywood all of the time. If anything, rock’n’roll, pop music, is linked to Hollywood and hopefully people will feed into the theme of the show.

New Times What is your experience with the SLO Symphony? How have they shaped your career since you are from the Central Coast?

Castillo Over the course of the last season I really got turned on to the symphony’s music. I got turned on to a whole other world of music and it’s been inspiring for me over the last year. I’ve always flirted around the edge of the symphony but then I saw Craig Russell perform at the mission and I was blown away. A whole new world of inspiration. Something I wasn’t aware of before.

New Times What can audiences expect on Sept. 6?

Castillo Things are changing so much I am not even sure what to expect. I am going to be excited about this whole new world of music and from me, they can expect … it will be a great show. It will be more than just a band or more than just an orchestra playing together—something bigger and better. Reflecting on your initial question some more, I think it’s important that I decline to comment. I’m like the male version of Greta Garbo ... I need to preserve a certain aura of mystery about myself.