A journey into the world of heritage pork

Let’s cut to the meat of the matter. Have you heard of pork butter yet?

No? Let’s fix that. I had no idea what it was either—that is, until my husband and I attended a drool-inducing Pork to Plate seminar hosted by FARMstead Ed at J&R Meats in
Paso Robles.

The moment local cookbook author Brigit Binns uttered those two words to the group, a collective murmur washed over the crowd. Foodies turned to farmers, farmers to bacon fetishists. I actually laughed with pure giddiness. 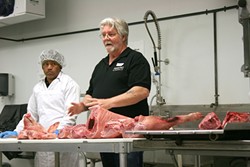 Pork butter? Had we heard that correctly?

Let me reiterate: This seemingly fantastical condiment is indeed a thing. It’s, for all intents and purposes, pork fat that you’re allowed—even encouraged—to slather on your food. It’s what my husband would call “fancy fat kid style.”

Often rendered from leftover bits of charcuterie, the flavorful pork fat is whipped with vinegar and spices. At room temperature, it melts—allowing for tons of spreadable options (my mind went directly to lubing up sourdough for a porky grilled cheese).

This life-changing knowledge (think of the popcorn applications!) represents just a small fraction of what I learned during my afternoon foray into “the other white meat.”

Vegetarians need not read on, lest they wish to be converted. We are delving deep into the belly of the beast. And speaking of belly: just wait till you hear about uncured pork belly bacon.

According to J&R Meats Managing Partner Jim Fogle, the only downside to his famous uncured bacon is that you have to cook the entire package in one sitting, as the meat won’t keep over the course of a few weeks. 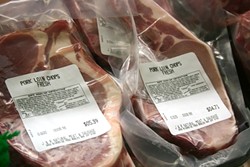 “Does anyone in this room even cook a small amount of bacon at a time?” asked FARMstead Ed Founder Lynette Sonne, causing an uproar of laughter among the group of pork enthusiasts.

Truth be told, not all bacon is created equally. How a pig was raised and processed has a lot to do with it.

If you’ve ever ordered the heritage pork chops, then you know what I’m getting at. “Heritage pork” is exactly what it sounds like: an old-fashioned pork breed raised in the old fashioned way.

You might already know that industrial pigs are bred to grow as fast as possible, and, as a result, their meat shows thicker muscle fibers. In comparison, a preindustrial heritage breed will grow more slowly, creating finer muscle fibers. And that’s just the start: Heritage pork is traditionally raised on pasture without unnecessary hormones.

Basically, the goal for these farmers is to provide a happy, natural pig life before slaughter. Those choices shine through in the meat.

I was recently listening to Fresh Air with Terry Gross on NPR with interviewee and Pig Tales author Berry Esabrook. The food journalist said he was inspired to write a book about pork production thanks to a pork chop.

“I had never had a heritage pork chop from an old-fashioned pig breed raised on pasture,” Esabrook told Gross. “When I had it, it was an epiphany not unlike a pale winter tomato from the supermarket and an heirloom from the garden—it was that big of a difference.”

The author’s first experience with heritage pork—biting into that super tender, deeply rosey-hued meat—resonated with me. I realized that it truly takes three things to cultivate this kind of flavor: the pig, the farmer, and Mother Nature. When all three come together, flavor has no bounds.

Jack Rudolph of Stepladder Ranch in Cambria finishes his heritage hogs with organic avocados for a soft, rich flavor.

Rudolph’s farm was established in 1870 and has been family run for three generations. Once dotted with cattle, the land’s now planted with about 4,000 mature avocado trees. The Stepladder pigs, a heritage breed from England called Gloucestershire Old Spot, enjoy an ocean view and plenty of wind in their floppy ears.

“They run around in the woods; they don’t have fences,” Rudolph said. “They’ve got 200 acres of forest; it’s a good deal.”

Allowing the hogs to live this way does have its disadvantages (wild mushroom patches don’t stand chance), and it makes for astonishing meat. That pork goes directly to chefs in SLO County as well as to everyday people looking to buy whole or half pigs. Maybe you’ll see Rudolph at the Cambria Farmer’s Market, where he sells his Haas avocados alongside the pork that once ate them.

Amanda Webb-Gardner is also part of the local heritage pork club, selling her hogs to local families in the know. The Paso Robles hog farmer and Paso Robles High School agriculture teacher was born into a pig-raising family.

“I was literally almost born in a pig pen,” Webb-Gardner said during the presentation. “We’ve raised pigs my entire life. Our farm is off Estrella Road in Paso, surrounded by vineyards and hayfields.” 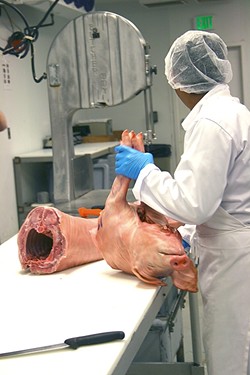 In its heyday, the farm raised 300 pigs. After having kids, Webb-Gardner cut back and now raises a manageable handful of meat and show animals.

The farmer raises a range of heritage breeds, including Berkshires, which she said, have a sweeter meat and golden hue.

“We’ve always raised our own meat; there’s no comparison between home grown versus store bought,” she added.

Now for the part that most meat eaters have little contact with: The harvesting and processing of that delicious “home-grown meat.”

Local producers and family farms can truck their hogs to Creston Valley Meats in Creston, J and G Lau Family Meat Processing Center in San Luis Obispo, or call up J&R Meats and have their Mobile Harvest Unit come to the herd. The USDA-inspected unit—which, from the outside, looks like a nondescript commercial truck with a ramp—is the only one of its kind in California. All of Stepladder Ranch’s hogs are processed through the compact unit.

During the FARMstead Ed seminar, I not only got the chance to watch how an entire pig is processed into parts (loin, ham, spareribs, picnic, Boston butt, bacon/belly, feet, and jowl), I got to take a peek inside the Mobile Harvest Unit, which boasts a gleaming stainless steel interior. Before processing the hogs are quickly killed by a gun that inserts a rod directly into the brain.

I should mention that a group of three anti-meat activists attempted to rain on our parade. During our tour of the Mobile Harvest Unit—and later, while we sat down to eat a splendid meal of pulled pork, chili, spare ribs, and wild boar paired with Ranchero Cellars wine—they repeatedly chanted “It’s not food; it’s violence.”

Personally, I agree. It’s not just any food. It’s really, really good locally-sourced food raised in a humane, sustainable manner. As for violence, I just don’t see it that way. We give to the animals and they give back to us. Eventually, we all go back to the Earth—back to that patch of wild mushrooms on the Stepladder Farm.

As it turns out, pulling up a pickup truck and blasting country music from the stereo is a pretty good way to get rid of barbecue haters. As we dug into the juicy, tender meat, I looked around at the new friends I had made. Pork sizzling over a barbecue has a way of bringing people together. Could there be anything better?

Well, of course, there’s also the promise of pork butter.

Hayley Thomas is enjoying a ham sandwich while reading your angry letters at hthomas@newtimesslo.com.