A Knight to remember

Why not celebrate Christmas in Cambria with Jill Knight?

Picture yourself relaxing at the end of Christmas Day, settled back with a full tummy in a comfy overstuffed sofa, sipping your favorite libation in front of a roaring fire, all your obligations successfully fulfilled, while your heart is warmed and your ears are soothed by our own local nightingale, Jill Knight.

It’s no surprise that award-winning singer/songwriter and Atlanta native Jill Knight cites the southern rock she grew up with as being among her many musical influences. You can also hear Jackson Browne, Ricki Lee Jones, and a bit of Townes Van Zandt in her rich, inventive songwriting.

But it’s her clear, soulful voice that grabs listeners and makes them sit up and pay attention. India Arie once said, “I love great voices, and when I heard Jill it stopped me in my tracks and I had to listen.” Arie even invited Knight to be her opening act.

A finalist at the Telluride Troubadour competition, a finalist at the National Academy of Songwriters songwriter of the year competition, a finalist in Billboard magazine’s best unsigned band contest, a regional bestseller in Album Network magazine for her album Future Perfect, a finalist in the Acoustic Live songwriter competition—those are just a few of Knight’s accomplishments. She’s toured and shared stages with Shawn Colvin, Michael Hedges, Phoebe Snow, David Wilcox, Richard Thompson, Little Feat, and many others.

“It’s hard to say which is better—the song, or the way Jill Knight sings it,” according to Performing Songwriter. Dirty Linen says, “Knight approaches her music with an unadorned intensity; her songs pack an emotional punch rich in the details of everyday experiences. … This is first rate, high quality music.”

Her many local fans know there’s bound to be some fun booty-shaking when Knight’s funk band rips it up. She’s also been performing as a soul-touching trio with violinist Brynn Albanese and bassist Eric Williams. It’ll be a slightly different combination for the Jill Knight Trio on Saturday, Dec. 25, at 8:30 p.m. at the Cambria Pines Lodge (2905 Burton Drive, 927-4200)—Knight and Williams will be joined by Brian Hermann on keyboards. And remember, there’s never a cover charge at the Lodge, which presents live music in a homey atmosphere every night. Special thanks to the folks at the Cambria Pines Lodge for keeping so many local musicians working … or is that playing?

Well, it would hardly be New Year’s Eve without live music, and you’ve got plenty of choices for ringing in 2011 while surrounding yourself with melody. From theaters to nightclubs to wineries, local venues are putting on parties for your enjoyment. Your only job is to pick a place to celebrate!

Let’s start with what’s happening at local theaters—and we’re not talking movies. If you’re a fan of musical legends like Frank Sinatra, Elvis Presley, and Patsy Cline, it’s your lucky day! Writer/producer/co-director (with Bill McLaughlin) Mary Meserve-Miller has put together the Best of the ORIGINAL Legends Series, opening at the Clark Center for the Performing Arts in Arroyo Grande on Friday, Dec. 31, with a special New Year’s Eve performance that includes an after-party.

“This is quite a show,” Meserve-Miller told New Times. “The singers are phenomenal. Every one is just knock-your-socks-off brilliant!”

The show (which runs through Jan. 15) includes a live orchestra, complete with a horn section, and stunning choreography by Suzy Miller and Molly McKiernan. After the performance on New Year’s Eve, there’s a free party at Tanner Jack’s steakhouse, with food, a no-host bar, and a taxi home. Tickets for the Best of the ORIGINAL Legends Series cost $35 for adults, $20 for students, with all proceeds benefiting the Nipomo High School Drama Scholarship Fund. Order yours by calling 489-9444 or log onto clarkcenter.org.

While we’re on theaters, don’t forget the Great American Melodrama’s Holiday Extravaganza. The special New Year’s Eve show on Friday, Dec. 31, includes a Santa Maria-style barbecue dinner along with all the laughs. Tickets are available by calling 489-2499.

Out in club-land, let’s start with the New Year’s Eve celebrations where you won’t have to pay a cover charge, an especially welcome feature for the working poor—the folks who just saw their income taxes go up. The Otter Rock Café (885 Embarcadero, Morro Bay, 772-1420) presents rockabilly and roots-rock Americana with the Cadillac Angels on Friday, Dec. 31. The Angels’ frontman Tony Ridge (the new name, or perhaps the stage name, for Tony Balbinot) writes to tell us about the group’s 16th (!) recording, Lonesome Traveler, which was recorded, mixed, and mastered in just three days at Good Row Studio in Sedona. Tony wrote nine of the 10 tracks, singing on this recording about the foreclosure epidemic and domestic violence, among other gritty topics. 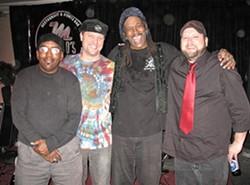 Also in Morro Bay, the Fuel Dock (900 Main St., 772-8478) will feature Shival Experience and their high-energy dance grooves, ranging from reggae and rock to funk, blues, and soul, all anchored by frontman Al “Shival” Redwine. The dance party is free, so mark your calendar for Friday, Dec. 31.

Farther up the coast, the aforementioned Cambria Pines Lodge will no doubt be rearranging the tables and overstuffed chairs in the fireside lounge when Shameless takes the stage and fills the dance floor on Friday, Dec. 31. There’s no cover charge, and the fire in the fireplace is free, too!

In the North County, the Paso Robles Inn (1103 Spring St., 226-4925) presents a New Year’s Eve bash with no cover charge, featuring Whiskey D performing in the Cattlemen’s Lounge. Party favors and a midnight champagne toast on Friday, Dec. 31, are also on the agenda for the celebration. 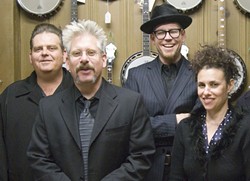 A fun and affordable musical event is planned for the Red Barn in Los Osos (2180 Palisades Ave.), part of the Red Barn Community Music Series. Old-time bluegrass bands Little Black Train and Black Crown Stringband will each play a one-hour set on Friday, Dec. 31, following a community potluck supper and old-time jam session at 6 p.m. With an all-star lineup of veteran string wizards Kenny Blackwell, John Weed, and Stuart Mason (and a surprise guest or two), Little Black Train will perform vintage fiddle tunes and old-time songs, exploring the roots of bluegrass from Depression-era gospel to Appalachian and Celtic dance tunes. Black Crown Stringband is a Bay Area supergroup, first-place winners at the 2008 Berkeley Old-Time Convention Stringband Contest. Listen up for that high, lonesome Bill Monroe-esque sound! The suggested donation is $10 at the door. More info: 534-9021.

Ten bucks is also the cover charge for the salsa dance party with De la Bahia at the Inn at Morro Bay (60 State Park Road, 772-5651) on Friday, Dec. 31, at 9 p.m. Appetizers and a champagne toast are included in the fun, and dancers are rejoicing because of the wonderful wooden dance floor. Master conguero Max Garduno—who toured with Eddie Cano, Gerard Wilson, and Willie Bobo—will hold down the rhythms.

In the South County, the SLO Down Pub (1200 E. Grand Ave., Arroyo Grande, 473-0102) is the place to be for a dance party, especially if you’re a blues fan. Dr. Danger will be pumping out the blues tunes on Friday, Dec. 31, when the cover’s $10 and reservations are recommended.

Harry’s Night Club and Beach Bar (690 Cypress, Pismo Beach, 773-1010) is bringing “L.A.’s ultimate party band,” Lamour, for a special party on Friday, Dec. 31. Lamour has recorded and toured with Shania Twain. Tickets for the bash are $25 per person.

Shagadelic, baby! That’s the theme for the New Year’s Eve party featuring the ever-danceable groove rockers Still Time at the Cliffs Resort in Shell Beach on Friday, Dec. 31. And get this, folks: It’s the first time ever for Still Time to perform a local show for New Year’s! These guys are often busy touring nationally, sharing the stage with musicians including Ben Harper, Michael Franti, UB40, and Pepper. They’ve come a long way since their low-key beginnings in jam sessions behind the Cal Poly dorms. Tickets are $70 per person, or $125 to $150 per person if you want the five-course dinner. Visit cliffsresort.com or call 773-5000.

Three Martini Lunch brings their Sinatra-esque sound to the Lido at Dolphin Bay Resort (2727 Shell Beach Road, 772-8900) in Shell Beach on Friday, Dec. 31, from 8 p.m. to midnight. Dinner is also served, and you’ve got your choice of a champagne toast at 9 p.m. or at midnight.

And of course, don’t forget Unfinished Business, playing ’60s rock’n’roll at the South County Regional Center in Arroyo Grande on Friday, Dec. 31. That’s dinner and all the dancing you can manage, for $75 per person. For tickets and info, call 929-5211 or visit unfinished-business.org.

The party at the Ventana Grill (2575 Price St., Pismo Beach, 773-0000) is sold out for New Year’s, so if you didn’t get a reservation, you won’t have a chance to see Dave Aguallo on Friday, Dec. 31. His fans from all over the state go wild over his Motown, classic rock, country, and oldies music. He promises you’ll have more chances to catch his show in 2011.

What could go better with the fine brews of the Paso Pour House (1331-A Vendels Circle, 239-2868) than Scottish and Celtic music? Those tunes are just made for beer drinking! Get ready for the Gillie Wheesels on Thursday, Dec. 23, at 8 p.m. The band’s members are Guy Wallace (vocals, guitar, resophonic guitar), David Foster Evans (vocals, bouzouki, guitar), Barry Johnson (bodhran, whistle, cajon), and Frank Nelson (accordion, fiddle, mandolin). Here’s what they write about themselves, even supplying the appropriate accent for us: “Hametoon—anywhere ayont California’s Central Coast an’ beyond whair a warm fire burns, an’ good ale an’ single-malt whisky flows, is hame tae the Gillie Wheesels. Harkening the spirit of the nefarious Scottish travelers, the Gillie Wheesels dominated the Kingdom of Fife in Scotland during the late 1700s under their gypsy king, Charles Graham.” Aye!

Next up for the Famous Jazz Artist Series at the Hamlet on the northern edge of Cambria is the George Shearing Quintet Alumni Band, under the direction of Charlie Shoemake. The group was formed after George Shearing’s retirement last year. Recreating the famous quintet’s sound are former members Ron Anthony on guitar, Colin Bailey on drums, Luther Hughes on bass, and bandleader Charlie Shoemake on vibraphone. Shearing’s spot at the piano is filled by Joe Bagg. Also appearing will be vocalist Sandi Shoemake. Two performances are planned for Sunday, Dec. 26, one at 4 p.m. ($15) and one at 7:15 p.m. ($12). You can catch them both for $20. Call 927-0567 for reservations.

And just FYI, local singer and guitarist Phil Cisneros has passed two video auditions and is now being asked to show up in person for auditions in February for TV’s America’s Got Talent. He’s well known to local folks who’ve seen and heard him at his regular gigs at Jimmy Bump’s Pasta House in Los Osos and Del’s Pizzeria and Italian Restaurant in Shell Beach. Follow his progress at reverbnation.com/philcisneros.

All you Live Oakies, listen up! You can save $10 on a full festival ticket if you buy yours before March 11. The Live Oak Music Festival of 2011 is set for Father’s Day weekend, June 17 to 19, at the Live Oak Camp near Lake Cachuma. Now that’s something to look forward to in the New Year.

Contributor Kathy Johnston is doing her best to fill in while Glen Starkey’s on staycation. Send him holiday greetings at gstarkey@newtimesslo.com.