Husbands Joseph and Jack Griffin-Janey said “I do” three times, and each time it was to each other. While three marriage ceremonies for one couple may seem extravagant, only one of the three ceremonies was a sentimental affair with friends and family present. The other two times—one at city hall in San Francisco in 2004, the other at city hall in San Luis Obispo in 2013—were strictly so Joe and Jack could make sure they were in fact legally married.

While same-sex couples married in California in 2008 and later kept their federally recognized marital status, those who married years earlier, like Joe and Jack, did not. For a short window of time in February and March of 2004, the city of San Francisco issued marriage licenses to same-sex couples, which resulted in President George W. Bush voicing support for a constitutional amendment that would keep marriage between a man and woman. By August of 2004, the California Supreme Court had voided the San Francisco marriages.

“We thought we were a part of history that day, and then, President Bush annulled all same-sex marriages” Jack said.

Last year, when same-sex marriage became legal across the country, it seemed like a milestone to the Griffin-Janeys. But on June 12, a man shot and killed 49 people in a gay nightclub in Orlando in what is being called the worst shooting massacre in America’s history. Prior to the tragedy, Joe, an artist who is also studying to be a nurse at Allan Hancock College, hadn’t created much of anything for months. Two days later, he was back in his home studio, painting. His work, best described as abstract portraits, will be displayed at the GALA Center Gallery’s 20 Years of Pride Show. 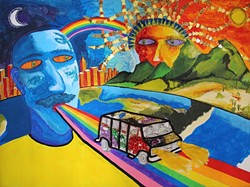 Several days after the shooting in Orlando, the couple attended a vigil at the Mission in SLO for the victims.

“When Sandy Hook happened I guess I felt shock, the same kind of shock I felt when I heard about the shooting in Orlando, but I guess the difference is this happened to a group I identify with,” Joe said. “The silver lining was that people really came together. I was really proud of this town—that doesn’t even have a gay bar—to get together and have a line of people wrapping all the way around the mission. There should be a solidarity and less divisiveness.”

For a number of years, Joe played music as a member of the “Rocket Roll” band the Phenomenauts (He wore a robot helmet during performances. Toilet paper was launched at the audience). He even wrote an unpublished book about his time in the music scene, The Universe According to Joe. His art projects range from paintings to pieces using wine corks, tin foil, pennies, and cardboard. Yet, the 20 Years of Pride show at the GALA Center will be Joe’s first time displaying his art. Being creative has always been something Joe did for himself.

“Everybody thinks ‘Oh, I would love to do that,’ but if you don’t do it or never explore those kinds of avenues then you’ll never know,” Joe said. “One thing I do know is that I’m happiest when I’m creating.”

Last year, one particular figure in the news caught Joe’s attention. Kim Davis, the county clerk in Rowan, Ky., who received national media attention because she repeatedly refused to issue marriage licenses to same-sex couples on the basis of her religion, acting in defiance of a U.S. federal court order.

Joe’s colorful, abstract depiction of Davis, Inside the Mind of a Mad Woman, is intense. It’s like a car crash that you want to look away from but just can’t. Davis’ skin has the tone of a green monster. Her eyes burn bright red as they stare at you. “FUCK YOU” is emblazoned on the bridge of her glasses. The confederate flag flies in the background, and Davis has a rainbow-hooded robe that falls over her head, in the style of those Catholic saints you sometimes see depicted on candles.

“This is what would be in my brain if I ever met her in person,” Joe said.

On a happier note, Joe’s other piece in the show, The Travelers, is an homage to those who have paved the way in the LGBT community. A rainbow road bursts out of a giant blue man’s mouth and a sparkly little rainbow bus glides forward on it. An approving sun watches from above. The painting reminds Joe of people like his husband’s uncle, a man who wasn’t accepted by his family in his day and died from AIDS alone.

“This show isn’t about any one individual artist, it’s about the whole thing, and it’s more timely than ever,” Joe said. “It’s going to showcase a slice of the LGBT community.”