A little piece of Harmony: Harmony Headlands State Park is worth the while

I’ve passed it many times while driving north up Highway 1 on my way to other hikes and adventures, but until recently I’d yet to visit the 748-acre Harmony Headlands State Park, located just south of the town of Harmony.

Open to the public since 2008, the park was once set to be developed into several home sites, but with a little help from the American Land Conservancy, it is now a state park that offers a 1.5-mile trail running through grasslands and coastal scrub and opening up to the rocky cliffs of the headlands that overlook the ocean.

When I arrive on an overcast Sunday afternoon, the small parking lot at the trailhead is nearly full, only holding around 10 cars or so, but I find a spot without waiting. A pile of broken auto glass beneath the truck parked next to me was not the most welcoming of sights, but unfortunately visiting natural places often means taking the risk of leaving your vehicle unattended in a sparsely or unpopulated area. I say take it.

The Headlands Trail is an easy hike and for the most part a single path that snakes through grassy hills down to the shoreline, with an offshoot near the start of the trail that leads to an old bunkhouse. The areas surrounding the path contain sensitive habitat, and signs ask visitors to remain on the designated trail.

But even from the beaten path I see a variety of plants and wildlife as I make my way toward the sea. Many species of birds frequent the park, and not long after setting out on the trail I encounter a pair of wild turkeys foraging in the grasses just a couple of feet from the where I stand. In all, I see at least six or seven turkeys, both toms and hens.

Coveys of quail cautiously scurry out onto the path returning to cover as I approach, red-wing blackbirds call out from stalks of mustard, turkey vultures soar along the hill tops, and a white-tailed kite hovers gracefully in mid-air.

Ground squirrels creep around rocks near their burrows, and a cotton-tail hops beneath the underbrush. 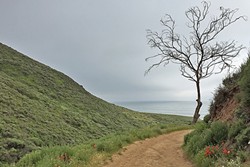 Pinacate beetles (also referred to as stink beetles or stink bugs due to a defense mechanism in which they omit a noxious smell while standing on their heads) are in abundance on the surface of the path, some of which had already fallen victim to other hikers’ shoes.

After passing by one last, lone tree, which are scarce in the area, the trail opens up to views of the rugged coastline backed by hills of green sporadically dotted with the white, pink, orange, and purple of wildflowers. A turkey vulture soars up and down the shoreline as I walk along the cliffs looking for a spot to access the beach.

I find one near the northwest boundary of the park, and an easy climb down leads to mostly rock-covered beaches and tide pools in which sea anemones are numerous. After exploring the jagged terrain for a while and simultaneously trying to avoid the anemones, I climb back up to the bluffs.

After pausing to appreciate the panoramic beauty for a moment, I follow the trail back toward my car, keeping my eyes and ears peeled for wildlife along the way, and stopping to take a closer look when inclined, just to make sure I don’t pass anything by.

Calendar Editor Trever Dias is ready to go outside again, but nevertheless can be reached at tdias@newtimesslo.com.