A little skater with limitless talent 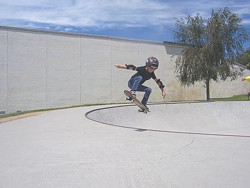 Arroyo Grande resident and 8-year-old Monument Board Shop team skater Elijah Muguira plans on shredding a lot in the coming months at the Monster Skate Park series. Muguira has ollied over full cups of coffee and water bottles, and is known as one of the youngest, most successful skateboarders around. He is also a man of few words. Muguira and his proud parents, Liz and Moses, sat down and talked with New Times, skateboard in hand.

New Times How long have you been skateboarding, Elijah?

New Times And how many years is that?

New Times Who introduced you to the sport?

Muguira I picked up a skateboard and got on it and then ... I don’t know how. I just stuck to it.

New Times So you’re a natural. What do you like about skateboarding?

Muguira It entertains me when I get mad or something, that’s what I do. And when I’m happy I skateboard.

New Times Which older skateboarders do you look up to, who’ve influenced you?

New Times How did you get involved in the Central Coast Monster Skateboarding contest?

Liz Tell her about the first contest you skated in when Monument saw you and decided they wanted to sponsor you.

Muguira I signed up but then I didn’t want to go out there and then they helped me by going out there with me, and then I stayed out. I won first place in my first contest.

New Times Wow, when was that?

New Times He tried his first contest without a sponsor?

Liz Yeah, and then Monument’s team manager at the time said, “If you do this contest, we want to sponsor you.” Elijah wanted to skate but he was scared, nervous and crying on that first run. Monument has been a great support.

New Times Where is your favorite place to skate?

Muguira The Grover Beach Skate Park, because that is where I first skated and won. [He will be skating there on April 4.]

Liz Yeah, even at 1 year old he was mature. We called him a little old man.

New Times Do you practice, Elijah?

Muguira Yeah. I’ll go to the skate park and think about what I want to do for my runs. I plan it ahead of time.

New Times Give me an example of how you’ll wow them at Grover.

Muguira I’ll go out on the big bowl and do a big ollie.

New Times And you brought your skateboard with you today. [It’s almost as big as he is.] Show me that thing.

Moses He goes through a lot of boards.

Muguira I haven’t broken one yet, but I’ve worn them out.

New Times Do you get nervous before a contest?

Muguira I’m excited and nervous at the same time.

Moses Why should people skate, Elijah?

Muguira Because it’s exciting and it gets my anger away.

Liz How do you feel when you’re cruising on your cruiser?

Muguira Uhhhhhh, awesome. [He sticks his tongue out.]

New Times Let’s end it on that note.

Christy Heron is so over you. Leave her alone at cheron@newtimesslo.com.