A local State of the Union address for 2015

Can we shift our way out of a slide into the abyss?

I thank you very much, and now I ask that you please be seated.

2014 and its predecessor were amazing years in history as is well known by all who shared them, not only in our great nation but those having done so in countries abroad as well. 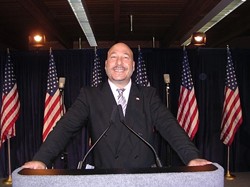 We watched live-wire jetliners vanish without a trace, banksters being rescued, and genocidal dogmatics elevated to sainthood. In America, we endured the offhand propensity for poorly trained and rarely prosecuted law enforcement personnel to address racial tensions with the barrel of their service revolvers.

We continue to label people “aliens,” though they come from the same planet we do.

Perhaps it would be wise for us to envision what might come next if indeed we were all made to speak the same language. The next step could be to all wear the same shoes, wear the same ties, drive the same cars, and even hold the same opinions. In Paris, proponents of such extreme monoculture recently attempted to silence freedom of expression and diversity with terror tactics. In a sign of our troubled times, authorities then handed instant victory to these terrorists by immediately arresting scores of people afterward who voiced any support for their cause, however misguided their tactics.

Ask yourself, what is the fate for those who choose not to be Charlie Hebdo? A dragonfly-sized drone on the windowsill, eavesdropping on their morning coffee, or maybe a larger one dropping bombs on their wedding reception? It is no longer enough to agree to disagree. We must be willing to defend those with whom we disagree, and do so without fear of being labeled an enemy combatant.

In Guantanamo, a long-held prisoner has written a book about his time in that shameful, still open American torture chamber. It has been heavily redacted. One wonders if he will go on a book tour after being tortured in prison, and will his torturer Dick Cheney go to prison after completing his book tour.

With the Republicans now firmly in control of the United State Senate, and their Democrat counterparts keeping them there by disenfranchising their own voter base, it is unlikely a new world paradigm is on the horizon to replace the new world order.

And without that paradigm, America, along with the rest of the world, can only continue our slide into the abyss of a not-so-brave new world, one without glaciers, fresh air, truth, or freedom.

Thank you and have a good evening!