A local tells his family's story of fleeing the Armenian genocide

When Bruce Badrigian was battling pancreatic cancer in 2012, all he could think about in the hospital was his father and the sacrifices he'd made to provide for his family.

In his younger adult years, Badrigian's father died and left Badrigian wishing he had spent more time learning about his Armenian heritage. He learned a lot about his family's history of fleeing the Ottoman Empire and starting anew in the United States from his grandmother, Isgouhi, and the aunts who helped raise Badrigian and his four siblings while his parents worked. 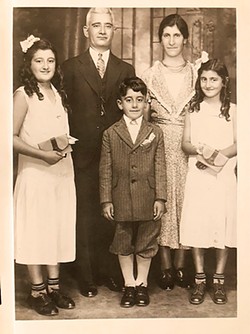 "I always had an itch to tell this story and the story of other Armenians that I have come across over the years," Badrigian said.

During the cancer recovery process Badrigian had a lot of time to write, research, and go over recordings he had made over the course of the last 15 years. The recordings were of other Armenians who had shared their family histories with him—of fleeing the Ottoman Empire, losing great-family members in the Armenian genocide of 1915, coming to the United States, and their successes in this country.

With years of information in hand, Badrigian wrote a historical fiction novel released in 2015 and re-released in early 2021, Armenia's Fingerprint. The story focuses on two courageous Armenian teen sisters who refused to lose their faith and dreams in the face of adversity during 1915. Although the story is loosely based on his family's history, it pays homage to the many people who shared their stories of courage and refuge with him.

According to the Armenian National Institute, the Ottoman Empire embarked upon a systematic decimation of its civilian Armenian population on April 24, 1915, during World War l. The empire's rulers and most of its subjects were Muslim while its Armenian communities were of Christian faith. During this time, Armenians were sent on death marches through the Mesopotamian desert without food or water.

Badrigian said his grandmother's first husband was killed in the home that she and her husband built.

"The Turks had invaded their village and he tried to fight them off. He told them to flee out the back door and get into the forest. He yelled out to her, to not let them 'get our girls,'" Badrigian said.

The women listened, fled out the back door of the house, and went up a hill. From that vantage point they could see the men dragging out the body of her first husband as they simultaneously witnessed a line of Armenian villagers being marched out of their community.

"No one would help the Armenians because ... if you helped an Armenian, you would be put to death as well. So [his grandmother and her three daughters] did not last long," Badrigian said.

Her daughters starved to death.

Isgouhi was barely surviving when Badrigian's grandfather, Kachadoor, found her. He and his two sisters, now refugees, nourished and aided Isgouhi as they fled.

The four made it to Musa Dagh on the Mediterranean Coast, where they joined a rebellious group fighting off the Ottoman Army on Mt. Moses. A French battleship that was patrolling the sea stopped to save the refugees after the group held up a white bed sheet with a red Christian cross on it.

That ship, Badrigian said, saved thousands of Armenians. It took them to Egypt, where they were put into a refugee camp for about a year before his grandparents were granted passage to Ellis Island.

"No money, no command of the language because they couldn't speak English. But the first thing they did was find a church and get married," he said.

At the time, Badrigian said there wasn't enough work for the number of refugees who were arriving in New York, so his grandparents followed the advice of a fellow refugee who said factory work was in abundance in Worcester, Massachusetts.

Simon had five children; Badrigian is the oldest.

In 2019, Badrigian and his wife visited Yerevan, the capital of Armenia, and joined hundreds of thousands of people in the walk to the Tsitsernakaberd Armenian Genocide Memorial to lay flowers at the eternal flame for the 104th anniversary—a year before the pandemic.

He said men and women were carrying flowers of multiple colors and children on their shoulders down the narrow path to the memorial to pay their respects. To be able to research his family's beginnings, understand those foundations from other Armenian people he's met, and go to his grandparents' homeland was a moving experience for Badrigian.

During his research, Badrigian said he read many articles, documents, and stories that focused on the genocide's devastation.

"I've read everything I could lay my hands on. But it was all the same. It was sad, massacre after massacre. It was all nonfiction," he said.

He wanted to write a story that respected the sorrow of that moment in history but also showcased the courage and bravery of those who escaped.

"I use the women [in Armenia's Fingerprint] in a symbolic way as a form of women empowerment. The Turks worked so hard at destroying any evidence of the Armenians' nobility, heroism, bravery, and courage. They destroyed all of that. You know, people say, 'Well, the Armenians must have been cowards, why didn't they fight back?' Well, they did fight back, and that's why I wrote this. In here, I documented the real freedom fighters and I tell that story," Badrigian said.

That acknowledgement felt much more significant to Badrigian on April 24, when President Joe Biden formally recognized the systematic killing and deportation of more than a million Armenians by Ottoman Empire forces as genocide—Armenian Remembrance Day. Biden's administration is the first to use the term "genocide" to describe what happened to the Armenian people in 1915.

"Of those who survived, most were forced to find new homes and new lives around the world, including the United States. With strength and resilience, the Armenian people survived and rebuilt their community," Biden said in an April 24 statement. "Over the decades Armenian immigrants have enriched the United States in countless ways, but they have never forgotten the tragic history that brought so many of their ancestors to our shores. We honor their story. We see that pain. We affirm the history. We do this not to cast blame but to ensure that what happened is never repeated."

Badrigian said the president's recognition brought him to tears.

"For those of us that are here, be thankful for what you have because somebody paid a dear price and suffered greatly so you wouldn't have to," Badrigian said.

Even though his grandparents lost everything, they didn't falter in who they were, he said. Their strength and religious faith helped him understand who he was when he left Massachusetts at 19 years old to see the redwoods in Big Sur.

That strength and faith stayed with Badrigian as he stopped in Cayucos on the way to Big Sur and on the way back, when he decided to make a home on the Central Coast.

A resurgence in his faith and the strength of his grandparents is what he feels got him through his pancreatic cancer. Badrigian said he's now part of the 3 percent of adults who survive the cancer more than five years—in 2017 that number increased to 7 percent.

"Hey you take a risk, leave your home, and come out here, and everything will fall into place for you. And it did. So if there's a higher power, guardian angel, or whatever, it's there. I've always been so lucky," Badrigian said. Δ