A madness most discreet

Cindy Totten’s ethereal speaking voice turns even dreamier when she talks about Shakespeare.

“We just want to tell these wonderful stories,” the director breathes, “whether it’s something about love, or really fun and wacky, with mistaken identities and twins, with a little bit of Elvis thrown in, and gangsters.” 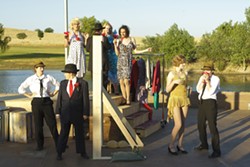 An annual celebration of the English language’s greatest ambassador, the Central Coast Shakespeare Festival leaves the words intact—but the rest is fair game. The festival, which kicks off July 14 at Paso Robles’ River Oaks Amphitheater and runs through Aug. 13, presents two plays in repertory: Shakespeare’s pastoral comedy As You Like It, which Totten and the festival’s artistic director, Zoe Saba, deliver in unadulterated Elizabethan splendor, and Shakespeare’s early stroke of genius The Comedy of Errors, transplanted by director Teresa Thuman from Ephesus to the seedy territory of backstage Las Vegas, circa 1960.

Under Totten and Saba, As You Like It is straight Shakespeare. The comedy is just right for the outdoor amphitheater, beginning in the confines of Duke Frederick’s court, but soon expanding into the wilderness when its protagonists are banished to the Forest of Arden.

“You can see the sun set and the moon rise and the stars come out as they’re talking about the beauty of nature,” says Totten, her eyes going soft. “And falling in love.”

In the well-loved comedy, Duke Frederick, played by Elaine Fournier, has usurped the duchy—or duke’s territory—of his older brother, Duke Senior, banishing him from the court, but allowing his daughter Rosalind to stay. Rosalind, portrayed by Jessica Boles, and Frederick’s own daughter Celia (a delightful Christina Fountain) are inseparable. However, when Rosalind and Orlando (Kevin Patrick Lohmann) fall in love, Frederick banishes Rosalind. Orlando, you see, is from the wrong family. Rosalind, dressed as a young man, makes for the forest, with Celia, dressed like a beggar woman, at her side.

Orlando, too, faced with persecution by his older brother, sets off on his own path toward the forest in search of the old Duke, and here the story unfolds.

Every year, the festival boasts several fine actors who perform impressively disparate roles in both plays. Festival regular Janet Stipicevich is fresh and captivating as The Comedy of Errors’ Antipholus of Syracuse and As You Like It’s Jacques—the melancholy philosopher charged with delivering the weighty “All the world’s a stage” speech.

Jessica Boles is dynamic as both the witty, adventurous young woman Rosalind and the nervous, bumbling slave, Dromio of Ephesus.

In Thuman’s reading of Comedy, the gender roles have been totally flipped, so the women in the cast make threats and get into rumbles, while the men either flounce around worriedly or intimidate in thigh-high stiletto boots, brandishing a whip. It’s interesting.

“I was originally trying to figure out a way where we could play around with some cross-gender casting,” Thuman explains, “because some of the women’s roles feel a little stuck in the ’50s … There was something about those lines being said by men that seemed to resonate with me.”

Comedy is an extremely convoluted story of a Syracusian merchant, Egeon (played by David Hance), who faces execution for violating a law prohibiting Syracusian merchants in Ephesus. He can get out of it only by paying a large fine, which he is able to postpone by telling the duke the sad tale of his twin sons separated long ago in a tempest at sea. One stayed with him, the two of them strapped to the ship’s mast, while the other son was rescued with his wife, neither of which he saw again. When his now-grown son set off to find his other long-lost son and didn’t return, Egeon himself set off himself to find him.

It doesn’t help the confusing premise to add that Egeon had also purchased two identical twins as slaves to his sons. Or that the slave twins are both called Dromio and their masters both called Antipholus.

The carnivalesque nature of a Las Vegas setting lends itself well to a play rich in disguise and mistaken identity. At a recent rehearsal, Thuman admitted some aspects of the adaptation still felt rather contrived, though the adaptation as a whole seemed to be working surprisingly well.

Just after Egeon’s arrival, the sought-after other brother and slave turn up in Ephesus. Thus begins a mess of two pairs of identical twins loose in the same city, causing misunderstandings with every turn and running afoul of local law enforcement—a.k.a. gangsters, in Thuman’s Vegas version.

Of course, you don’t need to understand every plot nuance to appreciate the delicious language and absurdity of Shakespeare. In fact, in the case of The Comedy of Errors, it seems almost like you’re not even supposed to keep up. But to their credit, the festival’s directors strive to make clear the intention behind every utterance, every action onstage. At a rehearsal, directors will even stop an actor mid-scene to ask him or her to translate a particularly antiquated phrase into the parlance of today. And perhaps for the sake of keeping it real, we are spared any attempt at affected accents, excepting the natural lilt that seems to creep up on American actors delivering Elizabethan prose.

“There are certain things we’ve done to sort of tweak stuff,” Thuman explains—such as making an abbey into a kitschy Vegas wedding chapel. “We’ve felt a freedom to play with certain aspects of it to fit our world, but there are times it doesn’t seem foreign at all.”