Chapter three: “The first time Bill made wine, he was buck naked. Clothing wasn’t optional at the communal grape stompings on Mountain Drive above Santa Barbara …”

Can I just say, it’s been a few years since I’ve lain in bed and highlighted full sentences in a book, cap in my mouth, pages dog-eared to hell.

“… You could wear a hat, but that was about it, Bill said. So there he found himself, in a five-foot diameter vat, literally hanging out with other naked women and men, their arms locked as they stomped the fruit and whooped it up. The year was 1968.”

It wasn’t just my desire to dutifully explain The Mad Crush: A Memoir of Mythic Vines and Improbable Winemaking that led me to relapse into over-enthusiastic college-style reading. It wasn’t the references to beatnik nudity, either—although it did leave a colorful impression on my imagination.

Like all great memoirs, it just felt good to step into the story and let the wine splatter where it may. To visibly mark the quiet, yet revelatory moments that ignited both my curiosity and my comradery with author Sean Christopher Weir.

So, I filled the margins. And laughed out loud. And pondered. I put the book down then picked it right back up again.

A sub-subtitle to this memoir might read: “Forget everything you know about Central Coast winemaking. Then, get off your butt and live your life.” Readers will find a clear, unvarnished, and relatable view of the winemaking process as well as the messy truths that spill from the heart.

Our introspective, aimless hero (20-something Weir) forges a blazing path through the chaparral-covered nooks and crannies of Arroyo Grande’s mysterious Saucelito Canyon, sweeps into not-yet-pretentious 1970s Sonoma (where the author grew up), and plumbs the fascinating, hot-blooded world of 1960s Santa Barbara art/winemaking counterculture.

Weir himself did not live through those latter groovy days, but his self-made, delightfully gruff mentor—Bill Greenough, owner and winemaker of Saucelito Canyon Winery—sure did.

And, he’s got the photos to prove it. Just turn to the middle of the book.

“At the time, I didn’t realize it, but Bill would become something of a father figure to me,” Weir said. “He was a quiet guy, but he would occasionally drop these stories that you wouldn’t believe.”

Just out of Cal Poly with a journalism degree, Weir knew little about winemaking—and less about Greenough—when he was called to work the ’95 crush at the isolated Arroyo Grande-area winery.

Two paths were set before him: Will grapes into wine or stagnate.

“Everything I owned was stuffed into my Mitsubishi pickup,” Weir said (his cat rode shotgun). “A lot of weird and wonderful things happened during that harvest, and it was a special time for me. I took notes, and always thought in the back of my mind, ‘One day, I’d like to tell this story.”

As Weir worked the crush and subsequent harvest—racking barrels in quiet seclusion, attempting—poorly—to pop grape-hungry starlings with a shotgun, and getting to know the motley crew of harvest workers (which included a longhaired drummer, slacker ladykiller, and a razor-sharp engineer)—bits of pieces of Greenough’s story came out. These details fluttered about in the cool, marine breeze, piquing Weir’s journalistic spirit. 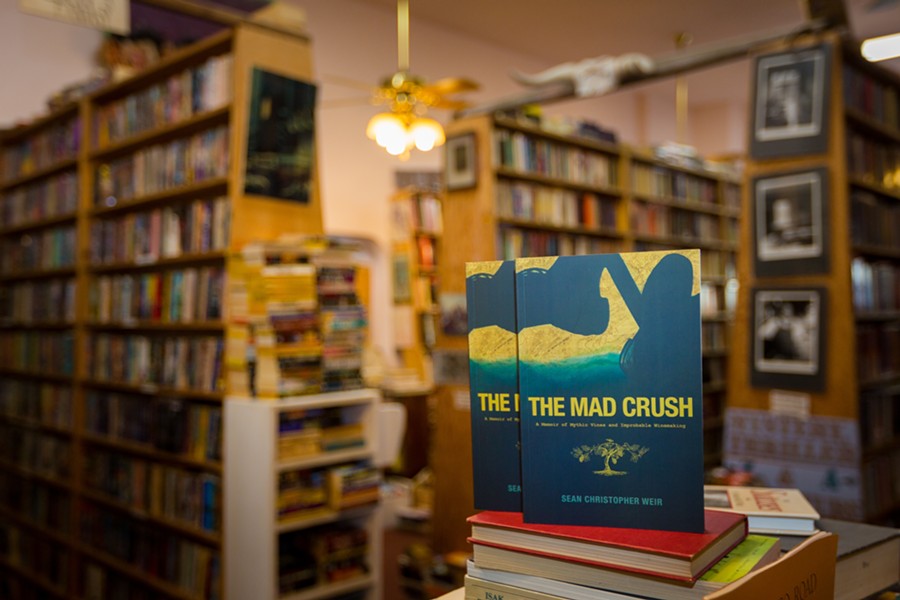 “There was the story of this Englishman coming out into the wild lands of Arroyo Grande by horse and carriage in 1880, which is hard to get to even now,” Weir said. “With horse and plow, he planted the vines at Rancho Saucelito. I thought, ‘truth really is stranger than fiction.’”

After years of chewing on the thought of writing a book about his coming-of-age experience at the winery, Weir sat down to seriously research a bundle of historic accounts. Over many cups of coffee, he also reconnected with and interviewed his old mentor.

What Weir found was rich, strange, and undeniably interlaced into his own life story. Personal notes and historic facts began to merge in strange harmony. Weir likens his style to a memoir told in “campfire fashion.”

I find this description to be dead on. Full of bygone details that crackle to life, the story is thoughtfully interwoven with poignant personal truths.

“My story of the 1995 crush would have maybe made a fun short story, but I don’t believe it warranted a full book,” Weir said. “When I learned the backstory, in the 100 years that led us all there to [Saucelito Canyon], I saw the serendipity. That’s when I realized it was really a story within a story.”

About 100 years ago, English homesteader Henry Ditmas did plant approximately 3 acres of zinfandel in the middle of nowhere, 40 miles south of Paso Robles and 15 miles north of the Santa Barbara County line.

However, nothing could be as impressive as what Greenough himself did after purchasing the land in 1974.

“He saw these 100-year-old vines and restored them with nothing more than a pick and shovel,” Weir said. “This story truly made a lasting impression on me.”

The author bleakly described what Greenough saw upon his first arrival to the property: “An expanse of scrub and poison oak riddled with the overgrown knobs of what looked like dead vines.”

“Why bother to restore these vines? Why expand them to 10 acres?”

What drives self-determination? What compels us to push forward—to try harder, even when it’s 100 degrees and all you have is a handful of blisters?

“This is not just a story about wine and winemaking; it is a story of endurance and entrepreneurship,” Weir said. “These people took chances. From Ditmas settling the land in 1880, I like to think of all the dominos that have fallen, and have continued to fall, because of that single act.”

Weir is, arguably, the next domino in that lineup. Through telling the story of “mythic vines and improbable winemaking,” he is passing on a frenetic energy that will never die, only change shape. Greenough’s kids are now making wine at Saucelito Canyon, too.

“If only Henry Ditmas could know all of the things that followed after him,” Weir said. “This book is in part a testament to that American dream of sticking your neck out; of creating something.”

Five years ago, Weir attended a retrospective anniversary tasting in the old canyon celebrating Greenough’s 35th year as owner of Saucelito Canyon. There, Weir came face-to-face with a dear friend: That hard-won, defiant 1995 Zinfandel, which had been stored in Greenough’s hillside wine cave.

“I hadn’t tasted that wine in 12 years,” Weir said.” “I was interested to see if it was still alive—if it could still tell a story.”

Zinfandel isn’t known as the most age-worthy wine on the block. For all the author knew, his partial handiwork could taste like pure vinegar.

There was only one way to find out.

As Weir so deftly described the fateful moment in his novel:

“I watched intently as the wine tumbled into the glass, deep purple at its core, but bronzed by age at the ridges.”

“It took me by surprise, and I had a visceral, ‘wow.’ All the memories started coming back to this time in my life,” Weir said. “It wasn’t the freshest wine, but it was still hanging in there. That’s when my wheels started turning. I thought, ‘Maybe I should dust off those notes.’”

After all, as Weir likes to say, “Left to their own devices, grapes will just rot. But when turned into wine, they tell a story.”