Everything was running on schedule when The Spaces Between stepped onto the flatbed truck-turned-stage at SLO Tracks in February. About 120 people flocked to the 100-year-old barn for the venue’s second show. Some of them lounged on couches and chairs while others perched on wooden benches repurposed from old feeding troughs. Outside, friends swapped smokes and stories around a small fire pit. Beyond that, acres of Edna Valley vineyards stretched on toward distant mountains. Arroyo Grande local Travis T. Warren of Blind Melon fame was set to headline. The energy was palpable.

And then, a sheriff pulled up.

“I didn’t know what he was here for exactly,” says SLO Tracks founder Vincent Bernardy, who was himself poised to take the stage that night. From where the longtime booker stood, the event constituted nothing more than a party taking place on a privately owned ranch off a dirt road in rural Edna Valley.

Lucky for Bernardy and the crowd of local artists and friends, a delightfully mundane exchange transpired.

“The sheriff was actually showing another person how to get over here for the show,” Bernardy says. “He was trying to help someone find us.”

The 48-year-old flashes a wild smile when he explains this part of the story, and, for a brief moment, he looks exactly like a joyful child with stubble. We’re sitting around the SLO Tracks fire pit—long extinguished—on a hot March afternoon. About a dozen chickens roam the 20-acre property surrounding the renovated SLO Tracks barn, which Bernardy spent about six months transforming into the working venue, complete with lights, seating, DG floor, lounge areas, and the 21-by-8-foot 1971 GMC truck-turned stage. If you ever happen to find yourself at SLO Tracks, ask Bernardy about this sturdy piece of American-made machinery: It once hauled gear for bands like Aerosmith and Van Halen.

To our right, a silver bullet Airstream trailer reflects the sun. Another ancient barn, used as a tack room by property owner and local artist Suzie Bliss, is situated to our left.

“It was actually a really good, smooth show,” Bernardy says with a raspy chuckle. “That’s pretty much exactly what you want to happen. A lot of that positivity has to do with the people who come out here.”

When I called The Spaces Between’s Andrew Rubin, who celebrated his band’s CD release during last month’s show, he echoed the need for an accessible, all-ages venue. The guitarist sounded like an appreciative peer, not a 19-year-old, not yet old enough to play downtown bars.

He created a YouTube video to help guide folks out to the venue near SLO Regional Airport. He added, “It’s just a really free feeling at SLO Tracks. You know people are there to appreciate the music, and it’s incredible for artists. There’s no pressure. The atmosphere Vince has created has made it very open for us to just do our thing.”

The friendly sheriff in our story is also significant from Rubin’s point of view. The musician was eager to say how refreshing it was that the show was bolstered—not squashed—by local authorities.

It certainly represented a poetic turn of events for Bernardy, who, just last summer, experienced a less-than-happy visit from the fuzz. After toiling for two and a half years building up weekly music events at the Sanitarium on Osos Street (also owned by Bliss), that dream was suddenly dashed.

At the time, Bernardy doubled as innkeeper at the quaint Victorian bed and breakfast, made cooler by the fact that it was actually used as a sanitarium circa 1850. Those who attended the venue’s artful, sit-down gatherings can attest to its singularity—especially when set against the rowdy, pee-scented barstools at more than a few downtown watering holes.

“For more than two years, all the neighbors around The Sanitarium were really cool,” Bernardy said. “Then, I think someone moved into the neighborhood who didn’t like the noise. They would call the police … and the police told me that if one neighbor complains, that’s it.”

It was 8:45 p.m. when Bernardy was slammed with his first $350 fine late last summer, and he was told that the fees would double on each subsequent visit. Local band The Bold (now defunct) was playing a Black Sabbath cover to a crowd of regulars who had come to depend on the showcase’s eclectic mix of talent. Each week, a $5 cover guaranteed attendees a slice of pizza topped with fresh basil, a cold beverage, and confidence that the acts—which ranged from nationally known to locally known to virtually unknown—would be compensated.

Bernardy said there was no way to avoid or pay the influx of looming fees. If you ask him now, he puts on a good face about it all, but hints of heartache still surface. The truth is, Bernardy worked a full-time job keeping music flowing through that space, and he didn’t stand to make money doing it.

“It felt so good giving back through the Sanitarium,” he says as we cool off in the shady SLO Tracks barn. Vivid pieces of art (many created by Bernardy and Bliss) hang on the walls. “It was a pain in the ass sometimes, but there were also so many experiences that were magically incredible. I would sometimes cry, or look over at Suzie, and she’d just be in awe. I’d get calls from out of the blue, acts coming through asking if they could play. No matter what, I would still say, ‘OK, I’ll get you in here.’”

SLO Tracks reflects Bernardy’s move into a new home for booking as well as a departure from his old routine. As a booker, he’s learned to better preserve his own sanity, aiming to throw a few carefully curated, thoughtful shows per year instead of a attempting to tackle what the Sanitarium had surely become: a herculean cat-wrangling effort that could never truly flourish under San Luis Obispo city sound ordinances.

Berndardy, who performs and records under his own name as well as the moniker St. Vincent Folk, is also dedicating more focus to his own art, including a rock-oriented album in the works. His original lyrics are sincere and windswept, and his music (on many recordings he plays every instrument) is both melodious and jangly, always with an unshakable groove.

His 2013 release Moonlight Dream Bed—featuring cameos by local singers Jade Jackson and Emily Wrynm as well as British celebrity crooner, Rumer—won 2013 Album of the Year from the New Times Music Awards, with songs “Rodeo Clown” and “Sweet It Is” taking first and second place in the songwriting category, respectively. Later this month, Bernardy will travel to Los Angeles to work on Rumer’s forthcoming release.

In other words, Bernardy is focusing on what inspired him about the music business to begin with. Before he ever started booking shows in his hometown of Minneapolis in the ’80s and ’90s—before he rubbed elbows with Dave Pirner of Soul Asylum or Bob Stinson of The Replacements—he was hanging around garages and alleyways, wanting to be part of the music around him. 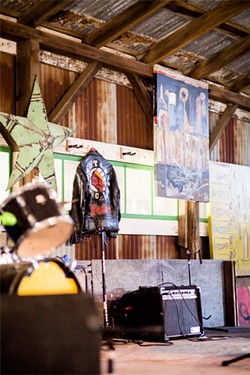 “I feel thankful and humble for the recognition, I really do,” Bernardy says of his growing local following. “I played a show at SLO Tracks earlier this year, and there were actually people in the audience singing the words to my songs. That feels pretty good. I am always hoping that I am making a positive impact. I also want people to know they don’t need an award to validate what they do.”

In so many ways, that DIY philosophy shines through Bernardy’s work, from the Sanitarium’s small living room to the 50-by-42-foot SLO Tracks barn. It’s an inclusive message that says: “You, too, can belong on stage.”

“Like Willie Nelson said, ‘If you are good, you’ll rise to the top,’ no matter what crud you go through, and I believe that, to a point,” Bernardy says. “I try hard. I try to put 150 percent into what I do, and I know that these are all just little pieces of the bigger picture.”

SLO Tracks aims to be one piece of the puzzle that is SLO’s somewhat malnourished all-ages music scene. Someone’s got to keep the torch lit, and Bernardy is willing to plant the seed, however fragile. A show is tentatively scheduled for this summer, and readers can check out the venue’s Facebook page for the full scoop.

For Bernardy, it’s all about building an artistic home, both for his own music and his friends. That home is built from barn wood, hard work, and faith.

“I am doing what I’m here on this Earth to do,” he says. “Everything I do is planting seeds, and I have faith that they’re continually growing.”

Contributor Hayley Thomas can be contacted via Managing Editor Ashley Schwellenbach at aschwellenbach@newtimesslo.com.