While San Luis Obispo County waits to conduct its delayed Point-In-Time (PIT) Count of sheltered and unsheltered residents experiencing homelessness, a local volunteer conducted his own survey to identify the needs of the unhoused. 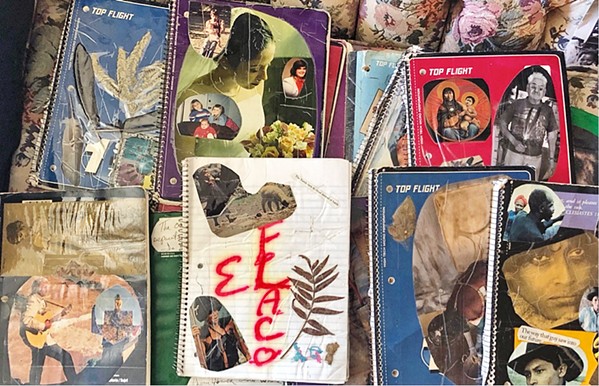 A volunteer at Transitions-Mental Health Association (TMHA), Arcuri worked as a psychiatrist until he retired. Last year he documented the personal stories of a handful of SLO County's homeless residents to better understand their needs in a project called "In our own words" as part of a master's degree in narrative therapy and community work from the University of Melbourne. He said his narrative data set de-centers the person doing the work and encourages the voices of those who are sharing their stories.

"We tend to get stuck in the problems, and we don't tend to focus on what people's hopes and dreams are, and how we can help them re-engage with those in a way that gives their life meaning going forward," Arcuri said. "That's why I started to study this and decided to work with a group of people who are so marginalized in our consciousness and in our media. There's hardly anyone who's more stigmatized than people living on the street right now."

Arcuri interviewed 26 people who were homeless at the time or had once experienced it. He met them through TMHA, the Saturday mobile showers organized by Hope's Village at the United Church of Christ, and by approaching people seeking shelter at a campground near Prado Road.

The interviews detailed reasons why many of them became homeless, ranging from child abuse to experiencing mental health challenges as successful adults. It also included accounts of the barriers they faced while trying to get re-housed.

"Agencies had power over us; we were not believed. We were not treated with respect by agency workers. During COVID you can't just walk into an agency if you're nearby. We couldn't stand telling our story over and over again and filling out form after form at every different agency," one interviewee stated.

"Many of us were unable to keep in touch with agencies; unable to charge cellphones, no mailing addresses, police kept busting up our camps, no stable location for us to be found at. One of us lost Social Security disability benefits," another said.

Arcuri said he wants programs like safe parking sites to include cellphone charging stations. He told New Times he was unable to follow up with some of the study participants who were still unhoused because there was no feasible way to contact them even after returning to the location where they initially met.

One of Arcuri's responders is 72-year-old Jake Mcgee. Mcgee was homeless for the majority of his life, until TMHA helped him and his late wife find housing seven years ago. Now, he lives in an apartment in Atascadero and has weekly errand appointments with a social worker. But housing wasn't always what Mcgee wanted.

"There are people that don't want to be inside. When I was younger, the idea of being in an apartment just made me almost physically ill. I'm grateful now I have an apartment," Mcgee said. "Now, I've been outside enough. ... I've been camping almost all my life."

Mcgee added that most times, homelessness is about survival—a comment that appeared frequently in Arcuri's survey. Arcuri said that for some it's a conscious choice to live outside and save money from low-paying jobs that would have otherwise gone to paying high rent in an area like SLO County, which has few low-rent housing options. He hopes that safe parking programs, which agencies such as Community Action Partnership of SLO treat as temporary solutions, can permanently host some homeless people.

"The parking sites are supposed to be temporary, that's very laudable. But where are the houses gonna come from that are affordable? To get a Section 8 voucher, you have to have some form of income that you pay a small portion of each month for rent. But people get Section 8 vouchers and stand in line for years, waiting for a living site to be available because they just don't exist in the numbers needed."

Orphaned at 8 years old, Mcgee later voluntarily backed out from fighting in the Vietnam War and moved around from Texas to California while primarily earning a living as a musician, a passion he still pursues. Though he said SLO County treats its homeless comparatively better than some other places in the country, Mcgee thinks more proactive effort is needed.

"People should be accountable for others. Talk is cheap. It's criminal that people aren't given a chance. You don't give people a chance to speak, ... but they assume because it's convenient," Mcgee said. "The powers that be in this county are nowhere near addressing this issue. They pat themselves on the back for any little thing."

On Feb. 15, a homeless woman died in a fire that broke out in her motorhome at the Kansas Avenue safe parking site. And at least two homeless individuals were found dead last year in Mitchell Park, just before the city of San Luis Obispo instituted a camping ban.

SLO is currently fighting a lawsuit filed by five homeless people after a federal judge rejected a motion to dismiss it. The case alleges that the city grossly mistreats the unhoused community. Mcgee said that most people are afraid to hear the truth, and Arcuri expressed his support of the judge's order.

"It's a supreme cruelty," Arcuri said. "We treat homeless people worse than animals in not providing minimal amenities."

He said that the main goal of the narrative study was to highlight the top desire of the homeless population that county officials often overlook: "Nothing should be said about us without us."

"The second goal is that people go behind stereotypes about who is on the street ... and start seeing the humanity in them," Arcuri said. "If you have run small businesses, own cars, raise children, have worked 30 years in careers, because of a number of misfortunes wound up homeless ... that could happen to any of us. It's not like these people are from Mars or are untouchables." Δ