Find the Central Coast Restaurant Coalition, SLO, on Instagram and Facebook @ccrc.slo. Learn more about the coalition, apply to become a member, or donate by visiting ccrc-slo.com.

When Big Sky Café's Greg Holt saw what was happening to his restaurant industry colleagues during the COVID-19 pandemic, he knew he had to do something to help. But he wasn't sure exactly how.

Luckily, he did know someone who could assist: United Way of San Luis Obispo County Director of Equity and Resource Development Dr. Leola Dublin Macmillan, who also happens to be a Big Sky regular.

"Like most people, especially most professional women, I wear about 26 hats, but one of them involves building and sustaining really active relationships in the community to make sure we meet as many unmet needs as possible," she said. "Greg came to me with an ask and an idea, and I said, 'Yes, here's how we're going to make it happen.'" 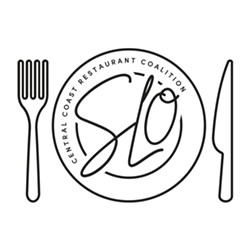 The ask and idea were simple enough: raising money for restaurants in need so they could pay their employees, their bills, and rent. Figuring out how exactly to do it was a little more complicated.

Holt and Macmillan gathered together with other local restaurateurs so they could talk about what the industry's needs were, what individual restaurant needs were, and how they could collectively establish an effective way to meet those needs. After many conversations, they formed the Central Coast Restaurant Coalition, SLO, which launched in February with Holt, Macmillan, Black Sheep Bar & Grill's Myriam Olaizola, La Esquina/Ciopinot's Rob Horton, Novo's Samantha Welch, and Catt Hasbrook serving on the board of directors. The coalition's goal is to raise and distribute financial support directly to local restaurants that need it.

"We've brought this together to keep our restaurant community vibrant and alive. There are so many now who've already given up," Holt said. "Our industry, our staffs, these are not the highest paid people in the world. And when I had to lose half of my staff, that hurt, and I want to take care of them. ... Big Sky Café is very fortunate. We've always had a lot of support, and throughout all of this, there's never been any doubt that we weren't going to survive. ... But that's not the case for everybody."

Several downtown restaurants have closed since the onset of the pandemic, including one of the establishments that helped get the coalition going, Captain Bill's Subs, which shut its doors in February.

Making it through the ups and downs of the pandemic has definitely been a struggle, Holt said. He let go of front-of-the-house and back-of-the-house staff due to COVID-19 closures. Big Sky's finances backed up, he got behind on the rent and the bills, just like his colleagues in the industry. Without people coming into local restaurants, which had to shift to to-go food due to pandemic regulations, everyone's bottom line is hurting. 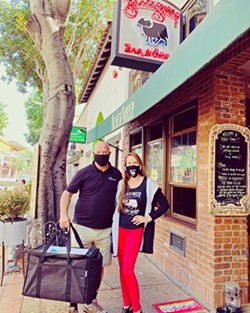 Macmillan said that the restaurant community is truly close, especially in downtown SLO. As someone who lives downtown, she visits the central establishments somewhat regularly. She knows who will be at the hostess stand when she walks into Novo or who to expect at Big Sky during the lunch hour. But COVID-19 changed that.

"If you are a part of the San Luis restaurant community, you can't be kind of a part of it. It's too intimate a group to be strangers and too close in proximity to be unfamiliar, right? And so, you understand, it's not numbers or statistics, it's people," Macmillan said. "If Greg has to cut 30 percent of his staff, that doesn't mean 30 percent of his staff. It means Pedro's out, Josh isn't going to be at the bar, and Vivian isn't going to be at the hostess stand."

"It's not impersonal," she added.

The coalition, Holt said, is all about coming together to survive this time.

Although the group of restaurateurs had a lot of decisions to make on how to proceed, Holt said the biggest hurdle was the decision to collaborate with the United Way rather than forming a separate nonprofit entity, which would have required a significant investment of time and other resources to go through the application process.

Macmillan said they came up with a couple of ways to raise funds, through grants and community donations, using the United Way as the umbrella nonprofit. The group also decided on an application process based on need and demographic information, because sometimes grant funding is geared toward specific things, such as underrepresented or vulnerable populations.

"There's a lot of underrepresented people who work in my industry, that's for sure," Holt said.

For now, the coalition is trying to come up with a blueprint that works for SLO and the area immediately surrounding the city—hopefully a model that works and can be replicated in other places in the county. Focusing on the immediate impacts of COVID-19 for now, the goal is to establish something that can support the community over the long run and respond to whatever unforeseen natural or economic hardships come in the future.

Through the processes that United Way already has in place, the coalition was able to develop a ranked system of needs with keeping employees, paying employees, and supporting employees at the top of the list. Then, of course, keeping the lights on, keeping the doors open, paying back the bills that need to be paid back in a timely manner, and so on.

"At the end of the day, we're not going to turn anyone away," Macmillan said. 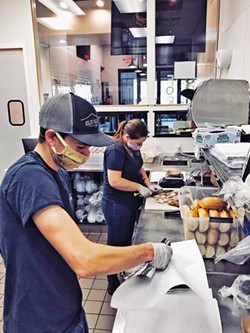 Coalition member Hasbrook said that the coalition is currently accepting donations and applications for new members in need of financial assistance because of the pandemic. The coalition is also finalizing a marketing campaign to get the word out and setting up more of an online presence.

It would be great if the coalition could help every restaurant that's suffered get back on their feet and ensure that everyone who may have lost their job due to the pandemic can get that job back, Holt said.

"We are the service sector ... . The people that give services to other people," Holt said. "We're the first ones to go and the last ones to come back." Δ

Correction: In an earlier version of this story, Dr. Leola Macmillan's name was spelled incorrectly. New Times regrets the error.

Editor Camillia Lanham is helping get the word out. Send food news to clanham@newtimesslo.com.