So the election is over for county supervisor�

It’s been about 36 hours since elections officials unofficially closed the books on the June 5 California primary, and Julie Rodewald is in the war room stamping stacks of ballots with the words “Invalid Write-In” in red ink. 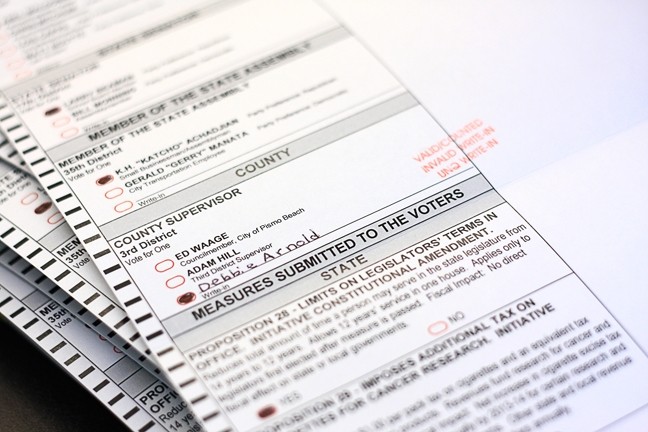 On the other side of the room, staffers are combing through stacks of ballots—50 at a time—and searching for write-in candidates. Bubble in a write-in candidate on a ballot and it will stop the scanning machines. So election workers pull out these oddlings ahead of time to avoid gumming up the process.

Rodewald, the San Luis Obispo county clerk-recorder, is going through all the write-ins and searching for any that match a list of valid candidates she has in front of her. After processing 2,348 ballots, she’s found only one valid write-in. Most of the ballots she’s looking through have Mitt Romney as a write-in under Barack Obama, or vice versa.

“These people don’t realize that they’re registered as a Democrat,” Rodewald says while she stamps ballot after ballot as invalid.

A lot of people just forgot their party registration, Rodewald believes. Actually, one voter simply scratched out the word “Republican” at the top of a ballot and wrote in “Democrat.”

One person voted Donald Trump for president, another wanted to see Noam Chomsky, and a few others would rather have had the reanimated corpses of Teddy Roosevelt and Dwight Eisenhower re-occupy the Oval Office. One person, when presented with 24 candidates vying for California’s representative in the U.S. Senate, simply wrote in “Anyone but Diane Feinstein,” Rodewald said, which is odd because there were 23 other people who met that criteria. So that vote was tossed out.

Other popular write-ins include Mickey Mouse and Donald Duck, Rodewald said. While observing Rodewald filter through ballots, I saw write-ins for “No Obama,” Colin Powell, and Jesus Christ.

A few people even snubbed local candidates for county supervisor. Supervisor Frank Mecham, for example, ran unopposed for his second term on the District 1 seat, but that didn’t stop some from writing in Debbie Arnold, who was running in the nearby District 5 race. She won that election, by the way.

So Jesus and Mickey won’t be taking office, but Arnold will. When Arnold eventually plops into her seat in January, it marks the first significant change on the Board of Supervisors since Adam Hill ousted Jerry Lenthall in 2008, giving the board a new Democratic-ish, environmental-leaning stronghold. Hill joined Bruce Gibson and Jim Patterson to form what, at the time, was considered a new 3-2 majority that lay somewhere left of center.

And in those remaining lame-duck months, it was a veritable developer
free-for-all, which peaked in the last-minute approval of the Santa Margarita Ranch agricultural cluster development.

Will Arnold replacing Patterson mean a reversal of the reversal that occurred in 2008? It depends on who you ask. Jerry Bunin is the government affairs director for the Homebuilders Association of the Central Coast, and he’s not expecting any drastic changes for himself or the people his group represents.

“I think it’ll be less tough to get a project through, and I think it will be a little bit less restrictive in terms of rural development,” Bunin said.

“We once again have the supervisors in the North County who are philosophically aligned,” he said. “I’m just not sure that there’s anything really looming on the horizon that’s going to cause someone’s effigy to get burned.”

Here are people who could make for an environmentalist’s effigy, if it were to be burned: Arnold, Mecham, and Supervisor Paul Teixeira, who’s so far remained relatively quiet, but nonetheless has leaned toward a property rights and pro-development stance.

With the economy still hanging just on the edge of the crapper—the latest county budget has a $2 million deficit, which is significantly better than the $30 million fiscal hole just three years ago—there still aren’t any monolithic projects on the horizon. Bunin said he doesn’t expect major developments to start creeping back onto the county’s radar until about 2014.

But ask Mike Brown—government affairs director of Coalition of Labor Agriculture & Business of San Luis Obispo County and the grumpy-face of local property-rights defenders—what he expects to see from the new board composition, and he’ll probably tell you, “less government regulation.”

“The strategy’s been backwards,” Brown said of such policies as the updated conservation and open space element to the county general plan, smart growth strategies to curb rural sprawl, the green building ordinance, and amended ag cluster subdivision regulations. “That’s what needs to be corrected. It’s not a question of paving over the county or destroying the beautiful, natural resources or agriculture.”

Bunin thinks the new board will be “less hostile” to the development community, and he too noted the tough regulatory environment in SLO County as something that could shift. (He noted that there are state regulations, mostly pertaining to greenhouse gasses, that can’t be undone at the local level.)

But these are the types of things Patterson said he fought to implement, and he’s worried they could be undone once he’s gone. Looking back on his career, he said he’s proud of the updated conservation and open space element, updating the county master water plan, updating the housing element, and pushing the so-called Energy Wise Plan. More so, he thinks his exodus will pave the way—as it were—for developers to push their projects in front of a more receptive board.

“I do expect development projects coming forward to get less scrutiny and probably there will be less resource and environmental protections going forward if the new majority does act the way they claim they will,” he said. “My biggest concern is that our efforts to implement smart growth and really move development toward existing communities … and minimize impacts to agriculture and open space and minimize sprawl; I’m concerned that will change.”

Hensley can see the changes coming, but, he said, “the price of democracy is diligence.”

“We’ve swung back to a more conservative vision and those of us who don’t share that vision are going to have to put in the effort,” he said.

Overall, here’s his advice to the new board: “My words to them are ‘don’t screw it up.’”