February 23, 2006
comment
Well, itâ€™s not a sewer, but itâ€™s a capital project that Los Ososans might agree on. San Luis Obispo County Parks has expressed interest in purchasing the 11-acre Tri-W site in Los Osos, which could turn the focal point of the sewer debate into a much needed, and desired, county park. â€œThis has nothing to do with the sewer,â€? says County Parks manager Pete Jenny. â€œIâ€™m just trying to look into a plan to build a park. Thereâ€™s no agenda other than to add park space.â€? 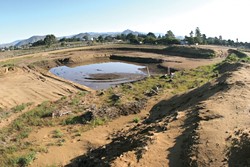 Â According to Jenny, County Parks has identified the need for a swimming pool and soccer fields in Los Osos, both of which could probably be accommodated on the site. But the deal is far from done. Jenny admits he doesnâ€™t know the cost of the land, doesnâ€™t know where the funding would come from, and hasnâ€™t approached the County Board of Supervisors about acquiring the land. So far, County Parks has notified the Los Osos CSD that they are interested in purchasing the property. Under state law, certain public agencies are given priority in the sale of surplus public lands.

Â â€œMy job is just looking for space,â€? says Jenny. â€œIf itâ€™s going to be sold off, we want to get in line.â€?