A night to remember

SLO County’s glitterazzi are out in force tonight, Saturday, July 16, at Cambria’s Vault Gallery, where the work of former SLO Town painter Mark Beck—now of Albuquerque, N.M.—is on display.

There’s painter Steven deLuque and Marshall’s Jewelers President Jeff McKeegan, who’ve been together for, like, EVER! They joke that their home is “the Mark Beck Museum” since they own so many of Mark’s paintings.

And there’s Phoenix Books owner Bruce Miller and his partner Michelle. Bruce was an early champion of Mark’s work and bought some of his paintings at a time when Mark really needed the support. Bruce has been studying under plein air artist Libby Tolley and says he’s become a “real painter.”

“Bruce,” I say, “I think of you every day … when I’m peeing. That little seascape you gave me is right over my toilet, but don’t worry. You’re in good company. There’s a little Mark Beck right above it.”

Then I see J.C. Whittaker, another of Vault Gallery owner Laylon’s excellent artists, whose self-portrait I just viewed on the other side of the gallery, which recently doubled in size and also includes a small outdoor sculpture gallery.

“Wow, I love your new self-portrait,” I gush.

“Thank you,” says J.C. in his utterly charming British accent. “Someone recently asked me who had painted the self-portrait of me.”

Then I spot Kathy Friend, who ran the I Madonnari Street Painting Festival for many years. She had cancer, but she kicked its ass!

“That’s your best wig yet,” I tell her, eyeing what is obviously now her real hair. “How do you feel?”

“I feel great,” she says, and I can tell she means it.

Then, as I’m chatting with Mark, I see Frank Zika, the terrific glass sculptor.

“Frank Zika?” asks Mark, extending his hand. “What a memory I have! At least long term.”

“Short term’s not so hot anymore, eh, Mark?” I ask before wandering into the backyard sculpture area, where world famous photographer Arthur Tress is holding court.

Arthur’s got a new show coming up in San Francisco at the nonprofit SF Camerawork gallery and a monograph to go with it. Seems after his sister passed away, he discovered a box of negatives he took back in 1964 at San Francisco’s Republican convention. He was just 23 at the time. 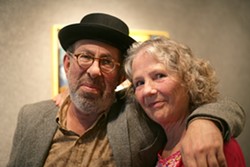 I wander back into the gallery, where I find musician and luthier Peter Yelda deep in conversation with former midwife and current peacenik Linda Seeley. So many friends coming out of the woodwork for Mark’s show! He clearly had an enduring effect on the people of SLO County, and his work is more interesting than ever. Rich with symbolism and atmosphere, the paintings are as beautiful as they are stirring.

This is definitely a night to remember, and since the ABC won’t let Laylon serve wine, I suspect I actually will remember it!