A night to remember

It’s Sunday, Feb. 24, and I’m all dressed up for an Oscar Party at the SLO Elks Lodge. Well, actually, I guess my neck is dressed up, because even though I’m wearing a black bowtie, I’ve got on a T-shirt, shorts, and flip-flops. Classy, right? 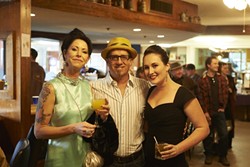 I think there are about 60 of us here, and some of us are actually well dressed—guys in tuxes, gals in evening dresses—and all the flat screens are tuned to ABC, where Kristin Chenoweth is interviewing the stars on the red carpet. Stars like Charlize Theron tower over her!

Soon we’re watching Oscars emcee Seth MacFarlane—creator of Family Guy, American Dad, and the film Ted, about a profane stuffed teddy bear come to life. His song and dance number “We Saw Your Boobs” is either a hilarious send-up of Hollywood’s exploitation of women or a sexist screed that points to men’s caveman-like mindset, depending on who you ask.

Known for his male-centric humor, he’s definitely getting off some zingers. When talking about Best Male Actor in a Leading Role winner Daniel Day-Lewis’s work becoming Abraham Lincoln, MacFarlane quips, “I would argue the actor who really got into Lincoln’s head was John Wilkes Booth.” Yikes! How’s that for bad taste?

He also mentions 9-year-old Best Actress in a Leading Role nominee Quvenzhané Wallis, deadpanning to other nominees, “So you got nominated for an Oscar—something a 9-year-old could do.” Then he jokes that Wallis was probably thinking, “I hope I don’t lose to that old lady Jennifer Lawrence,” the 22-year-old star of Silver Linings Playbook, who did win!

I also learned that there can be a tie at the Academy Awards. Skyfall and Zero Dark Thirty both won for Sound Editing. Apparently it’s not the first time something like that’s happened. Frederic March and Wallace Beery tied in 1932, and Barbra Streisand and Katharine Hepburn tied in 1969. And there are three others to boot!

New Times photographer Steve Miller is milling around taking photos of all the beautiful people, like scene makers Don Lampson and Peg Grady. (I think they’re following me around. They’re everywhere I go!) There’s also George Griffin and his lovely wife Liz Rhoads Cordoba, and they look smashing in their attire.

Shawn and Darci Hafley totally look Oscar ready. He’s got a tux on, and she’s in a chic gown. And there’s my Argentinean friend Monica Barricarte and her beau Carl. Stacy Willis and her boy-toy Wayne Gamble show up just in time to fill out a ballot, and my old friend Heidi Schroder-Kealey, who now lives in Colorado, is here too since she was out to visit her SLO County friends. 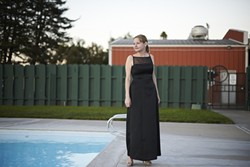 And I’ve got to give a shout out to bartenders Tiffany Cisneros and Matt Coyle and the whole Elks Lodge crew. So many people to thank. I know I’m forgetting some, but the music has started and that means my speech is over. Thank you, Oscar! You rule!