Iconic and timeless are two words that come to mind as I take my seat for the Civic Ballet San Luis Obispo’s performance of The Nutcracker on Dec. 10.

In spite of having spent many years as a tot rehearsing and dancing all winter long in The Nutcracker (my roles included gingersnap and mouse), a smile still comes to my face when I think of the holiday ballet. Never mind the year that my mom had to throw a birthday party for me during a dress rehearsal, forever causing her to refer to the production as “The Buttcracker”; it’s not Christmas until The Nutcracker comes to town. Many moons have passed since I took in the performance from the audience’s side, and my theater companion for the evening and I are thrilled that no one in the row ahead is obstructing our view of the stage at the Performing Arts Center at Cal Poly. 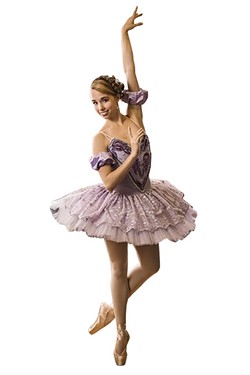 We’re in for an extra special treat as this rendition of the ballet is performed with live music of Tchaikovsky’s classic pieces, courtesy of OperaSLO.

The show opens with Godfather Drosselmeyer (Josh Ekblom) showing off his collection of lifelike mechanical dolls at a Christmas party, much to the delight of his goddaughter Clara (Sophie Hilton and Pheobe Johnson). Although we aren’t yet in magical Nutcracker land at this point in the show, the dances are still lively, and Civic Ballet has a few additions of its own—such as adorable tiny dancers dressed as lions, brought in on a train by that zany Drosselmeyer.

About 10 minutes into the show, someone with an unusually large head slides into the seat in front of me late, obstructing a good chunk of my view. This is unfortunate, but I persevere. To my left, the phones of high school or maybe college-aged girls light up with the latest snapchats. Loud giggles ensue. Before I can get too old-lady on them, my theater companion does it for me with a nice, “Can you please talk less?”

Meanwhile on stage, Drosselmeyer gives Clara a wonderful Nutcracker doll as a present. She goes to sleep and when she awakes she’s transported to another world, where a vicious band of mice are trying to steal her precious nutcracker doll! Soldier dolls arrive just in time to rescue Clara and the Rat King (Kasey Hayes) dies in the clutches of a super sized mousetrap. But wait! Where is Clara’s nutcracker doll? The victory over the mice reveals that her doll was secretly a handsome (human) Nutcracker Prince (Paulo Hernandez-Farella) all along.

Clara and her prince sail a turbulent sea back to the Nutcracker’s magical kingdom where his people perform pieces like Tea Dance (where we enjoy a cameo from artistic director Drew Silvaggio), Dance of the Gingersnaps with little girls running out from their large mother’s skirt, the Russian Dance with its classic music, Waltz of the Flowers, and of course, the Dance of the Sugar Plum Fairy, which is pulled off with technical precision and grace by Michelle Lemburg (who trained at the Royal School of Ballet in London.)

We sneak out before the final bow and as I walk back to my car, I feel a little bit merrier indeed.

Ryah Cooley is twirling and whirling away at rcooley@newtimesslo.com.