This October will mark 10 years of alcoholic engineering for Firestone Brewery. With five statewide gold medals this year, two '06 World Beer Cup titles, and a recent declaration as the "Best Beer in America" by Men's Health Journal, Firestone Walker has plenty to celebrate. 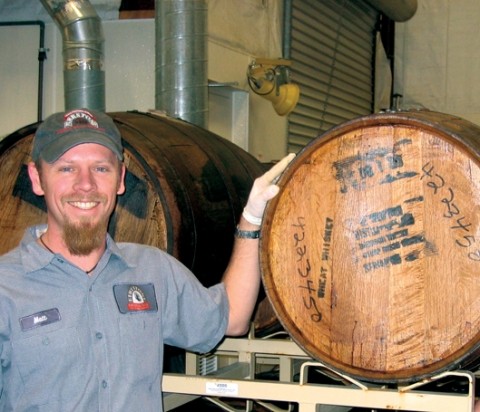 # The Firestone Walker experiment began in 1995, when brothers-in-law Adam Firestone and David Walker made a batch of home brew, using recycled oak chardonnay barrels. The method was far from standard, and the result was less than the pair had hoped for primarily because the Chardonnay had tainted the flavor. They tried again, using clean barrels and a classic British brewing technique. The Burton Union method, popularized in the mid-1800s, produces a complex fruity flavor and clean, clear ale. In May 1996, Firestone Walker's Double Barrel Ale was born, and it soon became a Central Coast classic.

The little brewery has come a long way from its borrowed space at the Firestone vineyard. Matt Brynildson was added to the team as the brewmaster in early 2000, and has been credited with much of the recent success. Walker describes him as a "rock star" in the brewing world. In 2001, the brewery moved to an expanded facility in Paso Robles. In 2002, the Double Barrel brought home its first gold medal at the World Beer Championships.

Ten years and a barrage of awards have made official what locals have always known: Firestone Walker makes great beer. To celebrate the big 1-0, Walker, Firestone, and Brynildson have been working away at a unique concoction that's actually 10 individual ales brewed over the past 10 months including an oatmeal Stout, a triple IPA, and, of course, the Double Barrel. The limited-edition beer is called 10, and it's not for the faint of heart. 10 will be a barley-wine-style ale, meaning full flavor and high alcohol content. 10 is scheduled for release on Oct. 10 at the Firestone Brewery's Taproom in Paso Robles. Only 500 cases of 22-ounce bottles will be sold in California. In SLO, you can find the limited brew at Spike's and a few more locations that have yet to be announced.

You can get a taste of 10 (and about nine other ales) at the upcoming Oaktoberfest, set for Oct. 14 at the River Oak Hot Springs in Paso Robles (see Cuisine on page 57 for more on that event).

Even with so much attention on the world stage and at home, the brains behind the brew are staying humble and keeping it local. If you ask Walker why the beer's so good, he'll tell you it's their commitment to traditional brewing techniques with a healthy dose of creativity. And, of course, the location. Fresh beer is better beer.

For more information about Firestone ales, call 238-2556 or visit www.firestonewalker.com.