The Atascadero Printery building is a historical landmark that’s wasting away after its previous owner neglected to pay eight years of taxes.

Community members intent on restoring the building formed the Atascadero Printery Foundation nonprofit earlier this year. The group recently met with San Luis Obispo County 5th District Supervisor Debbie Arnold to further discuss its plan and options for acquiring the building, and it received positive feedback. Karen McNamara, president of the foundation, said they hope to receive approval from the Board of Supervisors as a whole and move forward in the process of purchasing the building from the county. 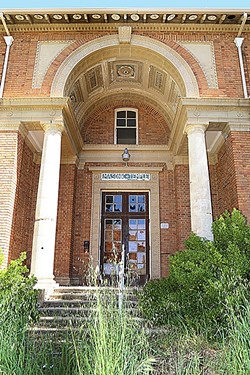 The foundation is in the first phase of reclaiming the building: raising money and awareness for the Printery. The building will cost the amount of back taxes owed on it, about $300,000. Aside from taking donations, the foundation created Friends of the Printery Campaign, in which interested individuals can support the cause.

Chuck Dunlap, the foundation’s vice president, said any donation big or small is appreciated; they’re not looking for a huge commitment because the current focus is securing the building.

“With a county this size, if we could just get a $20 or $50 commitment from a small percentage of the population we’d be in business,” Dunlap said.

The urgency to reclaim the building is felt as McNamara and Dunlap point out the Printery’s shattered windows and other marks of vandalism.

The second phase is still in the works as the foundation creates more campaigns and brainstorms annual fundraisers. McNamara said they’re looking into grants as revenue sources.

The Printery was built in 1912 and served many functions for the Atascadero community over the years. It was the first civic building in town, it housed the largest rotogravure printing press, it was a junior college, and then a sheriff’s office, and its last service was as a Masonic Lodge. The foundation wants to return the building to serving the community once again with opportunities such as youth art programs, senior citizens’ clubs, and more.

“Our goal is to see that door being opened and closed all day long, people in and out of here because the community needs more space,” McNamara said.

The foundation was formed after Nick Mattson, foundation treasurer, and McNamara’s late husband, Mike McNamara, were brought together by concern over the abandonment and decline of the building. Mattson said there was a lot of talk and brainstorming between the two men but taking action was halted when Mike suddenly passed. McNamara decided to continue her late husband’s efforts to bring life to the Printery.

To learn more information about the efforts of the foundation and to donate, visit atascaderoprintery.org and the Atascadero Printery Foundation’s Facebook Page.