A place to play

July 27, 2016
comment
For children with disabilities, many simple things that most of us take for granted, such as spending time at a playground with other children, are very challenging or even downright impossible. Atascadero-based group Parents for Joy wants to change this. 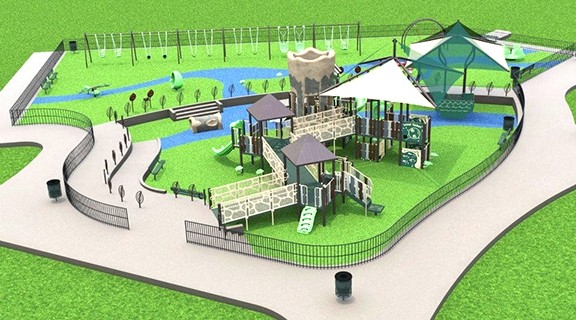 "We're all moms with special needs children," co-founder Jenell Allen said. "We got together originally as a support network, but then one day one of the moms was saying that she wished we had a place where we could bring our kids."

Since May 2013, Parents for Joy has worked to create a completely inclusive playground, designed so that it can be enjoyed by people with a variety of disabilities that otherwise would prevent them from using a playground. The concept is based on an enchanted forest theme, and even the "tree house" in the center of it will be wheelchair accessible.

"We made the walkway extra wide so children in wheelchairs won't feel squished," Allen said. "We want them to feel like they're a part of it, not that they're in the way."

One aspect of the playground that Allen said makes it unique is the fact that, despite being fully accessible, there are no wheelchair ramps. Instead, the entire space will be built into the ground, and the floor covering will be made of poured-in-place rubber rather than sand or wood chips.

"It doesn't look like a special-needs playground when you look at it," Allen said.

It's not only children in wheelchairs who benefit, either. Even conditions that most people don't think about have been taken into consideration. For example, the plans include a stainless steel slide, since the static electricity from traditional plastic slides can damage cochlear implants.

"We designed the whole thing to make sure it's inclusive for everybody," Allen said. "Even elderly people can enjoy it."

Right now, the only obstacle to making Parents for Joy's vision a reality is funding. They have already acquired their location and gotten all necessary permits approved by the city of Atascadero, but they haven't yet raised enough money to begin construction. In order to meet this challenge, Allen said that they have been holding several small fundraisers such as movie nights, and they've held larger annual fundraisers. This year's annual fundraiser is the Kid's Day and Family Expo at Atascadero Sunken Gardens, which will take place on Sept. 24 from 11 a.m. to 3 p.m.

Though Parents for Joy primarily considers the playground a service to the community, it is also a very personal mission for organization members. When Allen thinks about the project, she thinks about her daughter and her daughter's "medically fragile" classmates.

"I'm most excited for children that I see every day to go to the playground, to get out of their homes, to be with other children," she said. "When you have a child with special needs, you can't take them shopping, you can't take them out and about, so this is so important. It's the neatest."

To find out how you can support the project, email parentsforjoy@gmail.com.

Courtney's House, an affiliate of United Cerebral Palsy, now has a café. Courtney's House began in November 2015 with the goal of developing social and recreational programs for North SLO County adults with developmental disabilities and will use the recently opened Fig Café to teach program participants restaurant skills. The Fig Café is located at 311 6th St. in Templeton and is open from 7:30 a.m. to 2:30 p.m. Monday through Saturday.