The founder of Domaine Alfred will begin a technical venture

One week ago Domaine Alfred, one of the finest Pinot Noir producers in SLO County, held an amicable reception for their neighbors in Edna Valley to introduce the estate’s new owners, the Crimson Wine Group of New York, which was represented by its president and CEO Erle Martin. A guest approached Domaine Alfred founder Alfred “Terry” Speizer, whom she didn’t know was standing next to Martin, and said bluntly: “I just hope they don’t screw it up.” A few moments later when Speizer introduced Martin, the new owner described the embarrassing moment and gently retorted: “Domaine Alfred is a terrific new addition to our portfolio and we promise not to screw it up.” 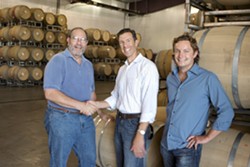 Martin stated in a press release that hit the e-mail boxes of local media only two days before the reception, “When it comes to world-class Central Coast wines that express their terroir and command respect, Domaine Alfred is at the forefront.” Vintners in Edna Valley, hardly a surprise, were already abuzz with the gossip that Domaine Alfred had been sold. Nonetheless, many local insiders doubted it, including me, considering the soft economy. Not a year had passed since I asked Speizer if it was true that Domaine Alfred was on the market, but he only admitted: “Everything is for sale if you’re offered the right price.”

Martin said Crimson spent several months investigating Domaine Alfred, to which Speizer wisecracked, “We danced three months.” They became serious in June according to Martin and offered Speizer the right number. “Consistency is the hallmark of any great producer,” Martin noted, “and Domaine Alfred fit our criteria seamlessly.” Crimson Wine Group, founded in 2007 according to numerous news stories, is owned by Leucadia National Corp. (NYSE: LUK). It moved into the luxury wine market in the early 1990s when it purchased the majority of shares in Napa Valley’s Pine Ridge Winery.

During the interview, Martin explained that Crimson is focused on acquiring or building highly specialized wineries that are “best of appellation estates.” Besides the reputable Pine Ridge in Napa Valley’s Stags Leap District, they own Archery Summit, an acclaimed Pinot Noir specialist in Oregon’s Willamette Valley, and they’re building a new winery, with vineyards, named Double Canyon Vineyards in Washington State’s Horse Heaven Hills appellation. Domaine Alfred is their first Central Coast brand. “This addition brings us one step closer to our goal of offering the finest collection of luxury wines in the marketplace,” Martin said in the press release.

The day before escrow closed (Aug. 28), Crimson invited neighboring vintners over for a glass of wine and salutations. Neither Speizer (who lately sports a mile-wide grin) nor Martin divulged the final price, although Speizer quipped: “They think they paid too much, and I think they didn’t pay enough.”

In online ads, Speizer asked $30 million for Domaine Alfred, which produces 24,000-cases annually. The sale included: their flagship label and their value-priced “DA” line-up; the huge, state-of-the-art production facility; and inventory, vineyards, and the historic tasting room where the original Chamisal Vineyard wines were made and sold.

Speizer, who relocated here from Silicon Valley in 1994 after selling his semi-conductor company Electec, bought Chamisal Vineyard (reportedly for $1 million). He sunk large amounts into the old estate, which had been neglected for years, sparing

no expense. He replanted the dormant vineyard with the latest French clones, including six Pinot Noir and five Chardonnay clones. His success set new standards for other vineyards in the Edna Valley. Speizer made Domaine Alfred a Pinot Noir and Chardonnay specialist to be reckoned with. Their first wines, released in 1998, were made by Speizer with winemaker Steve Dooley consulting. In late 2000, Mike Sinor became the winemaker at Domaine Alfred. By the 2004 vintage, their Califa Pinot Noir earned 96-points from Wine Spectator, the highest score their critics had ever rated any Central Coast Pinot Noir. Their Chardonnay, Syrah, and Grenache also earned high ratings.

During the summer of 2006, just after the ratings were published in Wine Spectator, Sinor moved on to concentrate on his signature family brand, Sinor-LaVallee. He’s also the consulting winemaker for Ancient Peaks. Before the 2006 harvest, winemaker Fintan “Fin” de Fresne joined the winery and worked with Sinor a few weeks before he left.

At 29, du Fresne hasn’t had many seasons behind him but he’s certainly made the most of his career since college. After earning graduate degrees in geomorphology (the study of landforms) and geology, he received a post-graduate degree in viticulture and enology at New Zealand’s Lincoln University. He spent the next two years working as a geologist in Denmark, Scotland, and North Africa. He worked at three wineries in New Zealand: Martinborough Vineyards in the cool climate Marlborough (which he said produces the best New Zealand Pinots), at Matahiwi in Masterton, and at Ngatarawa in Hawke’s Bay.

In 2001, du Fresne moved to California to work for winemaker Josh Jensen, founder of Calera near Hollister. Considered a leader in California Pinot Noir, du Fresne praised Jensen for his experience, knowledge, and down-to-earth attitude. While there, du Fresne worked with another young talent, Terry Culton, now winemaker at Adelaida in Paso Robles. In 2006 du Fresne followed him to work in Paso Robles, and Culton recommended the aspiring young winemaker to Speizer, who was looking to replace Sinor. Du Fresne recalled the offer: “When Terry called to offer the job I realized this opportunity wasn’t going to come up often. It was a bit of a dream come true.”

After getting to know du Fresne, Martin praised him for his passion for the business: “The most important message here is that we’re building off the legacy of Chamisal. Terry recognized the greatness of this historic site. We’re going to let Fin take it to the next level.”

Speizer, who calls himself a “serial entrepreneur,” said he has no plans to leave the area: “I like it here but now I’m getting into the solar-power business. No matter who becomes president, they’ll support anything that’s alternative.”

Du Fresne, who’s every bit as optimistic, concluded: “The general feeling of the staff is that we’re sorry to see Terry go but we’re excited about the potential. Crimson’s bigger portfolio gives us sister wineries to have a kinship with.”