A priest, a cowboy, and a ballerina walk into a bar …

For a two-year anniversary, it's traditional to gift your loved one with something cotton. But on the second anniversary of Ballet Theatre San Luis Obispo's inception, Artistic Director Theresa Slobodnik is offering the community cowboys, a sainted leper priest, world fusion music, and a glimpse behind the curtain into the chaos that ultimately results in a beautiful ballet. That is to say, she's staging one production with four distinct ballets: Rodeo, Wali Sangara, Levez le Rideau, and Damien of Molokai, all of which makes Slobodnik a little crazy. 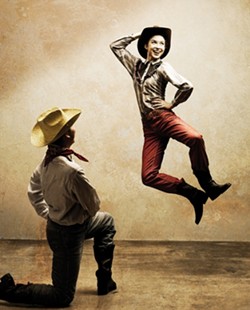 # The madness began with Rodeo, Agnes de Mille's tale of The Courting at Burnt Ranch with a score by Aaron Copeland. Slobodnik's 20-minute version of the ballet has the cowboys, played by a handful of male dancers, leaping around the stage in cowboy boots as their fellow cow-people clap and yee-haw their support.

Slobodnik selected the bronco-wranglin' production as the show's headliner because, in a small agricultural community, it just made good sense. And after staging a full-scale production of Coppelia last spring, the choreographer-and-teacher decided that it was time to shake things up with a series of smaller productions.

In the first, a tomboy cowgirl, played by Sarah Chavez, finds love in the form of a cowboy, but doesn't exactly know how to pursue the relationship. The tale is chock full of dancing wranglers and ropers.

My champion roper is one of my students, Slobodnik said. He's had to take trick roping lessons. Fortunately, he's a very good tap dancer because he's got to tap dance in cowboy boots.

The cowboy boots will disappear for Wali Sangara, a ballet that the company staged in honor of the PAC's 10-year anniversary. Slobodnik altered the original staging for the 15-minute piece.

I had done it in two movements and I'd been wanting to re-set the ballet and put in a center section, Slobodnik explained. The dancing is incredible. I have five men and nine women and it's very primal and very intense.

# The dancers shadow and stalk one another across the stage to live sounds from world-fusion music ensemble Calinambe, who will be playing from the orchestra pit.

For its third production, the company will raise the curtain, revealing everything that happens before dancers can take the stage. Dancers audition and rehearse as the artistic director appeals to benefactors and consults with the wardrobe mistress, culminating grandly in a Viennese waltz to Franz Lehár's Gold and Silver Waltz.

The purpose behind the 30-minute ballet is to dispel audiences of the naive notion that performers magically appear on stage in order for people to truly appreciate dance, they have to comprehend the months of sweat and effort that precede a single show. But Slobodnik insists that Levez le Rideau is funny as well as informative.

But it's the fourth ballet, the tale of a Catholic priest who assisted lepers on the Hawaiian island of Molokai

a colony where those afflicted with the disease were segregated that should transcend all others. While Levez le Rideau has a vaudevillian feel, Wali Sangara is neo-classical, and Rodeo is demi-character (relying upon mime, gestures, and facial expression), Damien of Molokai is something altogether separate.

Damien is a completely different style, Slobodnik insisted. It's a dramatic ballet. It's not dance-y even though there's choreography. Each little move of the leg has dramatic intention. It's not just movement for movement's sake.

The ballet developed from a piano sonata written by Frederic Balazs, who was once Slobodnik's children's piano instructor local pianist Torsten Juul-Borre will perform it at the show. The music has three movements: The first is based on Edgar Allen Poe's The Bells. The second movement is based on a visit to Father Damien's colony on Molokai and plays with imagery of the sea, breezes, and the religious chorale of the church. The third and final segment is based on Carl Sandburg's poems about gargoyles.

As Slobodnik listened to the music, again and again, it occurred to her that the tune told the story of the life of Father Damien. In a manner of speaking, this artistic epiphany was a relief for Slobodnik, who doesn't believe that it's possible to force inspiration. But in another respect, the 19-minute ballet, which traces the life of the saint beginning at his funeral before flashing back to his childhood, was a risk.

It was a little bit scary, Slobodnik said. I've done some work 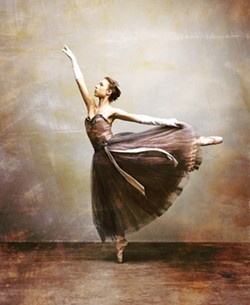 # touching on this genre of ballet, but it's my first big leap into the dramatic. It really has been a big leap for all of us. [The dancers] have to trust that I know what I'm doing with this.

Slobodnik incorporated a spiritual figure into the performance, a being that she calls the will of God, who will be danced by choreographer Lisa Deyo. Deyo is one of about 50 dancers, aged 9 to 80-something, who will be dancing in at least one of the four ballets.

The diverse lineup of ballets, performed by a huge cast, was made possible by the fact that it's been a bumper-crop year in terms of male dancers. In a city that always seems to find itself casting female dancers in male roles, Slobodnik managed to find 10 male dancers. She credits the sudden interest in dancing to television shows like Dancing With the Stars and So You Think You Can Dance, which cast dancing in a more masculine light. It also helps that Gilbert Reed teaches men's ballet and partnering classes at American Dance of SLO.

In this area, guys that have grown up dancing have taken a lot of flak, and it becomes kind of oppressive, she added.

Slobodnik was, admittedly, a little overworked in the weeks approaching the performance in addition to preparing four ballets for a show, she teaches 17 classes at American Dance of SLO and one class at Cal Poly. With the way scheduling at the PAC worked, she also found herself forced to stage a performance a mere three weeks after the Academy's Rhythms show, which starred many of her dancers. But by beginning work on the show in January, Slobodnik increased her odds of completing all four ballets on time and with her sanity intact. And even if she spends her days and nights in a small studio space with dozens of sweaty dancers, she finds the outcome well worth the effort.

It's what I'm doing, she explained. I can't do anything less. I absolutely detest mediocrity. And I think the audience will be tickled to the bone and moved and wowed and educated.

Ballet Theatre of SLO presents Rodeo along with three additional distinct ballets on April 26 at 7 p.m. and April 27 at 2 p.m. at the PAC. Tickets cost between $18 and $33 and can be purchased by visiting www.pacslo.org or calling 756-2787. On April 25, Ballet Theatre San Luis Obispo will perform Rodeo and Levez le Rideau for more than 500 schoolchildren as part of the PAC's Youth Outreach program. The performance is sponsored by an Art Inspires! grant funded by the Community Foundation.