A projectile goes through a window at Supervisor Caren Ray's home 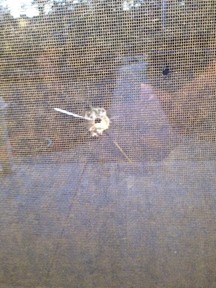 Sometime on the evening of June 29, an unknown perpetrator shot through a window in the Arroyo Grande home of San Luis Obispo County District 4 Supervisor Caren Ray.

Details about the incident are scarce, but Ray told New Times that she and her family are safe and were completely unharmed. Ray discovered the hole in the window after returning from dinner at approximately 9 p.m. She said the incident occurred when the house was empty, between roughly 6 and 9 p.m.

“It’s hard to know what really happened, but it was very disconcerting,” Ray said. “I suspect it was a BB pellet, since the hole is small, and only a really small caliber wouldn’t have shattered the window.”

Ray said that, because of the layout of her house and the angle of the hole, the shooter was likely a fully grown adult who was standing in her yard. She said that detail was “the scariest part” of the whole situation in her eyes.

“It’s definitely a reminder of how exposed my life is as a public figure, but there’s not really much to be done,” Ray said. “I’ll replace the window and try to move on.”

Although Ray is currently embroiled in a heated political race for her seat on the SLO County Board of Supervisors, she said she had “no idea” if the incident was politically motivated.

On June 30, Ray formally reported the incident to the police. AGPD Sgt. Dan Langstaff told New Times that officers went out to look at the window and took a report late on June 30.

According to Langstaff, police don’t have enough evidence to rule out any cause or definitively prove what caused the incident.

“There isn’t any evidence to support the conclusion that Ray was politically targeted, and it just appears to be random—most likely a BB pellet,” Langstaff said. “There’s really nothing to be done in terms of an investigation, since we have no leads or witnesses.”