On a dark and gloomy Saturday, Oct. 29, just days before Halloween, I made my way to the historic Jack House for a decidedly more composed affair than what was going on up Higuera Street, where the college crowd was hitting the bars hard and getting an early start on the holiday. 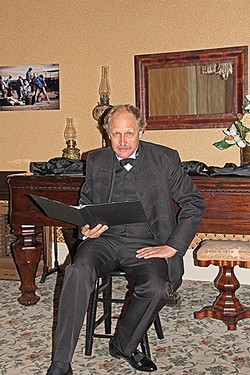 Upon walking in I did a double take, all was quiet. There were no people milling about in front, no signage advertising the ghost stories event I was here to attend. Still, I barreled on and once inside a young lady dressed in a stately evening gown showed me into the parlour room, complete with a piano and chandelier hanging from the ceiling.

About a dozen of us sat in chairs in a semi-circle eagerly awaiting an evening of spooky stories at a fittingly old (and possibly haunted) location. The Jack House was built in 1878 by R. E. and Nellie Hollister Jack and was donated by their heirs to the city of San Luis Obispo. In between the family’s living there and its being donated to the city, the house was rented out and painted in some bad colors for a time, so upon acquiring it, the city invited designers to redecorate the house to look like it did when the Jack family lived there. Had I not been told this nugget of information, I never would have guessed. (The fact that much of the furniture and household objects are from when the family lived there helps with the feeling of stepping back in time.) 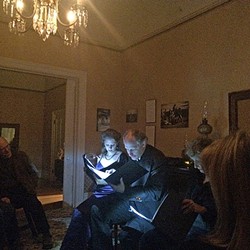 Finally the lights dimmed and candles flickered as the main event began. Augustus Hare (as played by James Papp, president of the Friends of the Jack House), who in Victorian England traveled to stately homes, took down direct recountings of hauntings, and performed them for audiences, was to come back from the dead for one night to tell us his stories of all things supernatural. Other readers joined in for supporting roles.

“One should not ever be told that one’s room is haunted,” Augustus began one story. (Indeed, that seems quite rude.) He told stories of vampires crawling up the windows of fair maidens, of a mysterious black dog that only some people could see, of a woman who when she dreamed went to a beautiful house (only later to find that she was the ghost haunting that house), of evil spirits running amok in children’s bedrooms, and more.

When the night ended, I walked to my car a little faster than normal, telling myself that the flickering shadows and thrashing winds of the night were just that, and nothing more.

Ryah Cooley is sleeping with one eye open at rcooley@newtimesslo.com.