Co-writer/director John Krasinski helms this follow-up to his wildly successful 2018 sci-fi horror film A Quiet Place, about The Abbott family—father Lee (Krasinski), mother Evelyn (Emily Blunt), deaf daughter Regan (Millicent Simmonds), oldest son Marcus (Noah Jupe), and youngest son Beau (Cade Woodward)—who are living in a post-apocalyptic world inhabited by blind monsters attracted to sound. After a flashback about how the invasion took place, Part II picks up right where the first film ends, with the Abbotts—now without Lee and Beau, who were killed, but with a newborn infant—escaping their compromised home and venturing out into the world, only to discover the monsters that hunt by sound aren't the only dangers that await them. (97 min.) 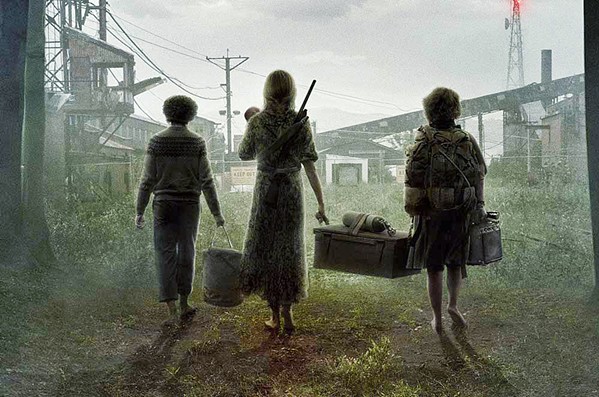 Glen Like its predecessor, Part II is dripping with tension. Unlike its predecessor, there's no big buildup to the creature reveal. Krasinski shows us the monsters right in the opening flashback as their homey little burg goes about its business with a Little League baseball game. Then the sky turns to fire as the aliens land, and soon all hell breaks loose. It's a fun opening that quickly settles into the taut resolution of the first film when Lee died to protect his family. Now Evelyn, Regan, Marcus, and the infant have to find a new safe haven, so begins their journey to the next signal fire over and Emmett (Cillian Murphy), a family friend who lost his wife and young son to the creatures. This is a story about people in a crisis and the way they react. Lee was a good man, Emmett less so, but as the story carries on we meet people who've lost their humanity entirely. It's also about Marcus and Regan learning to stand on their own and take care of themselves. For a monster movie, it's got surprising emotional depth.

Anna I loved getting the Day One story, and seeing the Abbotts' everyday life torn to shreds in an instant makes for such a perfect, gripping opening sequence. I was immediately gasping. Krasinski once again proves he knows how to keep an audience captive and invested from minute one. The first film was visceral—from Evelyn's silent birth in the tub while the monster lurked to the nail going through her foot, that movie was an experience to see—and Part II lives up to its predecessor. We feel the loss even harder this time with Lee absent after the initial flashback and his daughter fiercely defending his vision and sheer will to keep his family alive. I know sequels can sometimes be a letdown or feel like the first movie on repeat, but this strays far from rote and becomes its own beast. Simmonds is a force to be reckoned with—she takes the reins here and does a fantastic job. Murphy's Emmett is a great addition here too—we don't know whether he's on our team or not, but he's a man who had and lost a family and that won't let him turn his back on the Abbotts even in a world where everyone must fend for themselves. He becomes a reluctant hero, and his performance is on point.

Glen I don't know if you recognized him, but Scoot McNairy was the evil dude in the marina. He's such a great character actor. Djimon Hounsou is also terrific as the man on the island. It's a great cast overall, and the ending offers a hint of closure. Marcus and Regan have proved their mettle. I don't think Krasinski going to try to milk this series, and he shouldn't. This two-part film is pretty near flawless. I will, however, be interested to see what he directs next. The Hollars (2016) was a very effective dramedy and very different from his 2009 debut, Brief Interviews with Hideous Men, based on the David Foster Wallace collection of stories, but neither of those films hinted he was capable of A Quiet Place. I get the feeling he's an artist who likes to mix it up, so he could go in any direction. Like the original, this is definitely a film to see in the theater, and now that Downtown Centre Cinemas is reopened, not to mention The Palm Theatre, SLO's finally got movies going again. Thank goodness!

Anna It does feel great to be back in the theater, and this movie is a perfect reason to go. It should be dark and free from distraction to really get that spine-tingling feeling Krasinski makes happen. Blunt is always fantastic and her fierce, protective mother role here is well done. When Emmett is reluctant to help the Abbotts, she appeals to the tried-and-true soft spot all parents have—Lee is gone now, she needs help, and she has a tiny baby in a box and nowhere to turn. The monsters in these films are scary enough—their heads open like a lotus and they're quick and unforgiving. The smart thing Krasinski does here is make the movie about the characters and not the monsters. We know what to be scared of, so he gives us a lot to invest in. I wish I could watch both films for the first time again; they're an experience to be had. I'd hate to see this strung out over more films, and I think Krasinski has the good sense not to, but I hope that he keeps his work as interesting and dynamic as his track record shows. Do yourself a favor and buy tickets for this one. It should be seen on the big screen.