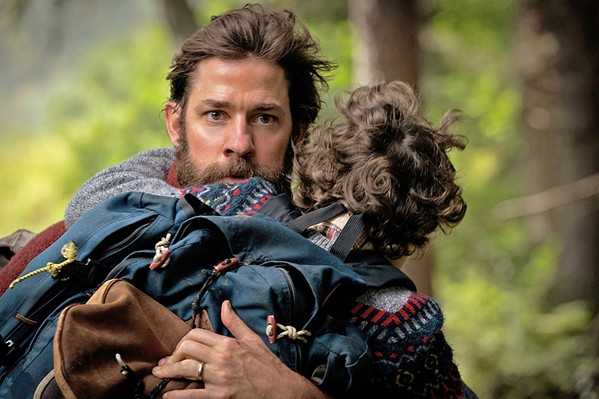 Glen While the synopsis may sound like standard-issue sci-fi horror, A Quiet Place is instead throat-clenchingly tense and a thoroughly thoughtful meditation on parenthood, family, and guilt. The film isn't concerned with where the creatures come from or how they got there. Yes, we see a few newspaper front pages—with headlines suggesting it's a worldwide phenomenon—that are pinned up in Lee's workshop, where he tirelessly toils trying to improve his daughter Regan's hearing aid. A scrawled-on white board asks, "Weaknesses," but the creatures appear to be indestructible—they're all gill-like earflaps and sharp teeth on long-limbed grasshopper-like bodies that can tear a human to pieces. Because the creatures are blind and don't appear to have a sense of smell, the film ups the terror level since the creatures can be in the very same room but not know someone's there ... provided the person stays absolutely silent. The few remaining pockets of civilization are in total survival mode, and every night, Lee climbs to the top of an ominous grain silo on their secluded farm and lights a signal fire, waiting as a handful of others light up in the distance. Lee also tinkers with his ham radio, trying to find out if anywhere's safe, but to no avail. The family's day-to-day existence is silently picking crops and doing chores, giving the kids reading and math lessons, preparing a soundproof box with an oxygen supply to deafen the cries of their impending baby, and occasionally venturing to a nearby town to scavenge through abandoned stores and to a river to collect fish they've caught in baskets. All they have is each other, and Lee and Evelyn's primary and immediate goal is to keep their children safe. The film is nearly silent, with almost all dialogue mouthed and accompanied by American Sign Language. It's a fresh and remarkable take on the horror genre, with scenes that will have you white-knuckling your armrest or silently crying to yourself in empathy for the family's plight. It's just brilliant!

Anna I was pulled in from the beginning; just the thought of having to live every moment in silence and utter terror gives the film a great premise to work with. I'm always impressed when a film can pull off a lack of dialogue—Robert Redford's All Is Lost is a prime example—and doubly so when the silence is used as either a tool or weapon toward the audience. There is communication in this film, and it's used to convey what the audience most needs—the dynamics of this family's relationship. I'm a big fan of both Krasinski and Blunt, and as a director Krasinski really seems to have hit his stride with films essentially about family: I thought The Hollars was an exceptionally cast and understatedly great film, and A Quiet Place matches it with a horrific twist. Early on we realize the totality of the Abbotts' dilemma: Two of their children are old enough to grasp the importance of their silence, but how do you communicate to a 4-year-old the danger faced by the simple act of dropping a hard plastic toy to the ground? How do you ensure your deaf preteen isn't making noise without realizing it? It's a bleak world, and one that feels nearly hopeless. We start at day 89 and skip to about a year later, and while the normal things in a family still exist, they're forever changed by the silence that protects them. Instead of plates they use pieces of fabric at dinner; Monopoly pieces have been replaced with crocheted and cloth baubles so they won't make noise. Soon Evelyn's baby bump grows too big to ignore, and the rest of the film I sat clutching my face, wondering how in the world this family will manage to survive.

Glen If you've read anything about the film you've no doubt learned that Blunt, who's married to Krasinski, suggested a friend of hers for the role of Evelyn, but after reading the script, she asked her husband to give her the role instead. Well, Blunt is simply incredible as Evelyn. She owns the character, and her birth scene will go down in the history of horror as one of the most gripping sequences ever set to film (well, probably video, but you know what I'm saying). It's also worth mentioning that deaf Regan is played by a deaf actress, and Krasinski said she was important to give the role authenticity as well as helping the other actors learn sign language. Most recent horror movies have bored me due to a lack of scares, flat characters, or hackneyed writing and direction. A Quiet Place falls prey to none of that, and it offers a badass but open ending, which I found hopeful, though my wife didn't—that's deft filmmaking in my book.

Anna I was also reminded of It Comes at Night while watching this, another gripping and spellbinding horror film that plays to the terror of isolation and an unknown enemy. The creatures in A Quiet Place are certainly terrifying, alien beings that are all ears, teeth, and hooks that move swiftly and show no mercy. They seem to have no weakness, but thanks to happenstance and a bit of cleverness, the idea of a way to fight back does come about. I wouldn't say that the film ends hopelessly; in fact, I do see the last scene, and especially the last moment, as a wonderful, desperate grasp at hope for the Abbotts. They've proven they can survive almost anything. However, it's hard to see how anyone can survive a lifetime in this world, but by God I'm rooting for them! See this one in theaters. This is best viewed surrounded in darkness and free from distraction. I'm betting you'll be just as glued to the screen and storyline as I was.