Good news! I wasn’t killed, beaten, or even threatened last Friday, Feb. 3 when I stopped into the opening reception for The Phantom Project’s first art show, about which I wrote last week when I chronicled my task as a juror along with Steven DeLuque and Tim Anderson. 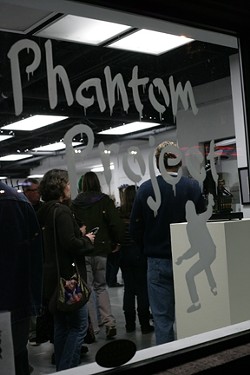 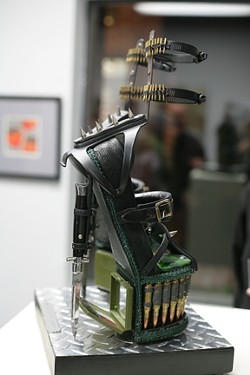 In fact, people were surprisingly sympathetic—even those we rejected. Take plein air painter Lachlan MacDonald, for instance, who emailed me this message:

“Dear Glen, you are a fortunate judge as the only one of the notorious trio to have a column to display your consternation, compassion, and humor at judging of The Phantom Project. I think the community is well-served by offering this kind of exposure to so many artists and look forward to the next opportunity to be rejected (but at least considered) for a display in an empty retail spot. My consolation prize is having my ‘Sweet Springs Afternoon’ painting in the New Times (Feb. 2, p. 36), huddled on the floor with two other aspirants. The photographer (you?) must have thought it worthwhile including. Lachlan MacDonald, Phantom Reject.”

Very sweet of you, Mr. MacDonald!

What’s really been fascinating is watching how instrumental Facebook has been in coalescing all these artists and art lovers into an online community. The event page is full of comments, and Michael Reddell, one of the event's organizers, decided there was so much ongoing activity on a page whose event date has now passed, that he made a Facebook page for the ongoing series. Log onto Facebook, find it, “like” it, and join in the conversation.

Back on the event page, one of the event helpers, Peggy Sonoda, took in art and gushed about her interaction with Lena Rushing, who had two paintings included in the show: “I’m recovering from yesterday’s intake. What an incredibly rousing response to the Call for Artists. As Lena Rushing told me when I checked her in, it gave her ‘goosebumps to see all the excitement.’ Thanks to all who showed up with their work, congrats to those who were selected, and to those who weren’t, we’ll see you next time.”

People were just plain excited about this show! Julia Alexis wrote, “I can hardly wait to see the show. There was a high level of excitement at the day of entry. I believe that this Phantom concept will encourage entries that would not be seen anywhere else in the Central Coast.”

Of course, the problem with a juried show is some people are rejected, as Reddell wrote on his blog:

“While this kind of show is very fast and efficient to jury, it is also the most traumatic for artists. If at least one of your pieces is accepted, you’re spared the worst of the trauma. But if not, then your entire ego is laid bare, and you have to do what one artist at today’s intake and jurying event good-naturedly called ‘the walk of shame.’ You can’t just slink away to nurse your wounded ego; you have to pick up your work and walk it out the door for all to see. I write about this to make a very important point. Rejection is the price of admission into this world of the full time artist. You will experience it. If you’ve been at it for long, you know this. If you’ve been at it for long, you’ve learned to steel yourself from it when it comes.”

Here’s what’s important. A show like this, especially the first one in which people are bringing in their very best works, results in a stellar collection of art. As Robert Oblon wrote on Facebook after the opening, “The opening reception this evening was as close to an L.A. opening since I’ve been here on the coast. Great turn out; everyone’s work looked great.”

True, that! Cheers to The Phantom Project! Congrats to the included artists! And for those rejected, keep the faith. Creating art is its own reward.