A rebirth in Japanese dining

Get out of downtown for a nice meal

On Valentine’s Day I find romance in sharing a special meal with my soul mate, Dan Hardesty, especially one that can be eaten without utensils. That’s why I recommend considering SLO’s newest sushi bar, Kumi-Ko in the Marigold Shopping Center, for your romantic evening celebration this Feb. 14. Pronounced ku-mee-ko, it’s not downtown but it’s certainly on the heavily beaten path in its location alongside Broad Street near Tank Farm Road. And it’s a welcome new addition for the many businesses and residents living on the city’s outskirts, who can enjoy an upscale restaurant without having to drive downtown. 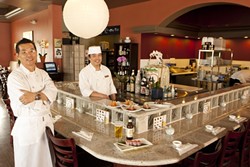 On the first visit, I tried the new menu of Japanese tapas and found them refreshingly different, exotic, and delicious. These tapas are much more than sushi which provides simply a slice of raw fish atop sweet rice. There are 12 tapas choices. I loved number 2; a slice of raw salmon becomes the wrapper, entwining delicate slices of zingy red onion, sweet tomato, and herbal sprouts. Number 5, the beef tataki wrap, is a slice of seared-rare filet mignon wrapped around julienned veggies, and drizzled with an excellent, house-made ginger sauce. Number 10, the English cucumber salmon roll, was pleasantly surprising with smoked salmon (I usually prefer raw salmon at sushi bars), wrapped with thinly sliced cucumber, plus capers and a horseradish cream sauce. Another delicious combination was number 7, sesame spicy tuna balls, flash-fried but still rare inside, with a delicious spicy sesame dressing. The tapas ranged from $3.95 to $7.95.

When I heard about this new sushi bar, I was eager to try it based on my tipster’s review: “We just stopped in for a roll, but it was so good we ordered the scallop ceviche and that was so good we ordered more food.” That’s what I want to hear whenever anyone recommends a restaurant—it makes me rush over to check it out. And during two very satisfying meals there, Kumi-Ko never let me down.

The biggest surprise was finding the experienced restaurateur Bruce Lee of Sushiya behind the tapas bar. I met Lee the summer of 2007 when I wrote a review of Sushiya, which I also liked. Lee, who co-owns Sushiya in SLO with Bob Park, is still a partner and helps manage it. And he is the sole owner of Sushiya in Santa Barbara. His restaurant career began in 1983 and continued after he emigrated to the U.S. in 1994. By 1998 he had opened his own restaurant in Pasadena, and he opened a professional Japanese cooking school in 1999.

With Kumi-Ko, Lee has created an interesting new concept in Japanese dining for SLO County. “We’re offering a renaissance in Japanese cuisine. I’ve gone back to the old recipes and it’s like nothing you’ve tasted until now,” Lee explained. “There’s so much fusion now so I wanted to create something original. Not traditional. I want to create original flavors; I believe that is what tastes delicious.”

Lee was enthused about the new Japanese tapas on his menu, and the tapas bar. “The tapas bar is totally different from a sushi bar which has a case for the fish that blocks the view of the sushi chef preparing your food,” he pointed out. “I wanted a new concept for food that’s presented in small, beautiful dishes.” While in college, Lee’s major was music, but he said that he chose a different career by entering the food industry. “My brothers are doctors, both surgeons. I use the knife, too, only I’m a fish doctor,” he laughed. Becoming serious again he added: “Food, like music, is good for the heart. It’s a mission and the food concept is very important to me.”

Lee is very involved at Kumi-Ko to ensure that everything served is at the peak of freshness. And he drives the point home to his staff in lessons on cooking and serving. “I tell my employees that they should never serve anything to our customers that they would not give to their new baby. I think of the customer as my baby.”

Sushi chef “Cat Fish” Kim has had a long, professional relationship with Lee. They worked together in Pasadena when Lee opened the first Sushiya. Cat Fish later moved to Utah where he opened his own sushi restaurant, but he didn’t like the weather.

“It was too cold,” he laughed, “so I moved back to California.” Dan asked if he was a baseball fan to which he promptly replied: “Catfish Hunter! It’s my American name.”

Lee described him as a very talented chef in the kitchen or at the sushi bar. He suggested that I order “omakase” during my next visit which means I would leave my meal to the chef’s choice. He provided me an amazing taste of one omakase dish: yellowtail collar, where you’re presented with the tuna still on the bone with pieces cut to eat raw. Then the chef broils the carcass so the meat still on the bones becomes crispy, and then presents it back to finish. It was a fabulous treat. Forget about the mall location, this Japanese restaurant offers upscale dining.

When I relocated here in 1996, we foodies used to ask each other: why are there so many Italian restaurants? Today, we could say the same thing about sushi restaurants. But the one thing that matters most, and it’s true of any type of restaurant, is that the owners and chefs are passionate about their jobs. When you find that kind of proprietor, as I have always seen in Lee, you can count on getting good quality food and excellent service every time—Lee values his customers.