A recollection of fragmented landscapes

December is a muted time on the art scene. Art After Dark is just 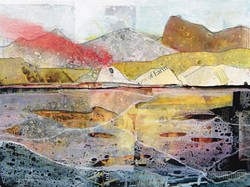 # that--dark--and most open houses and parties focus not on an art opening, but shopping, wine, and merriment.

Shoppers won't notice the holiday lull at the famed Steynberg Gallery, though. Always exhibiting the best and brightest artists in the county (Mark Bryan) and beyond (Dennis Larkins), Steynberg challenges the senses. It's been awhile since an art exhibit reached out and grabbed viewers in a passionate chokehold, but Sarah Winkler's latest show, titled "Surfacing," does just that.

The 34-year-old Winkler, a self-proclaimed mixed-media artist, is also a part-time graphic designer and worked at the SLO Art Center for four years, first as a volunteer, then as the gallery sales manager. The most efficient way to describe her, however, may be as an ex-pat. Winkler--who is funny, warm, and blonde--was born in Manchester, England, now resides in Atascadero, and has lived in exotic locales all over the world. She called Malawi, Africa, home when she was 8.

Her time on that continent had a dramatic effect on her, she explained, and Africa shows up constantly in her artwork. The Africa she remembers is the "old-style Africa," she said: "Not too many ex-pats." She recalls herself absorbed into the tribal culture, and being transformed by nature--a common thread that continues into her work today.

"There was a sense of adventure with the seasons, the fires, floods, and, of course, the intense and abundant wildlife," she said.

Winkler has also lived in Brunei, Borneo, a place south of Vietnam. Her family finally made the departure to the United States--to New Jersey, of all places--in 1989.

# "I loved it," she said. "It was so different than anything I'd experienced: the diners, the Italian food."

While there, she studied acting, creative writing, and art, and earned an English degree. However, art became her No. 1 passion when a neighbor in England taught her to draw. That's where her fundamentals took root, and she's been a serious artist ever since--for half of her life. First, she explored realism with animals and landscapes, then took a foray into painting poetry line by line.

"That's how it changed from boring old painting," she said. "I was fascinated with layering of imagery."

That layering has stood the test of time in her work. A few years ago, Winkler said, she "became fed up with acrylics and the surface quality--it wasn't rich enough." She didn't want to work with toxic oil paints, so she had to find another way to create art. After seeing David Hockney's Pearblossom Highway, she realized she had found a new direction.

"It's a landscape, but so interesting, and that's the way I wanted to go," she said.

After experimenting for a year and a half with textures and various materials, she found her groove in collage. Travel and adventure magazines are her main sources for images. The process is interesting and messy--Winkler distresses the pages and uses a household nontoxic degreaser on the tears after sorting her finds by color.

"I don't work from photos or plein air, but from my memory," she said.

By working with shapes, lines, and textures, Winkler said, she tries to create an interesting picture, not just a reproduction of a landscape. She wants to paint not what she sees, but the experience. 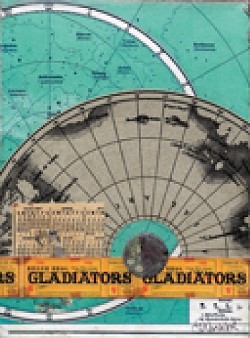 # Some images are based on trips she's taken to the Sierra Nevadas and Moab in Utah.

"Sometimes, current events collide with what I'm painting," she said, like seeing bears in Tahoe, where she frequently camps. With that particular piece, she punched out the trees from a Lake Tahoe travel brochure, which gave her the texture she was looking for.

Winkler's latest inspiration stems from recent wildfires that affected many lives in California. In the meantime, she'll continue with her collage, pure and digital. In all her work, Winkler demonstrates an understanding of the complexity of modern life.

"We rarely have those moments of serenity [like we used to], so finding another interpretation is important," she said.

As for her art as a whole, she explained that she's always trying to extend the process, to make it more complicated, looking for "a sense of journey--not a start or stop, but a journey."

Christy Heron is always starting some journey or another. Wish her well at cheron@newtimesslo.com.