The scoreboard read 67-51 in favor of Mission Prep as Luis Santiago quietly celebrated an undefeated league run on a chilly 2006 night in the sleepy town of Templeton. In the Royals' season finale, the star forward crashed the boards for 11 rebounds to help put the final assurances on a top seed in the upcoming CIF playoffs. Santiago overcame an injury in the following weeks to again propel his team on a postseason surge that placed another championship banner in the campus gym. 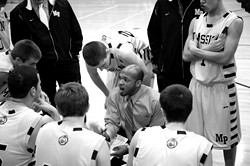 # That banner would soon be gone.

In the prep sports world, all trends are short-lived and most developments come about at a blistering pace. Yet, as Mission Prep prepared for the state playoffs exactly one year ago, it would have seemed impossible to predict the extent of change that would come to the program over the next 12 months.

The lights over Cowitz Court had hardly cooled from the Royals' CIF title run when an investigation into recruitment practices at Mission Prep stripped the program of many of its recent accolades. The decision reached by prep sports officials ordered the return of two titles and placed the school on probation until 2008 an adjudication granted due to the Royals' self-surrender.

At the heart of the controversy was young coach and athletic director Tom Mott heir to a storied family legacy and one of the most successful leaders in program history. The contested impropriety involved the coach's active recruitment of several imported players, including the Puerto Rico-born Santiago.

Mott resigned shortly after the scandal, soon followed by school principal Father Charles Tilley. A front of bad publicity descended on the program, much to the chagrin of Mission Prep's loyal alumni. Many, to this day, strongly feel that Mott got a bad shake that his positive contributions went ignored.

"He made a lot of mistakes, but he did it for the kids," Mission Prep parent and alum Barry Epperson said.

"The topic is past tense," agreed booster Jim Gall. "All that negativity didn't help anything it didn't help the kids, and really that's why we're here."

First-year head coach Darren Harris has other things on his mind these days. How will his defense hold up against more explosive backcourts? Will the Royals' post game remain its strongest asset against larger valley squads? Will Mission Prep's early upset of highly ranked Crenshaw foreshadow its postseason performance, or a recent home defeat to Renaissance?

Yet no matter how valid those concerns, as the CIF-compliant Royals look to embark on their first playoff run since the resignation, they face another challenge: overcoming the stigma of the Mott era's calamitous end. Relatively few teams occupy the upper echelon of Division V prep basketball in California the smallest field in a system organized by school enrollment. Within this tight little oligarchy, most programs likely carry a vivid memory of the scandal.

"It was disappointing for us because, after the season's done and finished, it still affected us it drastically changed our seeding," said Immanuel coach Matt Toews, whose team lost to Mission Prep atop the D-V bracket last year and, as a result, had to face lo-Cal powerhouse Santa Fe Christian in its state playoff opener.

"Because we're a pretty small community, the first thing teams will think about when they see Mission Prep will be the situation last year."

If the scandal isn't forgotten, has it perhaps been forgiven? Mission Prep officials hope so, at least. Athletic Director Brady Luck, who took over the administrative half of Mott's position, asserted that local teams have already exhibited a willingness to move on.

"I think we're moving in a positive direction," Luck said. "We haven't felt any backlash from the teams we've played, or the coaches, or the public. Other athletic directors, who have had an opinion in the past, have kept an open mind."

"I try not to think about it," the coach commented. "I'm here to help these kids grow as players and young men that's all I really care about."

While several local coaches approached by New Times said it's certainly time to move on, they said it's also important to remember the roots of the scandal and how long the situation went on. Interviews indicate that Mission Prep's recruiting tactics were, at least on the Central Coast, largely common knowledge.

"It seemed to be obvious to us, when there were so many foreign kids coming in every year, that something wasn't right," 29-year Paso Robles coach Scott Larson said. "Those placements are supposed to be random."

Larson was one of a few coaches and athletic directors who filed inquiries with the CIF Central Section prior to Mission Prep turning itself in. The longtime Bearcat helmsman said nothing ever came of his complaint.

As of publication, CIF Central Section commissioner Jim Crichlow had not responded to phone requests for comment.

But, for Mission Prep, it's a new day. Harris doesn't like talking about the controversy and visually cringes at the mere utterance of the word "scandal." Few of the fans on hand for a recent contest expressed enduring concern.

"I definitely think there were problems and they took care of it," Larson said. "It looks like they're back doing things the way they should be done."

After dispatching Coast Union 61-23 in its final regulation game on Feb. 16, the Royals (20-5) will enter the postseason the night of Feb. 23 against the winner of a prelim contest between Riverdale Christian and Laton.

Putting up an average of 55.6 points per appearance compared to a 71.2 mark in 2005-06 the once-explosive Mission Prep offense seems shorter on octane these days. Many of its players spend less time worrying about doorway clearance. The crowds are smaller and the student section proves less audible.

For the time being, however, the Royals have no complaints.

"The team is playing the game the way it's supposed to be played they're playing with honor," Luck added. "It became clear to me early on that we were going to have to make sure to be at our very best this year.

"And they have been."

"All my kids have gone here," explained alum Rico Barnes. "We've seen a lot of programs founder in my time. The thing about Mission Prep is it grows in the best of times and the worst."