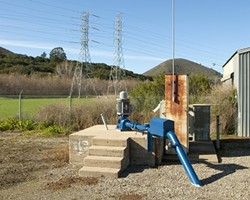 With little to no rain in sight, cutbacks on state water supplies, and a smattering of nitrate-tainted groundwater, Morro Bay is officially upping conservation requirements on residents from moderate to severe.

Morro Bay relies heavily on water received under the State Water Project. But this year, state water allocations are coming in at just 5 percent of normal—and possibly less. The exact calculation to determine Morro Bay’s state water supply is complicated, but the end result is that the city will receive a small fraction of its 1,313 acre-foot entitlement, and perhaps even none at all.

The Central Coast Water Authority (CCWA), which is responsible for the local arm of the State Water Project, warned its member agencies to be prepared for the allocation to drop even further, perhaps all the way to zero.

Such a low allocation of water means Morro Bay must rely almost exclusively on its reserve water. The city has access to about 3,072 acre-feet of water held at the San Luis reservoir west of Los Banos, of which it can pull up to 1,313 acre-feet per year. That water is real, actually available, “wet water,” Livick told city councilmembers on Jan. 28, though it’s still subject to evaporation.

“We can’t feel confident about what’s going to happen with the future of state water,” he told New Times.

Following Livick’s Jan. 28 presentation, Smukler commented that the reserve water is “like a bank account that we’re not adding to and we’re living off of.”

And the city’s other sources of water range from expensive to restricted.

One well field, the Ashurst, was taken offline by California Department of Public Health in 2009 due to high nitrate levels. The city’s other wells in the Morro and Chorro Valley well fields are accessible, but must be treated for nitrates before going out to the public. Additionally, the city can only pump from the Chorro Valley wells when the creek flow is at least 1.4 cubic feet per second, which isn’t the case. As of the last measurement, that creek flow was clocking in at about 0.7 cubic feet per second, according to Livick.

Livick is quick to point out that the situation is manageable for now because of the reserve water, but noted “that doesn’t mean we should go hog wild.”

In fact, Morro Bay residents will find themselves facing a new set of restrictions under the recently adopted “severely restricted water supply conditions,” which include:

City officials will crack down on offenders first with a warning of administrative citation, followed by a $100 fine for the second offense, $300 for a third, and $500 for a fourth, Livick said. Officials are urging residents to conserve as much as possible, calling conservation the cheapest source of water.

SLO County Public Works Director Paavo Ogren told New Times that Morro Bay’s state water supply is secure due to reserves. However, as the possible allocations continue to fluctuate for all recipients in California, “it is an issue of continuing discussion.”

In a worst-case scenario—in which state allocations and the reserve run dry and the drought continues—Morro Bay will be left with only its desalinization plant, which is “very expensive,” Livick wrote in a letter to city officials. Under that scenario, the city’s wells would likely have run dry, leaving desalinated seawater as the only option.

“I think that would be a very dire situation, and I might even do a rain dance before that,” Livick told the City Council.