A remembrance of libraries past

Once upon a time the public library was considered a pillar of democracy, but today itâ€™s a different story, especially in San Luis Obispo County: Itâ€™s a tale of survival

Once upon a time the public library was considered a pillar of democracy, but today itâ€™s a different story, especially in San Luis Obispo County: Itâ€™s a tale of survival

CHAPTER 1 Library fact: Reference librarians will find answers to your questions on just about any subject, from recipes and car-wiring diagrams to genealogy to local history. Free.

â€œHow could this happen? Not the libraries! Not in Steinbeck country.â€?

That was the reaction when news of the impending closure of all three public libraries in Salinas made headlines in California early last year. Similar shock and dismay was heard here on the Central Coast as well. In the case of Salinas, an $8 million budget deficit was the culprit. In San Luis Obispo County, it was the defeat of Measure L in November 2004.

Instead of the 66 percent of votes required by law to enact a tax hike, Measure L couldnâ€™t even muster a simple majority; a mere 48 percent of county voters endorsed the plan. The impact, according to Reynolds, was immediate: â€œThe county library system let go of most of their temporary workers and reduced the hours of part-time employees. We just couldnâ€™t afford them.â€?

Blame for the failure of Measure L has been attributed to a lack of resources necessary to mount an effective get-out-the-vote campaign, plus opposition from those who felt other services were more important. â€œRegular [library] users didnâ€™t see how we were suffering,â€? Reynolds says today. â€œThere wasnâ€™t that sense of crisis like there was in Salinas.â€?

According to Rick London, president of the Foundation for SLO County Public Libraries, it was and still is a matter of priorities. â€œWhen it comes to development,â€? he asserts, â€œyou need fire, police, water, and schools. Libraries? I donâ€™t think so. You need to have certain infrastructure in place to build more homes. So thereâ€™s a fundamental difference in philosophy as far as the importance of libraries.â€?

Since the cutbacks, most of the public outcry has been about the reduced operating hours. Heather Billing, a stay-at-home mom, says, â€œWe use the library for the children and I use it for cookbooks and fiction. Weâ€™ve come on Mondays and found it closed. I wish it were open more often.â€?

Wendy Fertschneider, an employee with county mental health, agrees the hours are now inconvenient: â€œI come here every week with my 5-year-old son. If thereâ€™s a Monday holiday, they close on Tuesdays, which is now the only late night, so if you work you can only come on the weekends. Twenty years ago libraries were open most evenings and weekends; they were much more accessible.â€?

Shell Beach librarian Cathy Marvier, who went from full-time to part-time and lost all her temporary staff, now makes do on her own. â€œWeâ€™re only a one-man branch,â€? she notes. â€œIf I get sick, the library just wonâ€™t open that day.â€?

Branch managers throughout the county bemoan the deterioration of facilities and paucity of equipment, from computers to DVDs to copy machines to basic Internet access. Debra Jurey, librarian at the Santa Margarita branch, says her situation is critical: â€œWe need a new roof. We need a new building. We had a leak in our childrenâ€™s section. Itâ€™s a mess right now.â€?

Adds library system director Reynolds: â€œIf our libraries are crappy, people wonâ€™t use us â€” weâ€™ll be forced to close. Our libraries are rated the worst in the nation in terms of hours open. What we call normal would be unacceptable anywhere else.â€?

Indeed California libraries rank 41st among the 50 states in terms of funding, staffing levels, circulation, and hours of operation, according to the respected Hennenâ€™s American Public Library Ratings. Many of Hennenâ€™s top-rated libraries are located in Ohio. â€œThe key difference with Ohio libraries is they get a piece of the state income tax, and local government adds on,â€? SLOâ€™s Reynolds points out.

CHAPTER 3 Library fact: If a book exists in a library anywhere in the world, you can get it through an interlibrary loan. Free (unless the lending library charges a fee).

For the moment it appears that California libraries will have to look to private sources and local ballot initiatives â€” not the state â€” for any additional funding. Example: Following the threat of complete shutdown in Salinas, a fund-raising group called Rally Salinas! collected an impressive $798,000, and voters this past November supported a half-cent sales tax increase, a portion of which will be earmarked for libraries.

Throughout San Luis Obispo County, the library foundation and several other nonprofit groups calling themselves Friends of the Library now find themselves in a perpetual state of fundraising. Former efforts to lobby lawmakers for subsidies have morphed into a kind of Sisyphean task: Beg private citizens for money to keep things running â€” until the cash is gone and the begging must start anew. â€œWe have book sales twice a year to help raise money,â€? says Shell Beach Friends of the Library member Kate Riggins. â€œAt our last sale we raised $800 and used some of the money to hire a substitute to cover our librarianâ€™s vacation. Otherwise we would have had to close.â€?

In San Luis a book-buying campaign is in the works for February. The goal: $100,000. â€œItâ€™s more than books,â€? Reynolds acknowledges. â€œItâ€™s our future. Itâ€™s a book drive planned as an appetizer. The meal will be a once-a-year fundraiser asking those who voted for the library to give what they would have had Measure L passed.â€?

Perhaps as important as money are peopleâ€™s attitudes toward the public library. The â€œgreat pillars of a democracy,â€? as Rick London refers to libraries, are taken for granted, or worse, are slipping into irrelevancy. Public libraries, London informs, at one time were a revolutionary concept â€” they were created so common people would have access to information â€” and information is power. â€œItâ€™s the relationship with the library that has an impact on our lives and a profound impact on society,â€? he says.

Today, however, libraries face unprecedented competition for citizensâ€™ time and interest. The rapid rise of the World Wide Web, staggering breakthroughs in information technology, and the general decline in reading among the nationâ€™s young all have conspired to present enormous challenges to public libraries.

Brian Reynolds counters that libraries are about much more than reading. â€œThe free public library is the only public agency dedicated to helping people â€” rich or poor â€” to survive, succeed, and flourish in todayâ€™s competitive world by promoting good reading, writing, speaking, research, and vocational skills.â€? The Web threat, he contends, is more perception than reality. â€œStudies show that people who are heavy Internet users are heavy readers. They complement one another. Most media complement each other; they donâ€™t replace each other.â€?

But even devoted readers have other tempting choices, most notably the successful commercial and social milieus created by retail giants Barnes & Noble and Borders, now widely copied by independent booksellers: a place to relax after work and on weekends, buy a cappuccino, plop down on a comfortable sofa, browse books or the Internet on wireless networks, hang out with friends, make new ones, and often actually make a purchase. Again Reynolds is unfazed. Bookstore customers and library users are pretty much â€œthe same folks,â€? he says. â€œThe competition is a myth. People come to libraries to borrow books; they donâ€™t come to spend money.â€? Nonetheless Reynolds says SLO libraries are trying to be more food-friendly. Covered drinks are now allowed, and perhaps in the future theyâ€™ll offer a selection of baked goods â€” but not yet.

Reynolds argues that the major competitor for public libraries, aside from real and imagined constraints on peopleâ€™s time, are the clever but insidious business interests who want to â€œcommodifyâ€? everything. According to Reynolds, these are â€œthe powerful economic forces trying to convince us that only through their resources â€” like machinery, databases, and experts â€” can the â€˜truthâ€™ be found.â€? In fact, he continues, their real agenda â€œis to try to sell you something or rent it to you often or for the rest of your life. A public library can provide even better resources virtually for free.â€?

Higher quality, lower cost. Sounds like a winning combination. But in San Luis Obispo County itâ€™s been a loser. How does Reynolds respond to that? â€œI agonize about any missteps I might have made,â€? he allows. â€œIâ€™ve lost two elections now. Perhaps my vision and skill sets could be better.â€?

But he says heâ€™s not about to give up. â€œWeâ€™re trying to reinvent ourselves,â€? he ventures, â€œso we can be more available to people -- where they are and when they need us. Staffers who were formerly stamping books will be wandering the floors helping people on the spot, because if weâ€™re seen as inconvenient, if we donâ€™t provide service, you wonâ€™t come back.â€?

Service. Convenience. Reinvention. Now that sounds like a true entrepreneur talking. And it would seem that such spirit is exactly what public libraries need in order to survive in the most highly competitive marketplace theyâ€™ve ever faced. Reynolds recognizes the gravity of the situation, and appears to be bracing for the worst when he concludes, â€œThe role of the library is so fundamental to the survival of humanity that even if no one ever passed through our doors, it would still be important to keep the doors open, the lights on, the shelves and computers full of useful stuff, and the staff ready to help.â€? ?

#
STORYTIME Even one-year-old Dixon Smith knows the value of libraries.

#
PAST, PRESENT, FUTURE Regular Stu Baron takes time out to peruse the paper. 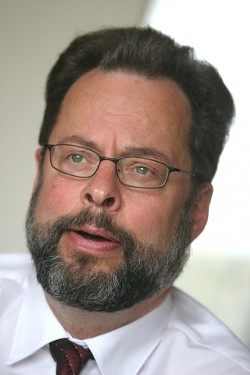 #
BRIAN REYNOLDS If we lose libraries, we lose our courtesy, civility and comity.

#
RICK LONDON In a world of mind candy and rollerball, the library may be our only hope.

King Harris would have a lot more time to read if he werenâ€™t Managing Editor of New Times. Add to his mail pile at kharris@newtimesslo.com. Staff Writer Karen Velie also contributed to this story.