A review of a revue

The revue had always struck me as being kind of … 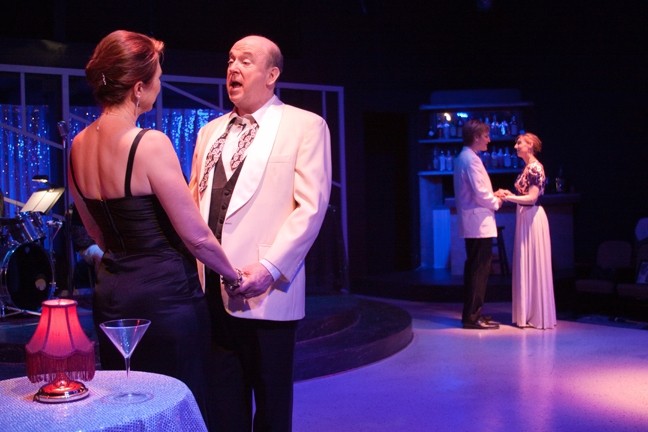 “I’m tired,” I once imagined the inventor of the revue saying. “Let’s skip all of that pesky business of dialogue and characters and a plot, and just sing some of our favorite songs.”

I was still marinating in this bias on a Friday night as I strolled into the San Luis Obispo Little Theatre, where the popular revue My Way: A Musical Tribute to Frank Sinatra plays through July 22. My Way, directed by Kevin Harris, stars four actors, each representing some aspect of Sinatra’s life. Ayrton Parham and Danielle Dutro are frequently seen as a young couple—Parham capturing the essence of a youthful Sinatra’s crooning, Big Band-era sound; Dutro playing the kind of woman Sinatra sang about: pretty, beguiling, glamorous. John Laird, embodying the older, Rat Pack-era Sinatra, is paired with Suzy Newman, whose throatier-sounding voice and worldly bearing match the older Sinatra’s classic cool.

A live band, under the musical direction of Steven Tosh, performs on an elevated portion of the stage, and the set has the look and feel of an upscale jazz club, with a full bar and several fancy tables-for-two. It’s here that these four performers, in various arrangements, bring to life the many moods evoked in Sinatra’s iconic songs.

Older Sinatra teaches his younger self the art of being suave with the ladies in “Can I Steal a Little Love?” We’re regaled with stories of Sinatra’s four marriages and scores of lovers, before Dutro and Parham launch into an irony-tinged rendition of “Love and Marriage,” heads bobbing to its campy, prudish singsong.

Leaning knowingly against the bar, Newman belts “I Get a Kick Out of You,” relishing the song’s cheekily undulating notes and references to cocaine.

(An aside on Newman: Where did she come from? Out of the blue she seemed to show up on the local theater scene and sort of nonchalantly go about the business of plumbing the depths of the human soul, whether doubling as a bereaved mother and a hoarse Janis Joplin in My Generation, or playing a schizophrenic housewife in The House of Blue Leaves.)

Of his approximately 1,300 recorded songs, a mere 56 are performed in My Way. These selections aren’t often sung in their entirety—instead grouped into medleys on themes such as love, summer, the moon, drinking, and favorite cities personified as classy, mysterious women. Even in abbreviated form, the bulk of the performance is song, with snippets of witty banter and Frank trivia used to engage the audience before segueing back into more singing.

As I had feared, the audience was soon encouraged to sing along. And it was then, talk-sing-mumbling my way through “New York, New York,” that I discovered the root of my prejudice toward the revue. It’s not that I’m “bad” at singing really, just that I’m physically unable to create musical sound with my vocal cords. So devoid of talent am I that I’d even begun to view its gaping absence as one would a missing limb, and, following this logic, imagined bitterly that singing ability comes to others as easily as having a left arm comes to me.

This reasoning is, of course, faulty. Singing for an extended period of time—and while carrying out other tasks, such as dancing and falling in love—is extremely challenging, and Parham, Dutro, Laird, and Newman achieve an enormous feat in this regard. There’s nothing easy about this. I take it all back!

The show’s musical selections are grouped not only by topic, but by era, gliding from giddy declarations of young love with “I Only Have Eyes For You” and “Something Stupid” to the warier tone of someone who’s been spurned a few times, with “(Love is) The Tender Trap” and “You’re Cheatin’ Yourself (If You’re Cheatin’ on Me).”

Here I must mention that, as is true of most tribute shows, My Way comes fully stocked with sappy moments. Be ready to witness many boy-meets-girl scenes; many beatific, smiling faces in freeze-frame as one actor gets uncomfortably serenaded; many song transitions marked by one performer shoving another playfully out of the spotlight, making a face at the audience like, “What a kidder, huh?” and taking over the mic.

But as tributes go, My Way is certainly at the more sophisticated end. To the show’s credit, none of its singer-actors attempts to truly “play” Sinatra—emulating his famous voice and mannerisms too closely—as this would surely have led to downfall and ruin. Instead, they seem to infuse Ol’ Blue Eyes’ signature style into their own, a far more natural choice.

As the evening wears on, Sinatra gets deep. The two younger actors begin the melancholic “A Very Good Year,” and then the older ones, poignantly, take over. Spying the end in the distance, Sinatra is defiantly optimistic. “The Best is Yet to Come,” he playfully declares, raising a glass. His tone turns resolute with “I’m Gonna Live ’Til I Die,” and the soaring, weathered anthem “That’s Life,” which sounds for all the world like a grand finale, a kiss goodbye. The only thing that can top it is that ending of endings, the song that everyone came to hear.

At once quiet and powerful, “My Way” is an elegant adieu. “And now, the end is near/ so I face the final curtain …” he softly begins. “I’ve lived a life that’s full/I’ve traveled each and ev’ry highway/But more, much more than this/ I did it my way.”

Tell Arts Editor Anna Weltner she’s on top of the heap at aweltner@newtimesslo.com.