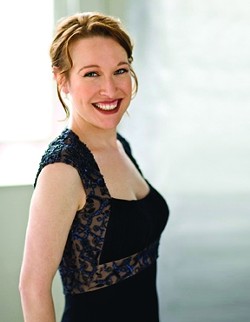 Saturday night’s SLO Symphony concert at the Cohan Center blended the familiar with the daring in a program that introduced our community to the music of Osvaldo Golijov and the artistry of soprano Ava Pine.

Both names turn out to be well worth getting to know. Born in 1960 in Argentina to an Eastern European Jewish family, Golijov has lived in Israel and now teaches at Holy Cross College in Massachusetts. His music, like his background, is also all over the map, yet rooted in European and Jewish traditions. He’s won a MacArthur “Genius” Fellowship and two Grammys, both for his opera Ainadamar, and he keeps getting commissions from the likes of Francis Ford Coppola, Yo-Yo Ma, and Dawn Upshaw. It was Upshaw for whom Golijov wrote “Three Songs for Soprano and Orchestra,” and DGG included her recording of it on a 2007 album of Golijov music (DGG B0009069-02), lovely and easily recommendable.

Like Mahler’s Das Lied von der Erde, Golijov’s “Three Songs” are orchestral settings of poems—in this case, one in Yiddish, one in Galician Spanish, and one in English. The newer work shares with the Mahler a sense of loss and longing (there’s even a Mahler quote in the third song). But Golijov is not interested in rewriting the classics. Parts of the piece evoke the rhythmic chug-chugging of Philip Glass and the lonely wastelands of Henryk Gorecki. The whole gains integrity from the elemental drama of the poems, which reference the sky, the moon, the wind, and the sea, and the ache of the eternal feminine. When the soprano voices Emily Dickinson’s “Is it too late to touch you, Dear?” she repeats “touch you” in a dying fall. Then bells ring, and a bassoon mourns, and you just never want the mood to end.

However, I was more moved by Ava Pine’s performance of this piece Saturday night than I am by Dawn Upshaw’s recording, strong and memorable though it may be. Pine’s voice was warm, full and clear, and she had the seraphic demeanor of a guardian angel. She also looked stunning, in a teal gown with sparkling rhinestones on the bodice, and read all three poems aloud in English, so we would know where the heart of the piece was going. Her voice suggested a recognition of the world’s frustrations and a yearning for transcendence.

The standing ovation was spontaneous and Pine thanked us for it with a lagniappe: Mozart’s “Ruhe Sanft,” an aria from Zaide. It showed how flexible an instrument Pine has, and how swiftly she can enter a musical character.

The second half of almost any concert that began this way would pretty much have to be an anticlimax, and the Brahms Serenade No. 1, well-played as it was, fell into that category. It’s the 27-year-old Brahms at his mellowest, a young man discovering his abilities as an orchestral composer and happy to let his melodies speak for themselves. The six movements add up to 45 minutes of Victorian contentment, and you wouldn’t want it to be a minute longer.

Maestro Nowak has superb Brahms credentials. Never an interventionist, he doesn’t rush tempi, but always maintains momentum without sacrificing color. I noticed details in the winds I had not noticed on my favorite recording. Alice McGonigal’s flute and Jennifer Galvan’s horn stood out.

But the evening belonged to Ava Pine and Osvaldo Golijov.

James Cushing is a teacher at Cal Poly and a past SLO County Poet Laureate. Send comments via Arts Editor Anna Weltner at aweltner@newtimesslo.com.