A salute to Chef Chris Kobayashi 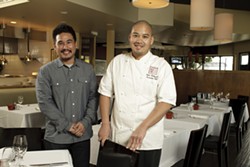 I started cooking professionally three decades ago when the preeminent chef James Beard (May 5, 1903–Jan. 21, 1985) inspired my decision to become a chef. Beard’s practical cookbooks made it easier for an aspiring chef to learn the intricacies of gourmet cooking. That’s why I’m proud to announce the nomination of a favorite Paso Robles chef, Chris Kobayashi at Artisan, as semi-finalist for “Best Chef: Pacific” by the prestigious James Beard Foundation (JBF).  Little did I realize until I called his partner and brother Mike Kobayashi that it was his second nomination from the foundation.

“Chris was first nominated in 2009, but that was during the first two years we were open and we were just getting our feet wet,” Mike remembered. “We didn’t understand the magnitude of it.”

Mike and his wife Tina oversee the dining room, and Chris’s wife Shandi is the wine expert. When JBF’s second nomination came this year, the Kobayashi family realized the significance. No sooner was it announced than people were crowding the dining room to say congratulations.

“The media hubs are San Francisco and L.A., for them to come here and find us—we’re humbled,” Mike admitted.

Mike noted that being on the list among such great restaurants as the L.A. hot spot Animal is an honor that’s nearly like winning. He added that Chris performs even better under pressure—a fact I’ve witnessed while judging him last spring when he earned the “2010 Ultimate Chef Competition.” Mike explained: “Chris is proud but humble. He doesn’t let anything go to his head. Many people don’t realize that it’s a science creating recipes, and a 24-hour job. Chris is constantly reading and staying informed to be on top of trends.”

Artisan celebrates its fifth anniversary in October and remains among the county’s most popular restaurants, especially among wine connoisseurs. The chef believes it’s because he and his cooks are performing at the top of their game.

“The team [of cooks] is so important. You’re only as good as your weakest link, and we’re firing on all cylinders,” Chris said earnestly.

He explained that people now applying for kitchen jobs take the profession more seriously than applicants did when he opened Artisan. Aspiring chefs are coming from across the country to ask him for work to become part of the team. Chris pointed out that his sous chef, Ben LaPier—formerly at Gramercy Tavern and Craft restaurants in New York City—shares his loves of the farm-to-table philosophy.

Artisan’s “Monday Night Suppers” feature menus that showcase outstanding local farms or ranches and wineries. The combinations are amazing: RN Estate and Windrose Farm; Adelaida Cellars and Central Coast Seafood; and L’Aventure and Rabbit Foot Farm. Chef Chris also participates in many local events, like the upcoming Earth Day Food and Wine Festival in April, and the Outstanding in the Field alfresco dining event at Rinconada Dairy in June. You can view Artisan’s calendar of food and wine events at artisanpasorobles.com.

Contrary to popular opinion, a JBF nomination is a feat that can’t be earned by padding the ballot box. No San Luis Obispo County chef had been nominated before Kobayashi. In Santa Barbara County, Bradley Ogden, chef/consultant at Root 246 in Santa Ynez, earned JBF’s “best chef of California” (no longer a category) when he opened Lark Creek Inn in 1989. He also earned “best new restaurant” in 2004 for opening his eponymous Las Vegas eatery.

Entry in the awards contest requires nominations by food professionals and food aficionados who are aren’t required to be JBF members. The foundation received a record 28,000 online entries this year. All of them were carefully reviewed by a national committee of professionals and JBF board members who evaluated and selected the 20 semi-finalists for each of 19 categories. The semi-finalists undergo a blind vote by 550 judges—a combination of journalists, JBF board members, and past winners who choose the five finalists in each category. Those finalists will be announced March 21 at a ceremony in Portland, Ore., which is Beard’s birthplace. On May 9, JBF will announce this year’s winners in the chef and restaurant categories at the JBF Awards Ceremony and Gala Reception in New York City.

Chris concluded: “Our food had changed a lot since we opened. It’s less about ingredients and more about making those ingredients we do use shine. Adding too much to a dish really dilutes it. I’m really happy that the team is so focused.”