A Scot's A Scot for A'That

Celebrate Robert Burns and Scotland with an evening of haggis, kilts, and whiskey

While there are many different recipes for what Robert Burns called the “great chieftain o’ the puddin-race,” the majority have the following ingredients in common: sheep’s heart, lungs, liver, onion, oatmeal, suet (raw beef or mutton fat), spices, and salt, all merrily boiled together in the sheep’s stomach. Wash your haggis down with a few shots of Scottish whisky and a liberal application of horseradish, at the advice of Central Coast Pipes and Drums pipe master Paul Dunn, and visions of kairns and crags won’t be far behind. 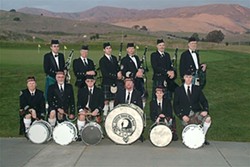 The dish is commonly consumed at Burns’ night suppers, traditionally held Jan. 25 on the anniversary of Burns’ birth. But the Central Coast Scottish Society is hosting their dinner on Jan. 24, at the Pavilion on the Lake in Atascadero. According to the group’s chieftain, Kristin Cameron, the Central Coast Scottish Society’s Burns’ supper has a format closely resembling those hosted in other corners of the world around the same time.

The evening commences with the Selkirk Grace, a prayer delivered in Lallans lowland Scottish. The four-line thanksgiving states, “Some hae meat and canna eat,/ And some wad eat that want it;/ But we hae meat, and we can eat,/ Sae let the Lord be thankit.” From there, the evening takes an odd turn, as the haggis is marched into the room, accompanied by the timeless clamor of the bagpipe. One of the guests then delivers a somewhat surreal speech to the dish (Burns’ “Address to a Haggis”) before plunging a knife into it. After these ritualistic ceremonies have been completed the guests are free to eat; those attending this particular celebration of Burns and all things Scottish might be relieved to know they have their choice of roast beef, salmon, or a vegetarian dish.

The guests then engage in a round of toasts, the loyal toast made to the health of the nation’s leader, an immortal memory tribute paid to Burns, a few words of appreciation delivered by the host to the speakers, and a toast to the lassies followed by a response from the lassies. At the evening’s conclusion those in attendance rise and join hands to sing what is now perhaps Burns’ most famous poem, “Auld Lang Syne.”

For the second year in a row the local Scottish society scored a major coup in booking Scottish singer and songwriter Jim Malcolm, voted songwriter of the year in the 2004 Scots Trad Music Awards. His performance constitutes the “immortal memory” tribute aspect of the supper, as he will perform poems originally written by Burns. Malcolm states in the introduction to his CD dedicated to Burns’ work that “perhaps the most important thing [Burns] left was his love for the tradition, hand in hand with his love for creativity. And so he has inspired generation upon generation of artists to blend the old and the new and make Scottish culture the envy of the world.” “Westlin Winds,” “A Man’s A Man for A’That,” “Parcel o Rogues,” “My Luve is Like a Red Red Rose,” “Highland Mary,” and “Auld Lang Syne” are among the Burns poems that Malcolm has recorded.

Central Coast Pipes and Drums, whose numbers generally hover around eight musicians, swelling to 14 on occasion, will also perform at the supper. According to Dunn, the hall’s high ceilings make for excellent bagpipe acoustics, and the call for formal Scottish attire ensures “wall to wall kilts” (Dunn’s description), which always makes for a good time— although Burns devotees wary of exposing white, white legs to all and sundry can opt for less traditionally Scottish attire.

“You don’t have to like haggis. And you don’t have to wear a kilt,” assured Cameron. Haggis, odes, kilts, and bagpipes aside, what the evening really boils down to is an opportunity to celebrate and explore Scottish culture through the pen of the ploughman poet. Burns’ empathy for the natural world, as revealed in works like “To a Mouse” and even his roguish tendency towards dalliances—a polite term given the lengthy list of his affairs and illegitimate children—bespeak a deep-seated appreciation of life, and his use of the Scots language in his poetry endear him to all who take pride in their Scottish heritage.

And if a one-night stand with the land and culture of Scotia isn’t to your liking, the Scottish Society engages in monthly bouts of revelry at the Crooked Kilt in Paso Robles and hosts a picnic featuring an abbreviated version of highland games, including a caber toss and claddagh dancers.

For those of you who have been scratching your head since New Year’s, and will likely continue to do so through the final chorus at the conclusion of the Burns supper, “auld lang syne” translates to times long past. Rabbie Burns was born 250 years ago, and died a mere 37 years later, but his ability to befuddle endures. ∆

Arts Editor Ashley Schwellenbach has run about the braes, and pu’d the gowans fine. Tell her you hae paidl’d I’ the burn at aschwellenbach@newtimesslo.com.