A search for the best!

Songwriters, musicians, performers, and bands, it’s once again your time to shine. The third annual New Times Music Awards is now accepting entries in five musical genre categories, a songwriting competition, and an album of the year competition. The genre winners must be available to perform during the Thursday, Oct. 13, live judging competition. Here’s the scoop.

Yours truly will be judging the Album of the Year contest, examining the entire presentation including the quality of the songs, sound, and packaging.

KCBX 90.1 FM’s Song Town host Sonnie Brown will judge the songwriting competition. For this category, in addition to the recorded song(s), submissions must include a lyrics sheet.

A panel of three judges will select the best in each genre, and all five first place winners must be available to perform on Thursday, Oct. 13. If your song places first in a genre category but you are not available to perform, you’ll be awarded second place and the runner up will receive first and play the event.

Why, you ask? Because this year we’re doing something different. Each first place finisher will compete against the others for Best Live Performance during the concert and awards ceremony. Another panel of celebrity music industry judges will determine the best live performer, whose Newtie Award will be specially customized.

All told, seven bronze Newtie Awards will be presented. These stunning awards are hand cast from Peace Bronze, metal reclaimed and recycled from decommissioned weapons systems. Second- and third-place finishers in the five genres, songwriting, and album categories will receive specially designed plaques.

Fill out the entry form on page 2 of this issue, or visit our website at newtimesslo.com to download an entry form. All submissions must be received no later than 5 p.m. on Monday, Sept. 5, in our offices at 1010 Marsh St. Good luck, and Godspeed! 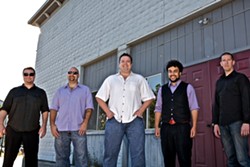 Rock act the Pat Jordan Band, an acoustic quartet, focuses on Jordan’s singer-songwriter roots to deliver what bassist Josh Barrett describes as
“a great sunny day, drinking on the porch type of vibe. We sing about love, life, and not sweating the small stuff.”

The group returns to Barrett’s old stomping grounds on Saturday, Aug. 6, for a show at Sweet Springs.

“I grew up in Los Osos,” Barrett said. “I used to play in a band called Shambhala. We did the Concerts in the Plaza and a lot of other great gigs in the area. I moved to the Bay Area seven years ago, and I haven’t come home to play since I moved, but I’m coming down with the Pat Jordan Band, which has been rockin’ the Bay Area for seven years! We’ve played just about everywhere there is to play in the Bay except the Fillmore. Still workin’ on that, but I digress.

“We’ve played the Great American Music Hall, Bimbo’s, and the Rockit Room, among others. We’ve opened for Third Eye Blind, Vanessa Carlton, Bob Schneider, and more. Pat is an amazing performer and a great singer! We have a range that includes everything from rocking to heart-wrenching to laughing your ass off, with such songs as ‘Shave Your Ass,’ ‘Boobies and Doobies,’ or the crowd favorite, ‘Heart On.’ It’s sure to be entertaining!”

I didn’t know they had it in ’em! I’m listening to the three-song EP by a new quartet of familiar players who call themselves The Mystery Trees, and they’re laying down some blistering roots rock, blues, and country.

Though I’ve seen and enjoyed the music of Dorian Michael, Kenny Blackwell, Paul Olguin, and Bill Severance separately and in various permutations, I never really thought of these cats as rockers, but here they are ripping through driving songs like Sonny Terry and Brownie McGhee’s “I’m a Burnt Child,” the English traditional “The Cuckoo,” and a rollicking instrumental version of Bill Chappell’s “Little Gypsy.”

These dudes are mashing up the sounds of Appalachia, the Deep South, rockabilly, and bluegrass, and finding obscure gems to cover—songs that were the predecessors of modern rock’n’roll. Maybe that’s why they call their sound “hillbilly blues power.”

The group will release its new CD, Abandon and Finesse, during a Sunday, Aug. 7, concert at the SLO Botanical Garden at 4 p.m.

Tickets are $20 for non-members and $15 for members. Visit slobg.org or call 541-1400, Ext. 301, to order yours today. Please note that SLO County Parks charges a $3 vehicle fee on weekends at El Chorro Regional Park.

Soul man Lenny Blue is the featured performer at Steve Key’s Songwriters at Play showcase on Thursday, Aug. 4, at The Porch (6:30 p.m.). “Singing and entertaining since a very early age, Lenny Blue is a California native who has traveled America to tap into the nitty-gritty of roots and Americana music,” said concert co-promoter Bonnie Nelson. “He credits living in New Orleans and Corpus Christi in the ’70s with giving him ‘a whole lotta soul from the many heartfelt songs of the South.’”

We Are the Willows, a folk-pop singer-songwriter Peter Michael Miller project, will perform a few local shows in support of his debut full-length, A Collection of Sounds and Something Like the Plague, and his newest release, Places, all in an effort to share his signature countertenor voice and simple finger-plucked guitar melodies. See him on Thursday, Aug. 4, at The Porch as part of Steve Key’s Songwriters at Play showcase (6:30 p.m.; all ages; pass-the-hat) and Friday, Aug. 5, at Kreuzberg. According to press materials, “With his newest release, Places, Miller attempts to capture moments in time, people and places, in a song. Miller writes of a trip to Santa Fe to visit his brother, or being late to his niece’s first birthday party in Hayward, or thinking of a friend in Somewhere, Virginia; experiences that commonly fade away and are forgotten beyond the reach of nostalgia. In capturing these moments, Miller saves away simple memories as something precious and significant.” 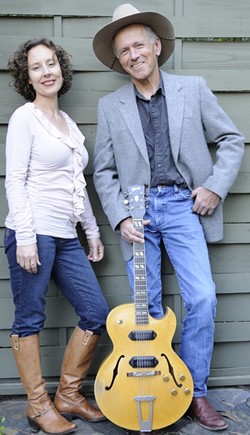 Fernwood Resort in Big Sur is an incredible spot, and it’ll be even more inviting when The BBC Trio (that’s Kenny Blackwell, Wall Barnick, and Jim Christie) offers a free, 9 p.m. concert on Friday, Aug. 5. In fact, this one has an added bonus! “My pals Kenny, Jim, and Scott Jeffreys are coming up to Big Sur and together we’ll suit up and play for the evening at Fernwood Resort, making this The BBC Trio plus one,” Wally said.

Painted Sky Studios presents “Legends of the Celtic Harp” on Saturday, Aug. 6. The concert promises “a musical journey into the heart of a legendary instrument.” Featuring three of the premier Celtic harpers in the world—Patrick Ball, Lisa Lynne, and Aryeh Frankfurter—expect a evening of myths, magic, and the fabled history of this captivating instrument. Tickets are $20, available at Cambria Business Center, The Yew Tree, or by calling 927-0500.

Castoro Cellars continues its Lazy Locals Free Outdoor Concert series on Sunday, Aug. 7, from 1 to 4 p.m. with the Brian Black Duo. You can kick back in the shade and enjoy their wide variety of acoustic music styles, and it’s free! Picnics are welcome, and wine is available for purchase. Bring chairs or a blanket to insure seating.

Another “Big Variety Night” rears its lovely head on Sunday, Aug. 7, at Linnaea’s Café. Ted Waterhouse has been hosting this little hootenanny off and on for some 20 years now. This invitational variety show features some of the county’s best acoustic acts. This week it’s Jody Mulgrew, Charles Duncan, Chick Tuesday, Wildwood, Ted Waterhouse and Ynana Rose of the Swingin’ Doors, Randall Lamb, Peter Yelda, and more. Best of all, this sucker is free!

Songwriters At Play will pay tribute to the music of John Prine, with a special concert Monday, Aug. 8, at The Spot (7 p.m.; $10 at the door). Seven local musicians will take on more than 20 Prine classics, such as “Hello In There,” “Paradise,” “In Spite of Ourselves,” “Dear Abby,” “Grandpa Was a Carpenter,” and “Your Flag Decal Won’t Get You Into Heaven Anymore.” The lineup includes Ted Waterhouse of the BlueSouls, Shannon Savage of That Evening Sun, Spanky Baldwin of Three-Legged Dawg, Morgan Enos, Caitlyn Vassaur, and Steve Key. 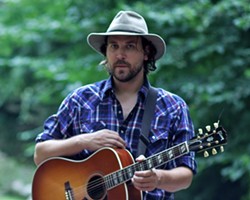 Philip Gibbs is currently touring in support of his fourth studio release, The Petroleum Age, bringing his rambling western show to Steve Key’s Songwriters at Play showcases on Sunday, Aug. 7, at Sculpterra (1 p.m.); on Tuesday, Aug. 9, at Kreuzberg (6:30 p.m.); and on Thursday, Aug. 11, at The Porch (6:30 p.m.).

You probably didn’t know it, but you are desperate for a double shot of Jackie, and if you head for the Henry Miller Library on Thursday, Aug. 11, that’s what you’ll get when Jackie Bristow and Jackie Daum play the rustic Big Sur venue. They both recorded their respective albums in Austin, they both look similarly lovely, and they do share a name.

The Cache Valley Drifters delivered an awesome set of contemporary bluegrass at this year’s Live Oak Music Festival, so I know they’ll be in good form when they play Thursday, Aug. 11, at Painted Sky Studios (8 p.m.; $20 tickets are available at Boo Boo’s, the Cambria Business Center, or by calling 927-8330) and Friday, Aug. 12, at Windsong House Concerts in Paso Robles (visit reverbnation.com/show/3727349). These guys are masters at interpreting non-bluegrass tunes in a bluegrass style, so you may hear songs by Paul Simon, Etta James, Cream, and more.