A search for the best!

Songwriters, musicians, performers, and bands, it’s once again your time to shine. The fourth annual New Times Music Awards is now accepting entries in five musical genre categories, a songwriting competition, and an album of the year competition. The genre winners must be available to perform during the Thursday, Sept. 6, live judging competition. Here’s the scoop. 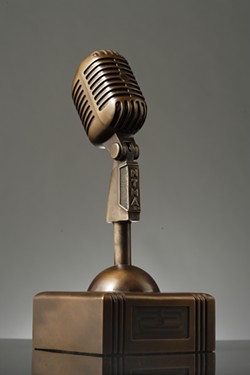 Album of the Year entries will be assessed based on the entire presentation, including the quality of the songs, sound, and packaging.

Judging for the songwriting category will focus on the lyrics and melodies, though a quality performance certainly can be persuasive. For this category, in addition to the recorded song(s), submissions must include a lyrics sheet.

Why, you ask? Because each first-place genre finisher will compete against the others for Best Live Performance during the concert and awards ceremony. A panel of celebrity music industry judges will determine the best live performer, whose Newtie Award will be specially customized.

All told, seven bronze Newties Awards will be presented. These stunning awards are hand-cast from Peace Bronze, metal reclaimed and recycled from decommissioned weapons systems. Second- and third-place finishers in the five genres, songwriting, and album categories will receive specially designed plaques.

You will find an entry form on page 7 of this issue, or visit our website at newtimesslo.com to download an entry form. All submissions must be received no later than 5 p.m. on Monday, July 30, in our offices at 1010 Marsh St. Good luck and Godspeed!

The voice of Yes

Whether he’s singing “Owner of a Lonely Heart” to a 40,000-seat stadium or “Big Buddha Song” off his newest solo album Survival & Other Stories to an audience of 500 lucky souls at a winery, there’s no mistaking Jon Anderson’s voice. It’s the voice that propelled Yes to superstardom, and Anderson’s impressionistic and mystically themed lyrics are behind his band’s biggest hits. 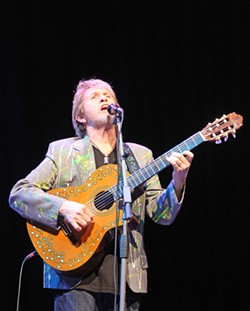 Anderson still crisscrosses the globe, playing music for audiences big and small, but for the past decade, he’s called SLO County home, always returning to his house just south of Arroyo Grande. He discovered the area years ago because his wife Jane’s sister lives here.

“On a visit, I remember seeing a police car trying to push an old Volkswagen hippie van that had stalled, and I thought, I want to live in a place like this. It has good energy,” Anderson said during a recent phone interview.

In 1997, when Yes reformed after a 10-year hiatus to record the album Keys to Ascension, he recorded it here, in what is now Heritage Oaks Bank on the corner of Marsh and Santa Rosa streets. For the past eight years, he’s concentrated on performing intimate solo shows.

“I’ve been traveling the world doing these solo acoustic shows where I’ll perform pockets of Yes and Vangelis songs, new songs which have been very well received, and in between telling stories about my life, my crazy, wonderful life I have lived and am living. It’s sort of like theater for me, and I really enjoy sharing this music and these memories.”

Surprisingly, Anderson doesn’t tire of performing his old hits: “No, no, no! I wrote those songs on guitar or piano, and I love singing them as I wrote them before bringing them to the group. These songs are my life’s work, and I sing the songs I love singing, and happily, audiences love it.”

Anderson’s lyrics can have a mysterious quality—some are easy to make sense of, yet others are like an impressionist painting: You have to stand at a distance and take it all in. Take, for instance, “Big Buddha Song,” that says, “Take away the ones that break the big expansion. They running out of time to change the course. They be cutting down the children to forget you. They be dancing on the ones that use the force. They be dancing on the mercies of the force. This is your life. You are the light. This is your time. This is your time.”

“A lot of it is sort of spontaneous,” Anderson explained of his lyrics. “I sing ideas when writing a song; I sing my thoughts very spontaneously. Then I sit there and think, ‘Well, that’s kind of cool.’ There are times when you want to say something very specific and times when you don’t want to spell it out. People know everything anyway, and there are enough poets saying stuff about politics and the world and the way the worlds is. People enjoy lyrics that don’t mean things all the time.”

Recurring themes include environmentalism, pacifism, and sun worship. Why are these things most important to Anderson?

“Well, whichever way we look at it, the world changes and we should change with it. We should help to cultivate love of mother Earth and the beautiful animals rather than slowly trying to destroy it for consumption and greed, and the sun is so powerful and can save us on so many levels. The house Jane and I live in is solar powered, and it’s beautiful to know the sun is all powerful.”

When talking to Anderson, what comes across clearly is his thoughtful, honest openness. He’s a man at peace, a man who has nothing to prove, and a man whose only goal in life is to live well and spread his message to encourage others to live well. He certainly doesn’t miss the hoopla of rock stardom.

“When touring, it's just me and my wife Jane. We’re in love, happy, and have been together 20 years. And I love what I do. My dad was a performer, so it’s in my genes to entertain. The idea of playing in front of 500 or 5,000 doesn’t make any difference. I was just down in Mexico in  front of 5,000, was in Brazil in September in front of a huge crowd, and last night I was in a small theater in front of 500, but whether it’s a small theater or club, I know people are there to enjoy themselves, and I want to give them a great show. I’m happy, healthy, and in love with life. I have three talented and happy children. Life is good, so good!”

When he’s not traveling doing his solo show, Anderson has been performing with orchestras around the world.

“This year I was in Chile, Bratislava, and at the Olympics in London with the Slovakian Chamber Orchestra, and also with youth orchestras around the globe whenever I can. It’s just important to be able to work with young musicians,” finished Jon Anderson, who plays Castoro Cellars on Saturday, June 30, with opening act A.J. Croce. Tickets ($35 to $50) are available online at castorocellars.com/events.php. Don’t miss what promises to be a life-affirming concert!

Kick off your weekend early on Thursday, June 28, with the return of the B-Side Players at SLO Brew (8 p.m.; all ages; $10 presale or $12 at the door), with Stranger opening. B-Side’s been around since 1994, delivering Latin global funk featuring a 10-man band with percussion, horns, keyboard, and guitars. Their socially conscious lyrics and butt-shaking grooves ignite dance floors wherever they play. Stranger blends reggae, rock, and jazz with positive lyrics.

Don’t be embarrassed about being excited to see Glam Cobra! Who wouldn’t want to see Zakk Magnum, Rikki Styles, Nikki Faith, and Troy Thunders deliver a heapin’ helpin’ of music from the most awesome generation? They’ve dived headlong into the neon-festooned, leopard-print heyday of ’80s glam rock. Dig deep into your closet and get out your finest ’80s gear and come to the Saturday, June 30, concert for free (8 p.m.; 21-and-older; non-’80s dressers pay $5).

Finally, SLO Brew closes out its week with Mates of State on Tuesday, July 3 (8 p.m.; all ages; $14 presale or $16 at the door). The organ and drums duo featuring Kori Gardner and Jason Hammel delivers feel-good anthems so infectious you’ll be singing the choruses. Prepare to have some sugary sweet songs happily stuck in your head.

The Alice Wallace Band headlines Steve Key’s Songwriters at Play showcase on Sunday, July 1, at Sculpterra (1 p.m.; all ages; tips appreciated). According to press materials, “After moving to the Los Angeles area three years ago from her lifelong home in Florida, Alice Wallace threw herself into the performing circuit—steadily attracting larger audiences and landing opening spots with well-known artists like Lisa Loeb, Shawn Mullins, Sophie B. Hawkins, and Al Stewart. Now she’s touring with her first full-length studio album, Sweet Madness. Her style falls somewhere between the alt-country crooning of Emmylou Harris and the bluesy timbre of Bonnie Raitt.”

On Tuesday, July 3, the showcase continues when Blue Cactus Choir plays Kreuzberg (6:30 p.m.; all ages; tips appreciated). Blue Cactus Choir is a duo featuring Marty Atkinson and Katy Boyd. Atkinson’s former band—Cactus Choir—“had a tangled, but passionate, affair with the major labels (10 years signed to Atlantic Records, EMI & then Curb/Universal),” according to press materials. “Katy Boyd has recently been compared to Tom Waits, Janis Ian, and Townes Van Zandt. She’s a witty, charming singer songwriter making a name for herself on both sides of the Atlantic. He is a bluegrass picker who left his banjo in Mexico. This is southwestern rambles, lonesome love songs, spicy single mothers … all delivered with a dash of Crosby, Stills and Nashville.”

Father-daughter duo Ranchers for Peace is hot and getting hotter. Their song “Walking Around Black,” which was written in response to the Trayvon Martin shooting, was chosen by the publishers of Sing Out! magazine to be included on the compilation CD that accompanies their upcoming issue. They also just released Tell All the World, a seven-song EP that includes “Walking Around Black,” which is available at Boo Boo Records. Next up is another EP planned for fall, followed by a tour of the U.K. and Ireland. See them on Friday, June 29, at 8 p.m. in Painted Sky Studios’ new digs in Harmony. Call 927-8330 for tickets.

Get your inner patriot dancing on Saturday, June 30, during the fifth annual Firecracker Boogie with Dr. Danger, Code Blues, Stony Hunter & The Rockhounds, and Formal Proof playing Biddle Park beginning at noon. It’ll cost you $3 to park your car, so carpool; bring some extra dough for the Hamburger Bar presented by Pirate BBQ; and since this is a fundraiser for Woods Humane Society, bring some money to donate to the cause. America, we salute you!

Los Angeles-based singer-songwriter Steven Roth plays Frog and Peach on Tuesday, July 3, in support of his debut album Let It In. A former member of the rock band Redstone Hall, Roth decided to go solo and headed to Nashville to work with producer Dave Cobb and Grammy-nominated mixer Leslie Chew. Roth’s bio describes the result as “pop-rock soul filled with melody, mood, energy, and honesty.”