A shot in the dark: After Dark Bingo at the Chumash

Formerly known as Cosmic Bingo, After Dark Bingo at the Chumash Casino Resort in Santa Ynez is a colorful combination of lights, music, and good old-fashioned machine-automated bingo. Set in a large auditorium filled with rows of tables and glow-stick bearing bingo players ready to try their luck, the game is played on a sort of bulky tablet that I retrieve from a small room near the entrance and bring with me to my seat on the evening of Saturday, Jan. 28. A $24 buy-in gets me the use of the machine with eight regular games that pay $250, plus eight different kinds of specials that pay $150 to $200. Players also have the option of buying additional paper bingo cards-—which glow under black lights in the room. If you plan on using the paper cards, you’ll also want to buy a dauber when you pay for the initial buy-in. It glows, too. 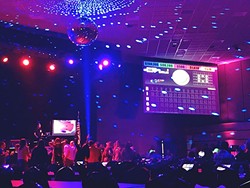 Situated on a stage at the front of the room, a caller sits behind a podium with light-up panels, flanked on one side by a DJ named Orlando and on the other by another person with a light-up podium whose function is not as clear, but presumably equally important. On either side of the room, a giant screen showing which numbers have been called hangs from the ceiling, and a large disco ball spins over a dance floor at the foot of the stage. There is also a small bar on the right side of stage, which also has lights on it.

If you opt for only the machine you basically just sit back and watch while it does all the work for you, keeping track of which numbers are called and marking them on the screen automatically. All you have to do is yell “Bingo!” if you win. This is convenient on the one hand, and could potentially prevent you from missing out on a bingo, but it also removes what little effort bingo requires. Having multiple cards and trying to keep up with the numbers being called as you mark them makes it a more participatory experience, so I choose to buy a couple of paper cards in addition to the machine.

Along with the normal bingo games, there are multiple party games requiring audience participation interspersed throughout the evening, such as a dance off and one involving balloons. I was wondering why they asked for my name when I paid for my machine, and apparently, it’s so they could randomly choose names of people to participate, though I am fully prepared to simply ignore them should my name be called for the dance off. Your fancy lights may have suckered me into playing a game typically reserved for octogenarians, but I shall not dance for you.

At one point in the evening, someone in the bleachers toward the back of the room gets a bingo, but can’t find the receipt they were given when they paid their way in, and is therefore denied that bingo by the light-up podium people. I’m hoping there is a legitimate reason for this that I’m just unaware of because on its face, it would seem to defy logic. The place where you pay for your games is literally connected to the room that the bingo is played in, and they input your name into their system, so it seems like it would be pretty easy to find a record of it. On the other hand, it’s also pretty easy to just put the receipt in your pocket.

Though I did manage to keep my receipt, neither I nor the bingo robot are triumphant at After Dark Bingo. If you want to give it shot, the next one is Feb. 18 at 8 p.m.

Calendar Editor Trever Dias is out $24 and some change, but can be reached at tdias@newtimesslo.com.