Giuseppe “Joe” DiFronzo was born in the wrong era.

He loves zipping around town on his fleet of vintage scooters and is obsessed with making pasta the old fashioned way (just like grandma). Most of all, the chef and restaurateur loves working with his hands, tilling the soil, and harvesting broccoli di rapini, heirloom tomatoes, and syrah wine grapes on his San Luis Obispo farm. DiFronzo’s greatest joy lies in bringing these Old World flavors to his iconic Giuseppe’s restaurants. Here, garlic is always in the air and the Southern Italian dishes of his childhood live on forever. 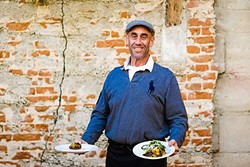 “I watched it lie vacant for about eight years. Still, I always thought this place was always meant to be a lovely Italian restaurant,” DiFronzo says.

Lovely it is. The space features outrageously high, gleaming silver ceilings, a fresh, wide bar for noshing and swilling fine wine, and modern fireplaces that invite diners to linger just a little longer.

Still, the eatery radiates with a gritty, old timey character—after all, this is the Sinsheimer Bros. Building, the subject of countless black and white photos nestled within the files at SLO’s Historical Society. From the scarred, centuries-old brick to an ancient vault that harkens back to SLO’s lawless cowboy days, there’s history here you cannot fake. I soon learn that if there’s one thing DiFronzo values most—both in food and in life—it is authenticity.

“The place was a mercantile from the late 1800s. You could come here and get Levi’s and beans and dynamite,” DiFronzo says, pointing at the old dynamite shop near the restaurant’s courtyard, which now glows with strings of enchanting twinkle lights. “You’d hitch and water your horse over there.” 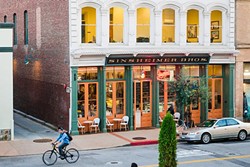 You may already know that Giuseppe’s famed original Pismo Beach location was just as historic (as the chef likes to remind folks, Eleanor Roosevelt, Clark Gable, and Bob Hope all stopped by the joint). As the well worn story goes, DiFronzo started that first restaurant in 1988 after developing the business plan for his Cal Poly senior project, then spent the next 28 years working to further that dream. His first San Luis Obispo location, Palazzo Giuseppe, opened to great popularity in 2005. Yes—a fire gutted much of his first iconic Pismo Beach locale this past summer, but DiFronzo remains adamant that the doors won’t be shuttered forever. Currently, the Pismo Beach restaurant is under construction while an express deli remains open to the public.

“After my fire in Pismo, hundreds of people have written me letters; the president of Cal Poly, customers from France,” the chef says. “These are memories that they have created there over the past 30 years.”

Of course, the restaurateur has plenty of work to tend to. These days, he’s at the new SLO location 24/7, interfacing with friends new and old. What keeps the chef grounded? Sane? Just putter down the stairs to the basement below the restaurant. Here, you’ll find wines of great distinction, including his own DiFronzo Vineyard brand wines, grown on his San Luis Obispo farm.

It’s a real ranch—in case you were wondering. The land offers up a dozen acres of heirloom delights, including figs, olives, San Marzano tomatoes, squash, Hachiya persimmons, Meyer lemons and five grape varieties. Nearly all of these goodies—and many more—make their way onto DiFronzo’s plates.

“When you try my tomato sauces, they’re truly grown from my home,” DiFronzo adds.

When I ask the chef why he thinks his food has become a mainstay for the Central Coast, he is humble and thankful: “I never sought out to prove anything; I just wanted to satisfy my own standards of what real Italian food is, from where my family is from, the Pugliese region of Italy.”

As a kid, DiFronzo spent time with family in the seaport town of Bari, where daily activities included canning tomatoes, curing olives, and making wine. It was a true “farm-to-table” existence before the term even existed.

Back then, the chef’s family grew all of the goodies they couldn’t procure in America at the time: fava beans, baby artichoke hearts, arugula. These are exactly the foods you’ll find on Giuseppe’s menu, when seasonally available.

“It’s all about fresh, fresh sauce, pastas, local seafood, keeping it simple, keeping it real. I’m not wanting to over-chef anything. I’m refocusing the menu to what I grew up with and ate; what was my favorite. I want the ingredients to speak for themselves,” DiFronzo says.

I would say these ingredients speak to more than a feeling of Old World authenticity. For many locals, the name “Giuseppe” is synonymous with a wedding proposal; a big, boisterous family reunion; or a cozy booth in the corner where good times were had during a weekly dinner date.

“When I started this all out as my senior project at 24 years old, I had no idea. I was a little boy. Now, boom, here. I’m an old man,” the chef says with a laugh.

Time has a way of sneaking up on us all, doesn’t it? But for this historic building and a guy who created a culture of Central Coast Italian dining, the most interesting years are always ahead, not behind.

“I’m grateful for the opportunity to take an iconic location and preserve it. I cant tell you how many people come in—we get 600 to 700 people every day for my express, my restaurant—and they are so excited to have this building open again,” DiFronzo says. “People can come here and they break bread. They make memories.”

Hayley Thomas Cain can never get enough homemade pasta. Never! She can be reached at hthomas@newtimesslo.com.