It's not all that unusual for teenagers to be politically inactive, and to this San Luis Obispo High School junior, the looming threat of the world's end wasn't all that fun to think about. But with the growing prominence of Swedish environmental activist Greta Thunberg and her worldwide student climate strike, the issue became increasingly difficult for Brussell to ignore. 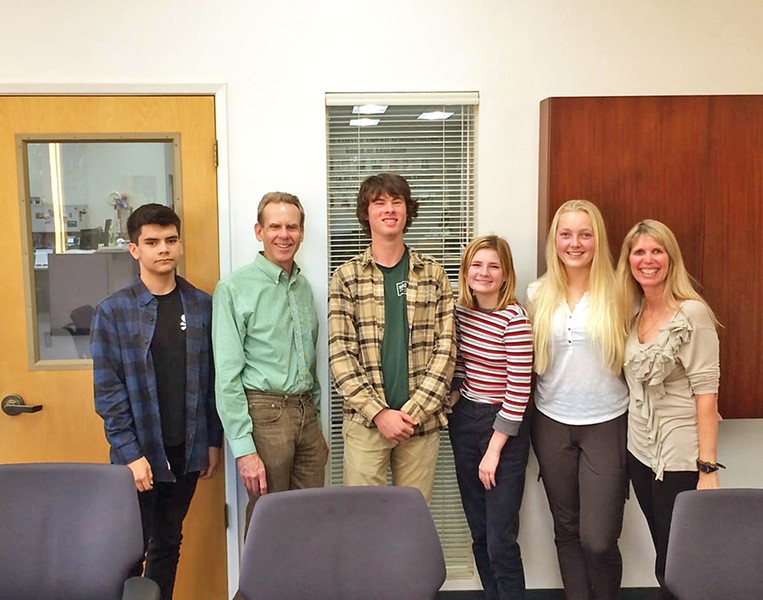 The more he researched the environment and all the ways it's changing, mostly for the worse, the more he started to feel like the federal government isn't doing enough to address the dire situation. Brussell decided he could do more, too. He got involved in some of the environmental groups at his school and participated in the September 2019 student climate strike.

That's where he made the connections that would come to define the next few months of his extracurricular activities. He met a small group of other like-minded SLO High students, and they decided to start their own club centered on taking real-life political action in an effort to stop climate change.

Though the club itself isn't official yet and is still making its way through SLO High's approval process, Brussell and his fellow students are already making waves and working to get the word out. When it comes to this issue, there's really no time to waste, he said.

"We need to get to the polls and vote in pro-climate change [reality] officials," Brussell told New Times.

And before that happens, the current generation of teenagers needs to be made more aware of the urgency of the world's environmental situation. The best way to do that, he said, is to ensure that teachers and schools are doing everything they can to promote a culture of sustainability.

Brussell and a group of three other SLO High students took a step toward making sure that culture is developed locally on Feb. 18 at a San Luis Coastal Unified School District board of education meeting. There, the students presented an extensive list of recommended ways to make the district and its operations more environmentally friendly, the first of which includes establishing a sustainability advisory committee comprised of students, teachers, and parents who would plan out, encourage, and implement sustainability practices district-wide.

The San Luis Coastal board of education unanimously voted to form such a committee after more than a dozen students and community members spoke in favor of the recommendations.

"Climate change is real, guys," SLO High School student Landis Blakeslee said at the meeting. "We're seeing fires in California and throughout Australia. Sea levels are rising, which will affect Morro Bay and Morro Bay High. So we need to do all we can."

Blakeslee is one of the students who helped put together the recommended actions, all of which students say would help the district achieve three main goals: reducing the district's environmental impacts, preparing students for a changing climate through education, and the creation of a sustainability action plan that would provide a holistic approach to climate action.

At the meeting, students acknowledged, as district officials pointed out, that San Luis Coastal has already made big strides toward reducing its negative impacts on the environment. In June 2018, the San Luis Coastal Unified School District passed a Climate Change Resolution ensuring the district's continued efforts to reduce energy use and waste.

Assistant Superintendent of Business and Support Services Ryan Pinkerton said at the Feb. 18 meeting that since then, solar panels have been installed at several schools, Roundup weed killer use has been discontinued, LED lights have been installed at every site, and school lunches are becoming increasingly plant-based. There's still room to improve, Pinkerton said, especially in the district's waste and recycling habits, but gains are being made.

Students agree, but Ashley Thorshov, a junior at SLO High, said they want to keep the pressure on. The sustainability advisory committee will help keep the district moving in the right direction at as fast a pace as possible.

"The future that my generation is going to face is very unclear," Thorshov told board members at the meeting. "Scientists have predicted that we only have about 10 years before humanity's effects on our environment become irreversible, and we as students are looking to schools to help prepare us for our future."

After board members approved the formation of the sustainability committee, Thorshov and other involved students, including Brussell, Blakeslee, and Damian Gutierrez, celebrated the win outside the Los Osos Middle School Library. The students beamed as community and board members congratulated them and complimented their efforts.

"Great job!" one passerby told the students with a pat on the back. "Inspirational!"

Thorshov wasn't politically involved and hadn't heard much about climate change until she read an extensive article detailing the urgency of the situation. It was, and still is, overwhelming to think about. That's why Throshov hopes to be on the sustainability committee, so she can help people get past the fear and denial.

"I think it's all in the small steps," she told New Times.

"If 7.5 billion people are taking small steps," she said, it makes a big difference.

As Thorshov and her fellow students talked with community members after the Feb. 18 meeting, Jennifer Bauer looked on proudly. These students didn't get all the way here entirely alone.

Bauer is a second grade teacher at C.L. Smith Elementary School, a parent of two young adults, and vice chair of the Sierra Club. After attending a recent climate reality training led by former Vice President Al Gore, Bauer said an idea suddenly came to her: "We need a sustainability plan in our district."

So she rallied a few especially passionate students at the local climate strike and they rolled up their sleeves. Bauer said she's loved watching the kids work on this project. Not only did they learn about the environment and solutions to climate change, they learned how to navigate the waters of bureaucracy and government. Better yet, they were successful.

"This is going to make a huge impact for years to come," Bauer said. "When you educate our children, that's going to save our world." Δ