A smattering of applause

Attending the Santa Barbara International Film Festival’s opening weekend with the intention of generating some sort of conclusive report is a fool’s errand at best. There are simply too many films to see in four days—not counting the panels and parties and tribute events honoring Viola Davis and Christopher Plummer. So I didn’t try to see it all. Instead, like many at the festival, I made a rigorous viewing schedule for myself, then proceeded to meander over to whatever looked interesting, face slack, eyes glazed over. Of the selections that I, in a festivalgoer’s trance, happened to wander into, here are the ones that made an impression.

The world premiere of director Lawrence Kasdan’s Darling Companion was a sweet, if relentlessly generic, way to kick off the festival’s 27th year. Beth (Diane Keaton) and her husband Joseph, a doctor (played by Kevin Kline), are a bored, easily irritated couple living in Denver, Colo. Their two daughters have left the nest; one is married with a child of her own. But after Beth and daughter Grace (Mad Men’s Elizabeth Moss) rescue an adorable lost dog from the side of a freeway, things change. Much to the chagrin of the serious, self-absorbed Joseph, Beth adopts the dog—whom she christens Freeway—and the two form a very special bond. Grace falls for Freeway’s handsome veterinarian Sam (the charming Jay Ali), and, next thing we know, they’re getting married up at the family’s vacation home in the Rockies. But after the bride and groom have left on their honeymoon, Joseph does the unthinkable: He loses the dog.

From the start, it’s clear that Darling Companion will be a hopelessly friendly film, the kind where nothing gets broken that can’t be fixed, and so, at Freeway’s disappearance, we experience none of the fear and uncertainty of the characters onscreen. Instead, we observe in a detached, bemused fashion as Joseph and Beth work out their “issues.” We hardly bother to worry when the couple gets lost in the woods in a storm, or when Russell and Bryan, in a requisite bonding scene, find themselves in a tussle with a scary redneck neighbor. We look on, mildly entertained, as dopey Brian seeks the affections of sexy, ambiguously foreign Carmen.

And for the most part, these characters are highly sympathetic. Keaton’s Beth is charming, if overly sentimental. Kline is dryly witty. But every so often they’ll pull something that just seems such an unacceptably middle-aged, entitled, neurotic-white-person-from-Denver thing to do, such as, after the aforementioned storm, breaking in to a stranger’s empty home, donning that stranger’s bathrobes, and helping themselves to the wine cellar, clearly thinking, “We’ve earned it after such a hard day!” Or when Joseph fakes a medical emergency on a plane, forcing the pilot to turn around and call an ambulance, apparently unfazed by how many people he has inconvenienced in the all-important dog quest.

We can watch all this without getting terribly involved. We know, without help from any gypsy clairvoyant, that everything will be put right in the end, that once every subplot has been satisfactorily played out, the dog will come bounding joyfully back. 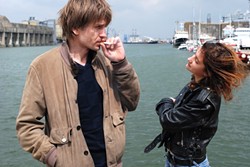 Part of the joy of Iris in Bloom, a lovely French feature written and directed by Valérie Mréjen and Bertrand Schefer, is that the film couldn’t possibly work in the United States. America’s teens, in the movies anyway, are catty, immature, preening, spoiled, and brightly colored. But French teenagers, at least those depicted in Iris in Bloom, seem to be miniature 30-year-olds: swilling wine introspectively, philosophizing, feeling jaded, discussing their book collections, and, in the case of 16-year-old Iris (Lola Créton), having an affair with a 40-year-old Parisian photographer named Jean (Stanislas Merhar).

And yet, despite their mature manner, the teenagers of Iris in Bloom appear—by contrast to the 20-something actors of Glee and Gossip Girl—to actually be in their teens: lanky of build, with innocent, soft cheeks and endearingly imperfect teeth.

But to me, the film’s true charm,

and another reason why Iris in Bloom

will probably never catch on stateside,

is the enigmatically French way in

which questions are consistently allowed to be deflected.

“I don’t like questions. The feel like little attacks,” Iris sighs to Jean when he inquires about her personal life.

When Iris asks a friend, whose name is never given (but whom the credits refer to simply as l’ami confident) how his books are ordered, he answers soberly, “There is no order. I reject all forms of order.”

When she continues, “How do you find them?” he says, “I don’t find them. They find me.”

Like Iris, whom he adores, l’ami confident (played by Barthélémy Guillamard) proves a master of deflection. When explaining why he has chosen to spend his holiday in the wine country, and not the seaside, he shrugs that “Beaches bore me, but I am interested in intoxication.”

Iris, l’ami, Isabelle, and Alexandre are strange teenagers, but teenagers they still are, despite their listless, vague eloquence: When Jean asks Iris, “What is your biggest flaw?” she responds, barely pausing to think, “Mes parents.”

A kindly snow golem, searching for pears, is attacked by a pack of angry fire wolves. This is the very odd beginning of the animated short Thank You, directed by Pendleton Ward and Tom Herpich. However, in the world of snow golems and fire wolves, the clash of mortal enemies is an everyday occurrence. But this time, amid the ensuing haze of smoke and steam, the golem’s aggressors accidentally leave a helpless little fire wolf pup behind in their retreat.

The golem cannot help but care for the little creature—even though the pup’s very being destroys everything the golem needs to survive. It’s a sweet tale, if surprisingly dark, and one of the most strikingly original, comic, and compelling uses of 11 minutes. 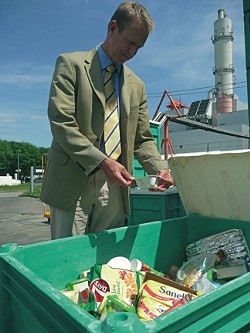 Waste—of food, time, money, energy, etc.—seems to be a concern weighing very heavily on the German heart. It’s no surprise that a German filmmaker would tackle the topic of global food waste. What surprises the viewer about director Valentin Thurn’s Taste the Waste is how very compelling, immediate, and universal the subject quickly becomes. Taste the Waste digs deep into a problem that affects us all, exposes its ugly causes, and, without lingering on them, shows what people around the globe are doing about it. Yes, there are gut-wrenching shots of perfectly good meat and produce sent to the Dumpster, and of trucks piled high with unsold bread bound for a landfill. But Thurn is less interested in punishing such food crimes as he is in seeking out their solutions. From Japanese food recyclers to scrappy Austrian Dumpster divers to the rooftop gardeners and urban beekeepers of America, his lens is trained on the food rebels who may save us all.

An Oversimplification of Her Beauty

There are many films that enter us through ordinary, well-worn channels. Then there are some films for which an entrance point has not yet been made, films that must force themselves in through whatever means possible, films that, quite literally, rip you a new one. Some viewers find this extremely uncomfortable. This is perhaps why, at a recent screening of the art-heavy, highly experimental feature An Oversimplification of Her Beauty, a film that just recently premiered at Sundance, approximately half the audience walked out of the theater over the course of its 93-minute run.

They didn’t get it, because Oversimplification is the sort of movie that’s doomed not to be gotten, not least of all because its title is unbearably tender and contains a seven-syllable word. (Even the festival employee, calling into a megaphone, “An Oversimplification of Her Beauty!”  had a look on his face like he was trying to hold the words at some remove from himself.)

It’s a film with much heart and—on the surface, anyway—very little plot. But there is a narrative, and it goes like this: A young man, preparing to entertain a young lady at his home, receives a call from her, in which she imparts that she will not be joining him that evening. Pondering the reasons why, he creates a short film called How Would You Feel?, which is basically a reenactment of the events I have just described, culminating with that phone call, at which point the frame freezes and a deep-voiced narrator asks, “Now, given the circumstances, how would you feel?”

The young man is Terence Nance, the film’s director. The young lady is visual artist Namik Minter, the film’s collaborator and the reason for its existence.

How Would You Feel? interrupts our feature presentation over and over. Someone presses “pause” and “eject,” and we are back in the short film’s frustrating, ever-widening loop. Each time it’s played, we discover more backstory about our hero, Terence, and his lady friend, Namik: They are friends teetering on the brink of something more. They’ve cuddled in bed, but haven’t crossed that line, kisses occurring “seldom, but with intention.” Recently, Namik has informed Terence that she is in an “exclusive romantic relationship” with someone else.

But between these increasingly explanatory interruptions, we are left adrift in the hallucinatory ether that is Terence’s mind. His thoughts, memories, and fantasies (for there is very little differentiation between these three) are illustrated with vibrant, gorgeous animations, which get tangled up in Terence’s jagged poetry, before running aground of actual footage of Terence and Namik.

As a narrative feature, the film is well beyond jumbled. As a documentary, it is damningly one-sided. But try not to view it that way. Try to think of Oversimplification as the achingly honest, visually stupefying, often surprisingly funny mind-collage that it is.