The owner of the escaped python was evicted over the incident 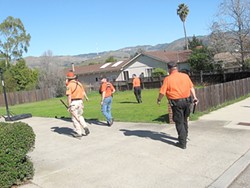 It’s been a tough five weeks for Brandon Dennis. First, his 23-foot-long, 130-pound reticulated orange python fled his home. Now, as a direct result of the media attention the escape drew, it is Dennis and his roommates who are in flight.

Dennis received an eviction notice just days after SLO police, county sheriff’s deputies and county Animal Services workers swarmed the neighborhood, with media in tow, in search of the missing Clarice as well as another smaller python, which was quickly located.

They found the big snake hours later a few houses away; it was partly tucked under a pile of logs. But that was long enough for Clarice’s short escape to make international news. Even USA Today did a story. Dennis said he received calls from people he knew all over the nation.

Apart from the simple thought of the massive escaped snake, media interest was stoked further by a SLO Police Department press release that warned that the snake was large enough to devour pets and small children.

Not all publicity, it turns out, is good publicity.

Dennis said he had told the representative of the company that manages his rental that he had snakes and reptiles as pets, but he definitely hadn’t gone into such details as which type, and how large they were.

“I was pretty vague about it,” he allowed.

Neighbors, he said, called the property management company to complain. “They were worried for their children’s safety.”

The property manager wasn’t sympathetic, he said. “‘You didn’t keep it on the down low,’” Dennis said he was told.

A representative for the property management company, Central Coast Management Group, said he wasn’t allowed to discuss the matter, adding only: “We didn’t know it was going to be like that there.” 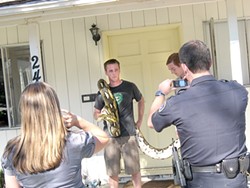 The whole day had a bit of a surreal feel to it, Dennis said, as police and emergency workers took turns getting their pictures taken with Clarice. Still, even with the good vibes, he had a sense even on that day that the fallout wouldn’t be good. So he wasn’t surprised when the eviction notice came, but he was surprised it only gave him three days to leave. Instead, he and his roommates stayed the month.

Yet the news stories weren’t the only attention the escape received. Within the snake-lovers community, the fact that he’d somehow allowed his python to get loose was definitely frowned upon.

“The kind of people that own big snakes should not lose them,” he said, adding that the reaction “was definitely warranted.”

There were five people in the house at the time of the big show. Now they’ve gone their separate ways.

Roommate Elliot Barrington, who shared some of the limelight on the day of the escape, is left without a permanent place to stay. He was recently looking for couches on which to crash, and using his notoriety as the-guy-who-lost-his-house-because-of-the-escaped-python to help his effort.

“I completely feel screwed,” Barrington said, though he allowed he and his brother, also newly homeless, weren’t technically on the lease.

And it’s not all bad news.

“I’m getting a shot at that dream of mine of hitchhiking and being on the road, ala Jack Kerouac.”

As for Dennis, he said he has a condo he can stay at in San Luis Obispo, but he was still working on a place for Clarice.

One prospect: Dennis is hoping to start a reptile shop in San Luis Obispo. Clarice could then be a featured attraction.

If that works, maybe all publicity is good publicity after all.