A spectre in the abstract 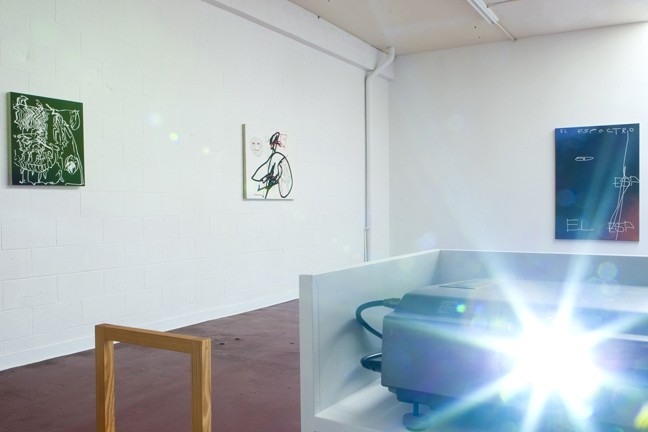 When I first get a call from Jeff Elrod, he’s making the three-hour drive to Marfa, Texas, from the nearest airport. But reception gets spotty out in the middle of the desert, so the artist promises to call back once he’s reached his studio. I’ve been warned that he’s tough to get hold of, and I’m already starting to imagine him as one of those individuals who is naturally sort of technology-repellent, like curious little Bermuda triangles.

An hour later, Elrod phones again from the Marfa studio where he works, apologizing for the delay, cheerfully cursing the long slog home. Reception’s crystal, so perhaps my judgment was too quick.

Elrod’s work is the sort of thing that looks easy, almost accidental, but is actually painstakingly rendered. The artist’s paintings are first conceived in Photoshop, but from there the process gets steadily more low-tech. The works are projected onto canvas, and Elrod carefully traces them with tape, then paints in the lines.

This is how he came up with the organized chaos of Don Quixote and Jack White, both part of his current show “El Espectro”—literally “the ghost”—at Compact.

Jack White, a squinting, energetic, red and black scribble on white canvas, was painted the way the White Stripes make music, says Elrod, “sort of three-chord, minimal, monochromic. There’s a terseness to it.”

El Espectro, the show’s title piece, calls to mind a digital breed of automatic writing, as if Elrod sat at the computer, closed his eyes, and called upon supernatural forces to guide his mouse across the screen. White, mostly unbroken lines spasm into the shape of the letters ESP against a murky background of blue, purple, and gold.

Eyeing a photo of a work titled Loading, I suggest to Elrod that his paintings resemble what Pollack would have come up with in Microsoft Paint. The artist just laughs, before clueing me in on a catchphrase that was going around like a head cold a few years ago among graphic artists in his onetime home of New York: “Matisse with a mouse.”

But while Elrod’s images are born in a computer program, he doesn’t like to be seen as a “graphic” artist. “That’s not what’s cool about my painting,” he insists. What’s cool about it, really, is his method of consistently capturing the digital “look,” then bludgeoning it over the head and dragging it back to the familiarity of his analog turf.

The artist’s short film, projected onto the wall at Compact, isn’t quite a film in the usual sense. It’s in a style called “direct animation,” a Beat-era filmmaking technique of literally scratching drawings into film. (No camera required!) It’s Elrod’s first filmmaking endeavor, and a logical step for someone whose paintings are often packed with frenetic energy, waiting to break out. His next project takes it further: projecting his pieces of abstract cinema onto canvasses as moving paintings.

Earlier in his career, Elrod says, he was obsessed with “supergraphics,” meaning those huge double or triple lines that ran rampant through the architecture, interior design, and fashion of the 1970s. He pointed out that supergraphics often functioned almost as an apology for the hulking ugliness of industrial buildings.

“It hides the brutality,” he says.

The artist’s minimal style developed as an ironic response to the huge, simple, earnest lines of the ’70s.

Elrod doesn’t maintain a website, and he first used a computer at the age of 30. Most days, the artist rises at noon and works in his studio until 2, or 3, even 4 in the morning. He keeps a television on in every room, he says, so as not to miss anything when walking from room to room. He doesn’t actually watch, though. Mostly he just listens.

After thanking Elrod for the interview, I realize my (usually reliable) digital voice recorder has mysteriously picked up only my voice, while his is as muffled as a ghost smothered in fur. Probably operator error, though I prefer to believe it has something to do with Elrod’s mysterious effect on technology. I glance at my notes: sparse like desert shrubs. They’re going to have to do.