A step up or a sellout?

Ausra pulled out of its solar project in the Carrizo Plains so unexpectedly the sale even had longtime critics wondering whether the move was for better or worse. The Palo Alto branch of the company announced it would sell the 177-megawatt Carrizo Solar Energy Farm to Arizona-based First Solar for an undisclosed amount on Nov. 4. Although the sale was widely praised by First Solar representatives as the panacea environmentalists were waiting for, there are still hanging questions among critics of Ausra’s former project. The biggest: Will the new project be any better?

The sale was announced almost exactly two years after Ausra partnered with PG&E to help that company meet its state mandates to increase renewable energy under the California Global Warming Solutions Act of 2006. 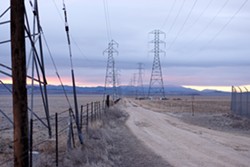 Officials from Ausra and First Solar stuck to talking points about the deal and wouldn’t comment in detail. According to Ausra representatives, the company sold the project as part of a new companywide strategy to focus on manufacturing thermal solar equipment rather than building large solar power plants. Representatives from First Solar said the purchase of Ausra’s 640 acres—on top of the existing 4,200 acres to which they already have access—gives their Topaz Solar Farm project layout more malleability.

For the most part, many out of the myriad groups watching the solar developments in the Carrizo were hesitantly pleased with the sale. With Ausra’s project out of the picture—the only one boasting a planned steam generator and other industrial facilities—much of the visual and noise impacts vanished. The sale should also provide more opportunities for countering the environmental impacts of city-sized solar arrays.

Ausra’s non-traditional project design, which employed a combination of solar mirrors and steam generation to create power, put the project under state jurisdiction—specifically the California Energy Commission. County officials only had authority over the other two projects on the plains, proposed by First Solar and SunPower.

SLO County Supervisor Jim Patterson, whose district includes the Carrizo Plains, is a strong proponent of renewable energy and could easily be the most outwardly progressive solar advocate on the board of supervisors. Following the announcement of the sale, he was unabashedly excited.

“It puts the permitting … in the county process as opposed to the California Energy Commission,” he said, “and I see that as an advantage.”

In fact, even Ausra critics—such as Robin Bell of the Carrisa Alliance for Responsible Energy—were optimistic immediately following the sale.

“I was surprised that they were just pulling the project,” Bell told New Times.

“I just don’t understand if they just don’t get this whole concept of the [wildlife] corridor, or if they are giving the environmental community so little credit that they think they can just spin this into a good thing and we’re going to buy it,” Bell said in another interview.

Ausra’s project, the Carrizo Solar Energy Farm, was by far the smallest and most analyzed of the projects proposed in the area. Environmentalists worried it would sever migration paths in the sensitive habitat, particularly those of the San Joaquin kit fox and the pronghorn antelope. According to Bell, nothing’s really changed: “It’s kind of insulting.”

An early proposal by First Solar would fence off about 4,000 acres using the newly acquired land from Ausra, according to a company proposal submitted to the county. First Solar spokesman Alan Bernheimer told New Times the additional land would help prevent building on lands preserved for agriculture and cutting off wildlife migration paths.

County Environmental Resource Specialist Trevor Keith couldn’t say exactly how the new project will look or whether it will actually avoid impacts, as First Solar representatives assure. Though First Solar provided an early proposal, nothing official has been filed yet.

“We’re really waiting to see what they come in with this,” Keith said.

Perhaps one of the greatest losses has been the coffer of resources state officials had with which to analyze impacts. Though the state was technically only reviewing Ausra’s project, much of the analysis was cumulative for all three projects. The energy commission fronted the cost of a wildlife corridor study using its special power-plant-citing funds. But those funds won’t be available to the county, and the study is only about a third complete. Keith said it will continue at the local level, with First Solar paying for the additional costs.

Energy commission Project Manager John Kessler said of the corridor study, “This is vital information needed in order for the [California] Department of Fish and Game and [U.S.] Fish and Wildlife Service to issue their permits.”

Both agencies need to approve the proposed solar project before it can go ahead.

Energy commission officials were also about to release a staff assessment of the project for public comment. The assessment would have included a calculation method to determine what would work for environmental mitigation, one of the crucial points for all solar projects in the area. Kessler said the assessment was “on the brink” of being released for public review but, “There won’t be any document now.”

The nonprofit Science and Collaboration for Connected Wildlands was conducting the corridor study. But with the energy commission—and more importantly, its funding—nullified by the sale, the study is on hold. Conservation Director Kristeen Penrod stressed the importance of that study and said she hopes it picks back up but, “At this point I can’t count on it.”

According to Keith, First Solar may hire a different consultant with a different methodology. But, he said, nothing has been approved yet.

“We’ll still do a very thorough assessment of the cumulative impacts of the two projects that are still on the table,” he explained.

In that sense, county officials will have more say on the projects proposed for county land.

“And I think what this means is that the county really has to be the first and last word on this analysis,” said Babak Naficy, an environmental attorney who intervened in the energy commission review of Ausra’s project. “So it puts more responsibility on the county.”

Indeed, the fate of the corridor study is the most significant priority for people concerned with environmental impacts if and when fields of solar panels cover the plains.

“My concern is that because this is a step in the right direction that it might be perceived as the final answer,” Naficy said. “Sort of like now that Ausra is out of the picture, maybe the remaining impacts are not really serious. … I hope that won’t be the perception that with Ausra out of the way everything’s hunky-dory and there’s nothing left to worry about.”