When it comes to food, Mattia Tedeschi and Filippo Giordano believe that it is “far better to be authentically American than fake Italian.”

The recent immigrants, both in their late 20s, are proud of their Italian upbringing in the northern valley city of Reggio Emilia. Their food, however, is not all prosciutto di Parma and fettuccini. It is, in reality, the stuff of SLO Town sub sandwich legacy. 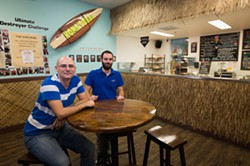 Yes, we are speaking of none other than Kona’s deli, home of Cal Poly- and Cuesta-approved sandwiches piled high with turkey, pastrami, roast beef, jalapeños, and crunchy-crispy bacon. With the amount of sando topping on the menu, I could go on and on.

The duo took over ownership of the 25-year-old Tiki-themed restaurant in in June, thrilled at the relatively low taxes and hurdles compared to their homeland.

Since then, the pair has fully embraced the micro-culture of Foothill Boulevard, and proof of that is written on the wall. Every week, there’s a new challenge beckoning exceptional eaters to try their luck scarfing down two Destroyer subs—packed with turkey, ham, pastrami, salami, roast beef, pepperoni, and provolone cheese. The goal is to eat both in less than 17 minutes. Photos of previous winners are displayed with pride.

The lifelong friends share a good laugh as they recount how a customer recently broke the original record of 20 minutes.

“We think it’s a great way to get people into the restaurant, and it’s pretty funny,” Giordano said. “The problem comes when people go in for the second sandwich. There is a lot of bread and meat involved.”

The restaurant owners first visited California in 2008. On the advice of a friend—the Cal Poly graduate who created Evo Water—Tedeschi and Giordano stopped in SLO, marveling at the friendly vibe and landscape, both similar to their faraway hometown.

“There’s a real downtown, a real community here. When you go to other larger cities, you see commercial area after commercial area,” Giordano said. “We found something special in SLO.” 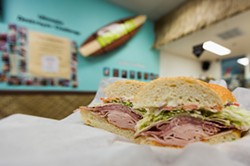 Although the friends don’t plan to mess with the beloved menu, they certainly aim to add a few upgrades. Giordano’s folks own and operate an upscale eatery back in Italy, and Tedeschi grew up on the town’s locally produced artisanal goods. It’s safe to say both men know a thing or two about quality.

“Back in Reggio Emilia, we have lots of fresh cuts of meat, with products created in little areas of our city. This is why we would like bring in more local ingredients to Kona’s,” Tedeschi said, adding that the menu consists of about 50 percent local goods.

The owners also underscored the fact that prices will not change. With so many local college kids depending on their reasonably priced grub (Kona’s is the official sandwich of the Cal Poly Mustangs), it just wouldn’t be right.

“We decided to purchase a business that was famous and known in the community and loved by the college students, and we love that,” Tedeschi said. “We want to continue to improve Kona’s, because we know there are plenty of famous sandwiches in SLO, and we want to keep up and put our sandwiches at the top.”

That means made-to-order meals; high-quality meats, cheeses, and produce; and fresh-baked bread sourced from Edna’s Bakery. In 2011, the restaurant building was damaged by fire but has since been restored. Dried hula grass material and faux bamboo keep the Central Coast surfer vibe alive. It’s young and fresh—not unlike Tedeschi and Giordano.

“We feel we can take what we have learned and experienced in Italy and work to improve the sandwiches and add a few new ingredients,” Tedeschi said. “However, we won’t ever change Kona’s too much. With sandwiches this famous, why mess with that?”

And a call to you steel-stomached women out there: A female has yet to win the infamous Destroyer challenge. Let’s show ’em how it’s done.

Renegade winemakers bust out of the garage!

If the annual Garagiste Festival were a record label, it would be small and independent, the kind of label that put out its own friends’ bands and little-known groups. It would be blissfully underground, and it would be proud of this fact.

The wine tasting event, dedicated to spreading the word about producers making just 1,500 cases per year or fewer, is about more than the trendy idea of “boutique.” It’s about giving small-lot producers a chance to shine, share the fruits of their labor, and maybe even gain a larger audience.

Note: The term garagiste comes from the French word for “garage”—a place that many small producers still call their “winemaking facility/office/tasting room.”

“Because these producers are small, they don’t have the time or resources to be marketing their wines the way they should,” Minnick said. “We gather up these small wineries with people who love to find new wineries. We’re like a matchmaker, and everyone is happy when we do our job.”

More than 75 wineries will pour at this year’s event, held at the Paso Robles Event Center, Atascadero’s Carlton Hotel, and Templeton’s First Crush Nov. 6 to 9. About 35 percent of those producers are complete newbies to the experience.

“Most don’t have tasting rooms; this whole thing is about discovery,” Minnick said. “Even if you have been to one of the Garagiste Festivals in the past, there is always so much new stuff at every event. You are always going to be finding something new.”

Tasters can expect a rainbow of varietals, blends, and winemaking styles from a range of producers hailing from SLO and Santa Barbara County to across the country. Many of these wineries, as Minnick warns, tend to blow up to rock star status in a blink of the eye.

“Every year, we see many producers pour their very first vintages. If you find something you love, you have the opportunity to get on their list early,” Minnick said. “We are changing perceptions by showing people just how big and robust and explosive this movement is.”