A survivor's story: Mother and son reflect on her 2005 fight with breast cancer

I vividly remember the day I got the news. I was in my ninth grade Spanish class and my sister, Lisa, appeared outside the classroom, looking solemn. I immediately felt a pit in my stomach. My mom, Terri, was awaiting breast cancer test results.

When Lisa confirmed in that school courtyard what I felt in my gut, that mom had breast cancer, it marked the beginning of an unforeseen and scary experience for our family. I felt like a pretty normal high school freshman until that day. When cancer strikes, things move quickly. Big decisions are made fast. Surgeries and treatments get scheduled. The mood of a home fluctuates like a roller coaster. Everyone involved goes through an intense emotional journey. It's hard to fully describe and quantify the impact that cancer has on its victims and their loved ones. And though I'd never wish it again, it's also true that there were silver linings. I grew closer with my mom, was forced to mature into a more selfless person, and even honed my sense of humor, as I realized how levity and laughter were critical to healing.

Thankfully, my mom continues to prevail in her fight against cancer. For this week's awareness issue, I asked her (and she generously agreed) to reflect on the experience.

Peter Johnson: When did you suspect you might have breast cancer? What made you decide to go in to get screened?

Terri Lobdell: I probably would not be alive today if I hadn't done a self-exam of my breasts in November 2005. The lump was hard and gravelly, nothing like normal breast flesh. My hand jumped away like a hot stove. How could this be? Only five months earlier I had a clear mammogram. I did not sleep that night. I knew it was cancer. At my doctor's the next day, she felt the lump and became solemn. She did a needle biopsy, and told me to expect a call with lab results in four to five days. 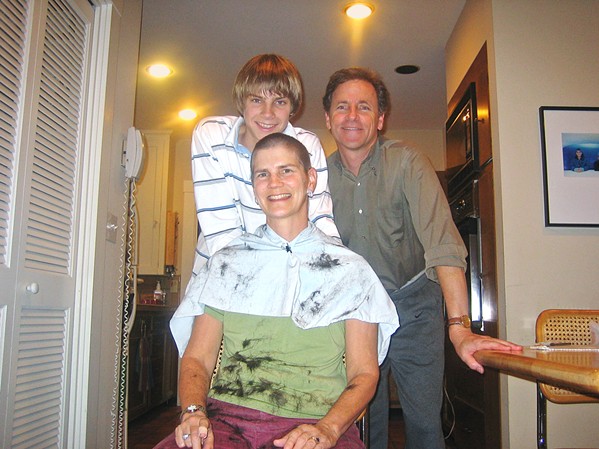 PJ: When you were diagnosed, what was your first thought? What stage was the cancer and how aggressive was it?

TL: When the doctor called to tell me that I had cancer, my first thought was, "I want this cancer out of my body as soon as possible. I want to live. Whatever it takes." I understood very little about breast cancer when I was diagnosed. I assumed I would be "battling cancer" until I died at a too-early age. I didn't realize that most people with breast cancer end up living normal lives after treatment. While my breast cancer type was particularly aggressive and hard to treat if it recurs or spreads, fortunately it had not yet established itself in any lymph nodes or parts of the body that breast cancer travels to (brain, bones, liver, or lungs). My cancer was categorized as stage 2, mainly because of the size of the tumor.

PJ: What are the challenges of deciding on a treatment plan?

TL: The first big and very personal decision was what kind of surgery to have. The choice was either mastectomy or lumpectomy. If I chose the latter, I would need radiation after chemo and it was possible that a mastectomy would be in order after all. If I chose the mastectomy, I wouldn't need radiation. But then I would also have to decide whether I wanted breast reconstruction. I had a strong gut feeling about which way to go, and that was to have a bilateral mastectomy and no reconstruction. This surprised the doctors, which surprised me. It wasn't a hard decision for me to make, though it was a deeply sad one. I went back to my first thoughts after diagnosis: The quickest way to get the cancer out was to have the mastectomy without the reconstruction (otherwise we'd need to coordinate with a plastic surgeon). This had the benefit of limiting me to one major surgery and no radiation. Though I miss having breasts nearly every day, I am at peace with the decision. I am highly aware that most other women make a different choice, and I believe it is just such an individual set of calculations to make. No right or wrong way, and no good way, really.

TL: Chemo was not as difficult as I had imagined it, though it was a long slog. I prepared for it (like for childbirth) by talking with friends who had gone through it before, read books, and talked to oncology nurses. Mostly it felt like a strange flu the first few days. After that I would revive a bit. I lost my hair (including eyebrows and the rest), took on a yellow-green skin tone, and was still getting used to having no breasts. I would look in the mirror sometimes and wonder just who that was looking back at me. It was a very weird feeling. I didn't feel entirely like myself.

TL: My deepest wish was that both kids would be able to continue with their lives as before. Almost immediately I realized that was not going to happen. Both you and Lisa were upset, worried, wanted to be included, and do what you could to help. While I worried and felt guilty at some level about disrupting your young lives, my heart was also so filled with love as you responded with such obvious care and compassion. I also immediately recognized your own need for reassurance that I was OK, and I knew you would be looking to me and your dad for that. Yet I was often consumed with my own fears and the many logistical demands and disruptions in my own life; I feared I could not summon the wherewithal to mother you adequately during this time. I especially did not want my own fears to become contagious, knowing I probably couldn't control that. It was tough to try to be the kind of mother I wanted to be in the midst of this storm, and I worried a lot about the impact on you.

PJ: What were the things that gave you hope, strength, and comfort during your fight?

TL: Mostly it was family and friends. One of my strongest memories of daily comfort was watching Friends episodes with you. You loved to hear me laugh, and thought Friends would do the trick. It did! We laughed a lot together every day, and it was one of my favorite times even on the most miserable days. I also took advantage of some amazing services available through the Stanford Cancer Center (free of charge to anyone in the community). These included restorative yoga, a writing group, Healing Touch, art therapy, and guided imagery sessions. All of these allowed me to discover new pathways into important learning and growth. I also read voraciously during cancer treatment. I mostly read about the connections between emotions and physical health, but also about Buddhist philosophy and other spiritual practices. I read about relationships, drawing boundaries, and creativity. I had become very thirsty for knowledge, about how to better understand myself, how to nurture sides of myself that I had long ignored, and how to gain a more accepting attitude toward death in general.

PJ: October is Breast Cancer Awareness Month. What's something you think people should be aware about the illness?

TL: All women should do self-exams regularly. If anything doesn't feel right, see a doctor! If you are diagnosed, don't hesitate to seek support from your family, friends, religious communities, nonprofits, books, health clinic, etc. If you know someone who has been diagnosed with cancer, don't hesitate to take action to show support. Send a card, book, or small gift; sign up to bring a meal; offer to visit or go for a walk. Don't judge the choices someone diagnosed with breast cancer makes. We are all different in how we handle a health crisis.

PJ: You've been cancer-free for over a decade. What does it feel like as cancer gets further in the rear-view mirror?

TL: It feels really, really good to be almost 13 years without cancer. My oncologist has declared me "cured." Of course I'm now 65, so I'm well aware there are no guarantees. But it's wonderful to put cancer this far behind me. I feel very grateful for that. I was always hoping I'd get to see my kids into full adulthood, and that has come to pass. Δ

Assistant editor Peter Johnson is feeling proud of his mom at pjohnson@newtimesslo.com.